Informationsdienst Wissenschaft (scientific information service) is the news portal for up-to-date information from science and research. It brings together the scientific community and the public by publishing news items and schedules of events from its 1,000 member institutions and by distributing them some 42,500 subscribers, including 9,000 journalists.

More than 445,000 press releases and 70,500 events in idw's archives are available free of charge to anybody.

We also offer an expert finder which enables journalists to find suitable specialists in various fields. Established in 1995 as one of the first e-mail services for journalists, it is today a non-profit organisation with offices in Bayreuth, Bochum and Clausthal. 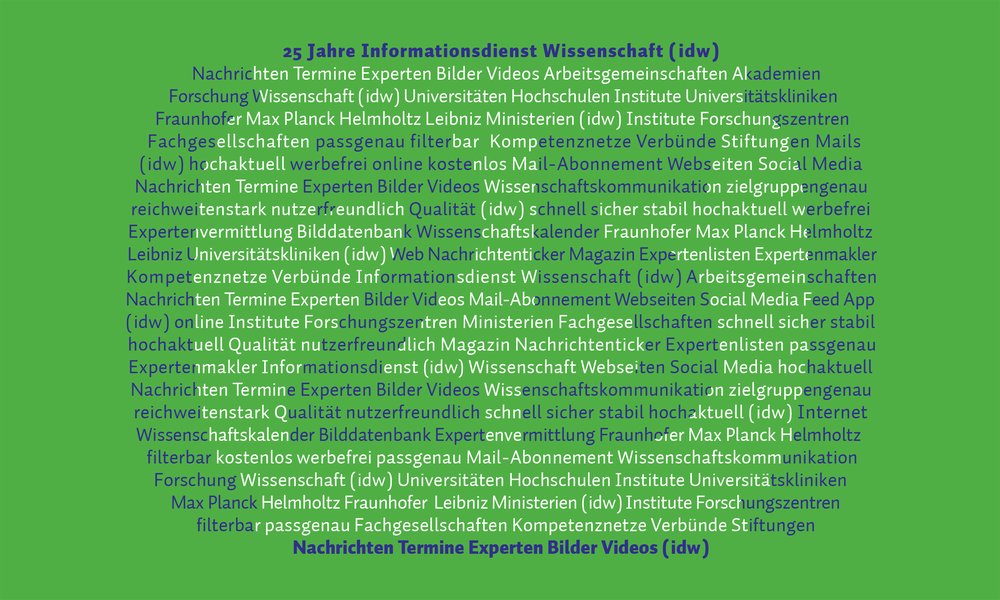 This was followed by the first website in 1995. The German Federal Ministry of Education and Research (BMBF) funded the further development of the project for three years, starting in November 1996. The internet platform, by then operating under the new name of “Informationsdienst Wissenschaft” (idw, scientific information service), has been financed since 2000 by the attached press offices. idw continued to extend and develop its programme, for example by adding a new website based on a database and the scientific calendar, in which its members were now also able to announce their events.

Informationsdienst Wissenschaft has been a registered association under German law with an annual general meeting since 2002. Since then, it has been supervised by a honorary Board of Directors. A team of permanent employees has been involved in the association’s operational business from the very start. Today, it employs a staff of eight part-time and two full-time at its three offices in Bayreuth, Bochum and Clausthal, Germany.

Updating and developing the system has always been one of the main tasks. In 2003, the first list of experts was compiled, and idw has been present as an exhibitor at various annual science conferences since 2004. In 2005, RSS feed and announcements under news embargo were introduced. Individual statistics for every press release, in order to facilitate monitoring for the members, were added in 2007.

The idw Award was introduced in 2008 in order to foster quality in science communications. Since 2010, it has also been present on Twitter, and on Facebook since 2011. The website has been completely redesigned and relaunched in 2013.

Since 2021, there are news apps for iOS and android mobile devices, through which the news search can be filtered more finely and quickly.

These instructions will help you with login or password problems. If you have set up an idw account, [...]

The winners of the idw Award for the three best press releases from 2021 are: