Changes of cosmic rays caused by variations of the solar activity on time scales of a few days do not induce any changes of the global or regional cloud cover. This is concluded from a recent analysis performed by a Swiss-German collaboration. Thus, it is unlikely that cosmic rays influence climate. (Geophysical Research Letters 37, L03802, 03.02.2010)

Clouds play a double role in the Earth's climate. On the one hand, they reflect back to space sunlight shining on the Planet; on the other hand clouds reduce the heat radiation from the Earth's surface into space. Depending on their altitude and properties, therefore, clouds are effectively warming or cooling climate. According to the present perception, the net effect is cooling.

Some years ago, Danish scientists hypothesized that galactic cosmic rays influence the global cloud cover. They derived this hypothesis by evaluating cosmic ray and cloud data over a solar cycle. During an 11-year solar cycle, the Sun's activity and thus the sunspot number increases and decreases again, which causes the strength of the magnetic fields, frozen in the solar wind and deflecting cosmic rays, to vary accordingly. As a consequence less cosmic radiation reaches Earth at high solar activity. Since the overall solar activity increased during the last century, the Danish authors assumed that the cloud cover and hence the cooling by clouds decreased. They speculated that this effect represents a major cause of the observed global warming. An intense, controversial and still ongoing debate followed.

To test the cosmic ray cloud connection hypothesis independently, the Swiss-German collaboration (scientists from the University of Bern, from EWAG and Frank Arnold from the Max Planck Institute for Nuclear Physics, MPIK) recently analyzed so-called Forbush decreases. These events, generated by sporadic solar eruptions, are characterized by a sudden decrease of the cosmic rays penetrating into the Earth's atmosphere, which recovers again within a few days. The decrease is similar in amplitude as at the maximum of the solar cycle.

The group around Frank Arnold has studied the formation of aerosol particles from ions by laboratory experiments. They found that the atmospheric ions grow preferably via uptake of gaseous sulfuric acid molecules. After sufficient growth, the ions may become stable but still very small aerosol particles. These may grow further, preferably by uptake of sulfuric acid. As demonstrated by MPIK laboratory measurements, gaseous sulfuric acid is formed in the atmosphere from sulfur dioxide, which stems mostly from fossil fuel combustion and volcanism. However, as revealed by aircraft-borne measurements made by MPIK in close collaboration with DLR (German Aerospace Center), sulfuric acid is formed in the atmosphere only rarely in sufficient amounts to allow the tiny aerosol particles to grow to the size of cloud condensation nuclei. Therefore, the limited supply of sulfur dioxide is a bottleneck of cosmic-ray mediated cloud formation.

So it seemed consequential to calculate the ion concentration in the atmosphere from measured data of the galactic cosmic radiation and to compare it with satellite data of cloud cover. As a result of the analysis of 6 pronounced Forbush events it can be stated, that the temporal changes of ion concentration and cloud cover are totally uncorrelated. For no cloud layer, the researchers of the Swiss-German collaboration could find global or regional effects, neither for a single event nor averaged over all 6 events.

The scientists have only taken into account such Forbush decreases that were undisturbed by other effects. They calculated for all 6 events during each 20 days at every 3 hours the ion concentration in a 5°×5° grid over the globe and the entire troposphere. Then they compared these values with the also 3-hourly available satellite data of the cloud cover in 3 altitude layers. They evaluated only relative values to avoid possible systematic measurement errors to play a role. The method is sufficiently sensitive to detect effects on the scale postulated by the Danish scientists.

The trace gases sulfuric acid and sulfur dioxide as well as sulfuric acid containing gaseous ions are present all over in the troposphere, the weather layer of our atmosphere. This could be demonstrated by the Max Planck researchers around Frank Arnold in close collaboration with the DLR (German Aerospace Center) using aircraft-borne measuring instruments. The photograph shows the DLR research aircraft Falcon, which has been deployed for this purpose, during the preparation of a measurement flight. Photo: Frank Arnold, MPIK 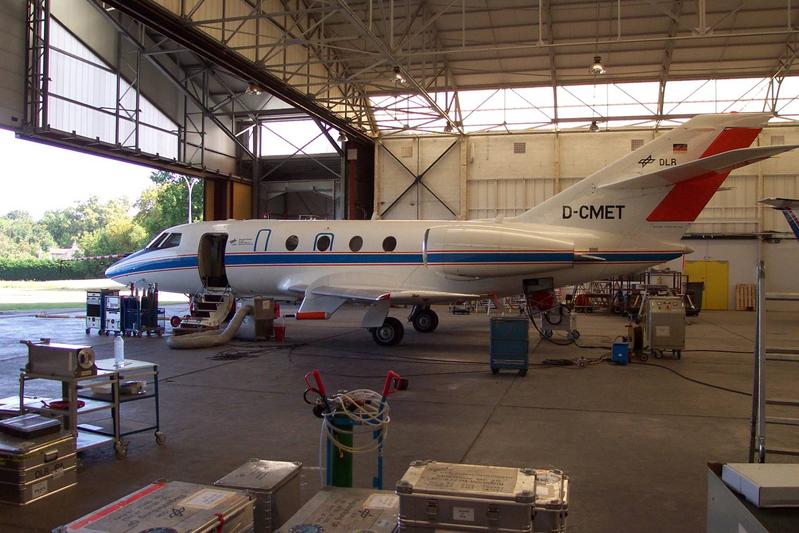