Comets, also named “dirty snowballs”, are largely composed of water. An international research team around Andreas Wolf, of the Max-Planck Institute for Nuclear Physics in Heidelberg, Germany, recently succeeded deciphering an important aspect of the way by which water molecules often form in space. As a surprise, the water molecules produced under cold, dilute conditions turned out to be produced as particles as hot as 60,000 Kelvin. In their research the physicists, though, did not use a telescope, but a particle accelerator (Physical Review Letters, 3 September 2010)

In comets as well as in interstellar clouds, the precursor molecule of water is the positively charged hydronium ion H3O+. This molecular ion can be detected from earth by telescopes. In the cosmic clouds negatively charged electrons are also present, causing frequent collisions. In those the hydronium ion converts to the neutral instable radical H3O, which rapidly decays. “For this break-up reaction, nature offers three choices”, describes Andreas Wolf: forming either H2O plus H, or OH plus H2, or OH plus two H atoms. Present research tries to determine the yields of these production channels, including that of water.

Wolf and his colleagues investigated this question by reproducing the electron attachment in the laboratory. They used the Heidelberg Test Storage Ring, a racetrack of sorts, with a 55-meter circumference, on which charged particles race around, guided by magnets.

It is into this ring that the scientists direct the hydronium ions which, more precisely, carry heavy hydrogen atoms in order to render them more suitable for the experiments performed. At one position of the ring, electrons are admitted in addition, which then proceed together with the ions over a straight length of almost two meters and then leave the racetrack again. This happens on each turn, that is several hundred thousand times per second.

In the electron bath, similar to the process in space, electrons attach to the hydronium ions, thus forming rapidly decaying neutral molecules. The fragments from this process do not carry any net electric charge. Hence, they do not feel the magnetic field keeping the ions on their circular orbits and rather continue their straight motion. At the place where they leave the racetrack, Wolf's research team has positioned a detector that records the impacting fragments. This single-particle counter has been created in collaboration with colleagues from the Weizmann Institute of Science in Rehovot, Israel.

In up to one thousand snapshots per second, the detector records the masses and the momenta of all fragments from individual molecular breakup reactions. With these data, the molecular dynamics triggered by the electron attachment and leading to the fragmentation can be reconstructed exactly.

The first important result: 16.5 per cent of all decays following the electron attachment lead to the water molecule. “This is quite a high number”, says Wolf. “Electron attachment to hydronium ions can well be the most important pathway for water production in interstellar clouds and comets.”

Most frequently, with a yield of 71 per cent, the hydronium ions in this experiment are found to break up into three fragments, namely OH and two hydrogen atoms (in their heavy-hydrogen equivalents). The researchers can now understand the reason for this behavior. Its origin is the large binding energy released by the attachment of the electron. The entire molecule feels this binding energy and starts a vibration similar to a spring one stretches and then releases. “To general surprise we found that the water molecules vibrate with about the maximum energy which they can possibly support”, says Wolf. With this, each water molecule resulting from the electron capture is close to rupture: the cause for the three-body fragmentation to become that frequent.

The high vibrational energy observed can be converted into a temperature. It results in about 60,000 Kelvin: water is created truly hot.

The new evidence has further consequences. On the one hand, it provides input for computer models which reproduce the complex chemical reaction network in interstellar clouds. On the other hand, it explains mysterious signatures found by astronomers in the infrared spectra of some comets. These signatures indicate the infrared radiation emitted by hot water molecules during stepwise “de-excitation” of strong vibrational motion. Not of the least interest are, finally, the detailed conclusions that can be drawn from the molecular breakup experiments about the electronic processes in a hydronium ion, which serve as input for quantum mechanical models of these molecules.

<
Fig. 1: Breakup on three pathways. A hydronium ion captures an electron and can then split into diff ...
Graphics: Max-Planck-Institut für Kernphysik
None

Fig. 1: Breakup on three pathways. A hydronium ion captures an electron and can then split into different combinations of fragments. The relative yields of the three pathways are shown as measured for the heavy hydronium ion D3O+. The capture produces the unstable radical D3O with the captured electron in a weakly bound (Rydberg) state. 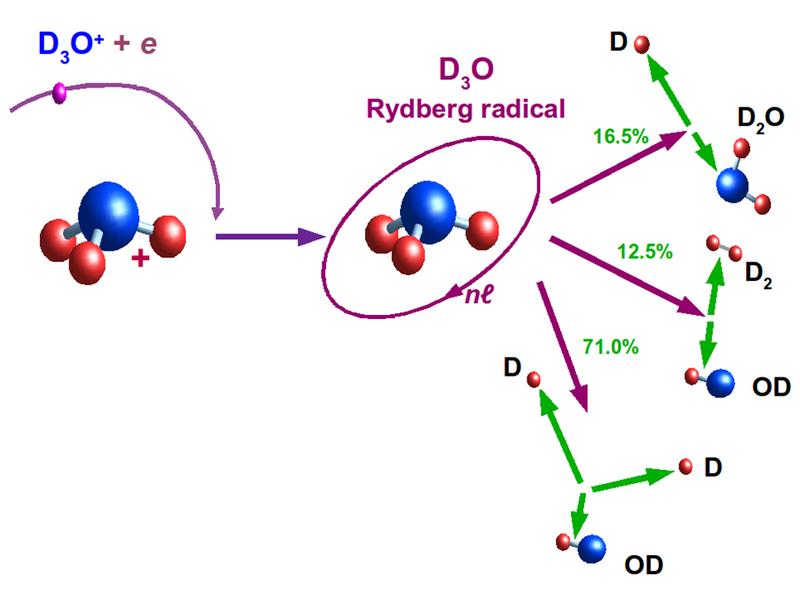