Researchers at Johannes Gutenberg University Mainz (JGU) and the Helmholtz Institute Mainz (HIM), together with their colleagues from the Max Planck Institute for Nuclear Physics in Heidelberg and the GSI Helmholtz Center for Heavy Ion Research in Darmstadt, have observed spin quantum-jumps with a single trapped proton for the first time. The fact that they have managed to procure this elusive data means that they have overtaken their research competitors at the elite Harvard University and are now the global leaders in this field. The result is a pioneering step forward in the endeavor to directly measure the magnetic properties of the proton with high precision. The measuring principle is based on the observation of a single proton stored in an electromagnetic particle trap. As it would also be possible to observe an anti-proton using the same method, the prospect that an explanation for the matter-antimatter imbalance in the universe could be found has become a reality. It is essential to be able to analyze antimatter in detail if we are to understand why matter and antimatter did not completely cancel each other out after the Big Bang - in other words, if we are to comprehend how the universe actually came into existence.

The proton has an intrinsic angular momentum or spin, just like other particles. It is like a tiny bar magnet; in this analogy, a spin quantum jump would correspond to a (switch) flip of the magnetic poles. However, detecting the proton spin is a major challenge. While the magnetic moments of the electron and its anti-particle, the positron, were already being measured and compared in the 1980s, this has yet to be achieved in the case of the proton. "We have long been aware of the magnetic moment of the proton, but it has thus far not been observed directly for a single proton but only in the case of particle ensembles," explains Stefan Ulmer, a member of the work group headed by Professor Dr Jochen Walz at the Institute of Physics at the new Helmholtz Institute Mainz.

The real problem is that the magnetic moment of the proton is 660 times smaller than that of the electron, which means that it is considerably harder to detect. It has taken the collaborative research team five years to prepare an experiment that would be precise enough to pass the crucial test. "At last we have successfully demonstrated the detection of the spin direction of a single trapped proton," says an exultant Ulmer, a stipendiary of the International Max Planck Research School for Quantum Dynamics in Heidelberg.

This opens the way for direct high-precision measurements of the magnetic moments of both the proton and the anti-proton. The latter is likely to be undertaken at CERN, the European laboratory for particle physics in Geneva, or at FLAIR/GSI in Darmstadt. The magnetic moment of the anti-proton is currently only known to three decimal places. The method used at the laboratories in Mainz aims at a millionfold improvement of the measuring accuracy and should represent a new highly sensitive test of the matter-antimatter symmetry. This first observation of the spin quantum jumps of a single proton is a crucial milestone in the pursuit of this aim.

Matter-antimatter symmetry is one of the pillars of the Standard Model of elementary particle physics. According to this model, particles and anti-particles should behave identically once inversions of charge, parity and time - referred to as CPT transformation – are applied simultaneously. High-precision comparisons of the fundamental properties of particles and anti-particles make it possible to accurately determine whether this symmetrical behavior actually occurs, and may provide the basis for theories that extend beyond the Standard Model. Assuming that a difference between the magnetic moments of protons and anti-protons could be detected, this would open up a window on this "new physics".

The results obtained by the Mainz cooperative research team were published online in the leading specialist journal Physical Review Letters on Monday. The article is presented as an "Editor's Suggestion." Furthermore, the American Physical Society (APS) presents the article as "Viewpoint."

The research work carried out by the team of Professor Dr Jochen Walz on anti-hydrogen and the magnetic moment of protons forms part of the "Precision Physics, Fundamental Interactions and Structure of Matter" (PRISMA) Cluster of Excellence, which is currently applying for future sponsorship under the German Federal Excellence Initiative.

<
Double-Penning trap for the storage of one individual proton and the detection of spin quantum-jumps
photo/©: Holger Kracke
None 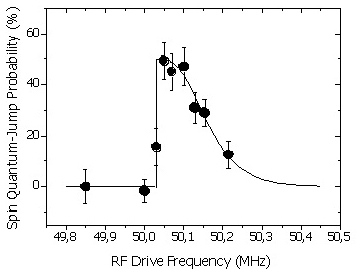