Chaos in the microlaser

Würzburg physicists have created a microlaser with unique properties. They have also succeeded in making the laser behave chaotically. In the future, it may be possible to use this for a new, secure form of data transmission.

Triggering chaotic behavior in the microcosm: this is what Stephan Reitzenstein and his team from the Institute of Physics at the University of Würzburg have achieved in collaboration with their Israeli colleague Ido Kanter, as reported on in the latest issue of the journal “Nature Communications”. Using a tiny laser, the researchers continually sent a fraction of the emitted light back into the laser, throwing the light emission process “out of kilter”. The microlaser then started emitting light particles (photons) in a chaotic pulse sequence.

“This chaos is extremely interesting from a fundamental physics point of view,” explains Reitzenstein. But the targeted feedback also offers application possibilities, he adds. “It might be used in the future for optical amplifiers and switches. In addition, the negative feedback of two microlasers over a long distance is likely to provide synchronization of the chaotic pulse sequence, enabling the realization of a new, secure form of data transmission.”

Microlasers made in Würzburg

The microlasers are made using a sophisticated procedure in the microstructure laboratory of the Institute of Physics at Würzburg. They look like tiny towers with a diameter of less than a tenth of a human hair, and they consist of a special sequence of extremely thin semiconductor layers. They are driven electrically using an elaborately designed ring contact.

During production, special nanostructures that can emit light – so-called quantum dots – are placed in the center of the microlasers. What makes them special? “The microlasers have been designed such that the photons emitted by the quantum dots are coupled into the lasing mode with extremely high probability and can therefore be used for very efficient laser operation,” as Reitzenstein says.

Close to the ultimate model

On account of their special design, the Würzburg microlasers can be driven with no more than a few microamperes and only around ten quantum dots. In conventional semiconductor lasers, on the other hand, pump currents in the milliampere range as well as some 1,000 to 10,000 quantum dots are needed.

“Intensive research is being conducted worldwide in order to create the ‘ultimate’ micro- or nanolaser that only contains a single quantum dot as a gain medium,” explains Reitzenstein. The Würzburg physicists have now come very close to this goal with their model.

Such highly sophisticated quantum dot microlasers react very sensitively to fluctuations in the quantity of light particles in the laser resonator. Even the emission of a single photon can throw the laser’s operation into confusion. The scientists turned the tables and cast the emitted light back onto the microlaser with a mirror continuously, precisely, and in a controlled fashion in order to disturb its operation.

It transpired that if the lasers emit only a few tens of nanowatts of light power, the influence of the feedback cannot be measured directly. “Instead, complex photon statistics measurements are needed to prove the expected chaotic behavior,” says Reitzenstein. But here the physicists achieved success: they were able to prove that disturbing the laser leads to a chaotic pulse sequence in which each light pulse contains only around 100 photons.

Next steps in the research

“We are currently preparing experiments to synchronize two lasers as far as the quantum limit of just one photon moving back and forth,” says Reitzenstein. “If we succeed, we will be a step closer to a fundamental understanding of synchronization and to a secure form of data transmission.”

There is also another hurdle to negotiate: at present, the microlasers only work in extremely cold conditions, at below minus 150 degrees Celsius. Operation at room temperature should be possible, however, if the quantum dots are optimized for this purpose. The physicists are currently pursuing this goal in a separate project.

Dr. Stephan Reitzenstein, Institute of Physics at the University of Würzburg, T +49 (0)931 31-85116, stephan.reitzenstein@physik.uni-wuerzburg.de

<
A quantum-dot microlaser emits light that is deliberately cast back into the laser via a mirror. Thi ...
Image: Ferdinand Albert
None

A quantum-dot microlaser emits light that is deliberately cast back into the laser via a mirror. This disturbs the laser’s operation so much so that the emission behavior becomes chaotic. On the right, the result of a photon statistics measurement from which physicists are able to detect a chaotic pulse sequence, given that without chaos no pulses would appear. 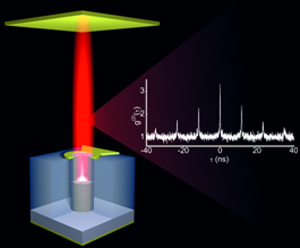