The world’s largest database on plants’ functional properties, or traits, has been published. Scientists compiled three million traits for 69,000 out of the world's ~300,000 plant species. The achievement rests on a worldwide collaboration of scientists from 106 research institutions. The initiative, known as TRY, is hosted at the Max Planck Institute for Biogeochemistry in Jena (Germany). Jointly coordinated with the University of Leipzig (Germany), IMBIV-CONICET (Argentina), Macquarie University (Australia), CNRS and University of Paris-Sud (France), TRY promises to become an essential tool for biodiversity research and Earth-system sciences.

A major bottleneck to modelling the effects of climate change at ecosystem and whole-earth scales has been a lack of trait data for sufficiently large numbers of species. The first release of the TRY database was published this week in the journal Global Change Biology. “After four years of intensive development, we are proud to present the first release of the global database”, says Jens Kattge, senior scientist at the Max Planck Institute for Biogeochemistry and lead author of the publication.

“This huge advance in data availability will lead to more reliable predictions of how vegetation boundaries and ecosystem properties will shift under future climate and land-use change sce-narios”, points out Dr Ian Wright from Macquarie University. “The TRY global database also promises to revolutionise biodiversity research, leading to a new understanding of how not only the numbers of species (biodiversity) but also the variation among species in their traits (functional diversity) together effect ecosystem functions and services.”

The availability of plant trait data in the unified global database promises to support a paradigm shift in Earth system sciences. “Global vegetation models commonly classify plant species into a small number of plant functional types, such as grasses or evergreen trees, but these do not capture most of the observed variation in plant traits”, explains Christian Wirth, Professor for Plant Ecology at the University of Leipzig, one of the initiators of the project. Indeed, analyses of the TRY database demonstrate for the first time on a global scale that most of the observed trait variation is represented by differences among plant species. In contrast, plant functional types, such as used in global vegetation models, contribute much lesser to the trait variations, for several traits only as little as 25%. This example illustrates the advantages of trait-based vegetation models, facilitating a more realistic and empirically grounded representation of terrestrial biodi-versity in Earth system models. Such models may not only be helpful to predict the development of future climate, carbon sequestration or ocean levels but also provide a basis for mitigation strategies.

The TRY initiative, developed under the auspices of IGBP (International Geosphere-Biosphere Programme) and DIVERSITAS (International Programme of Biodiversity Science), is unique as a collaborative initiative, too, being at the same time communal and worldwide. As Prof Sandra Díaz from IMBIV-CONICET puts it: “The scale of the challenges we are facing demands new ways of doing science, both in terms of the size of the networks and databases, and the high degree of collaboration.”

http://try-db.org Web-site of the TRY initiative

<
Location of partner institutes (red) and sample sites (cyan) of the TRY network.
(by J. Kattge, Max Planck Institute for Biogeochemistry, Jena)
None

Location of partner institutes (red) and sample sites (cyan) of the TRY network. 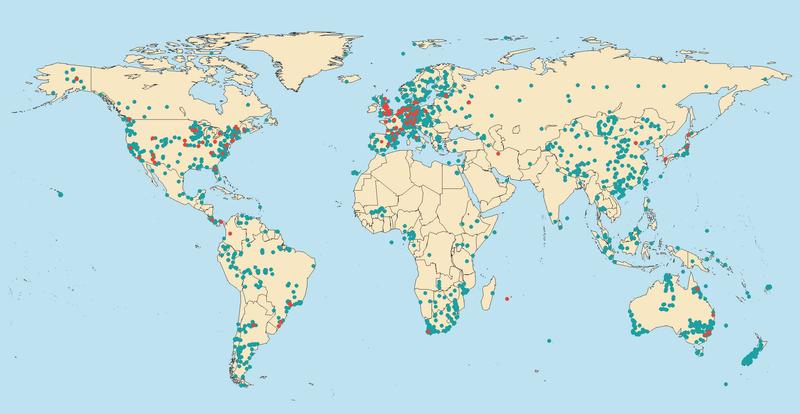