Newly discovered, rare troglobiont millipede species was completely unknown from Brazil and can faciliate the conservation of its cave habitat.

The curator of millipedes at the Zoological Research Museum Alexander Koenig (ZFMK) in Bonn, Germany was quite surprised when he received an e-mail from Brazil with photographs of a very unusual animal. The researchers of the work-group 'Subterranean Ecology and Zoology' at the University of Lavras (UFLA) in Minas Gerais, Brazil, Dr. Rodrigo Lopes Ferreira and his student Luiz Felipe Moretti Iniesta, took pictures of strange millipedes in Brazilian caves that they could not identify. The photographs showed white, translucent millipedes (see picture 1) of a very rare, basal millipede group (Glomeridesmida) which is only known from a few species, none of which were recorded from Brazil.

The Glomeridesmida, which might be around since 350–400 million years ago, belong to the oldest animals living on land and to the most ancient and basal (often called 'primitive') millipedes. Now, they are only known from 31 species, living relics; and even these are only from a few spots of habitat spread out in widely separated areas in Central America, the Caribbean and other islands, India, Malaysia and Indonesia. The last description of a new species of the Glomeridesmida was in 1975. The species of the group are so rarely encountered that the received photographs were the first pictures of living specimens.

Luckily, the Brazilian cave researches studied and conserved some of the glassy-looking animals, and quickly dispatched a few millipedes to the Research Museum Koenig in Germany. There, it was soon discovered that they represent a new, still undescribed, and for the order Glomeridesmida with 10 mm quite large, species. The description, thanks to the help of a modern scanning electron microscope, includes detailed pictures of even the smallest objects. The calcareous exoskeleton and 'armor' of the millipede is so far reduced, that the animal is transparent, an adaptation to the absence of predators in the cave habitat. The millipede’s transparency allows the study of internal anatomy, including the intestine and the eggs, for the first time in these ancient millipede group. Unfortunately, it also makes the animals very soft-shelled and brittle; they break at even soft touches. The newly discovered species is a true troglobiont, it is only found in caves, and more precisely, it is restricted to a special cave system in Brazil.

The caves in which this species thrives were originally below the lush Amazonian rainforest. However, the rainforest has been cleared by humans, so the surface above the cave system is now farmland. Now, even the species sheltered in the subterranean cave system are in danger. Until 2008 all caves were protected by Brazilian law. Since then, caves can be destroyed for mining activities when they do not shelter any animal species that only live in the cave (so-called cave endemics). Such a mining project is currently going on in close vicinity to the cave habitat of the newly described millipede. The cave which the species inhabit is not a normal cave, but a special 'iron ore cave'. Following GoogleEarth satellite images (see KMZ file) one can easily see that the surface has been greatly modified between 2006 (when the caves where still protected) and 2012

Given the circumstances,, the newly discovered cave millipede species was described as quickly as possible, so that the cave system it inhabits can be protected from the ongoing mining activities. Because the mining activities are progressing so fast, it can be concluded that the description of the randomly discovered unique ancient cave millipede appeared just in time, - five years from now the cave system and its unique inhabitants would have been extinct and gone.

The millipedes sent by the Brazilian team not only have the potential to save their species, but, thanks to the freshly collected material, the DNA of the Glomeridesmida can be studied in the future, which allows a genetic study of this ancient millipede order to proceed. In the meantime, additional Brazilian cave millipede species still await their description. 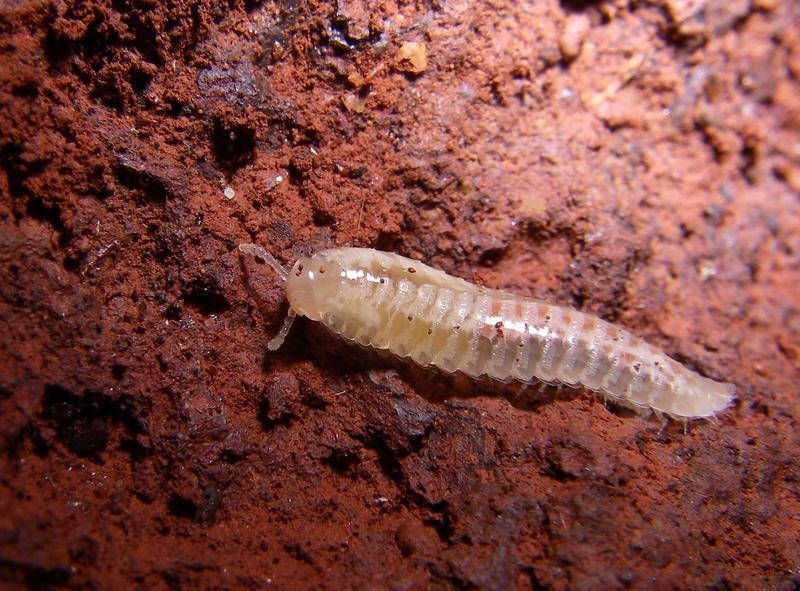 Scanning electron microscope photograph showing one body segment of the newly discovered cave millipede. The exoskeleton is very thin, except for some thicker knobs on the surface. 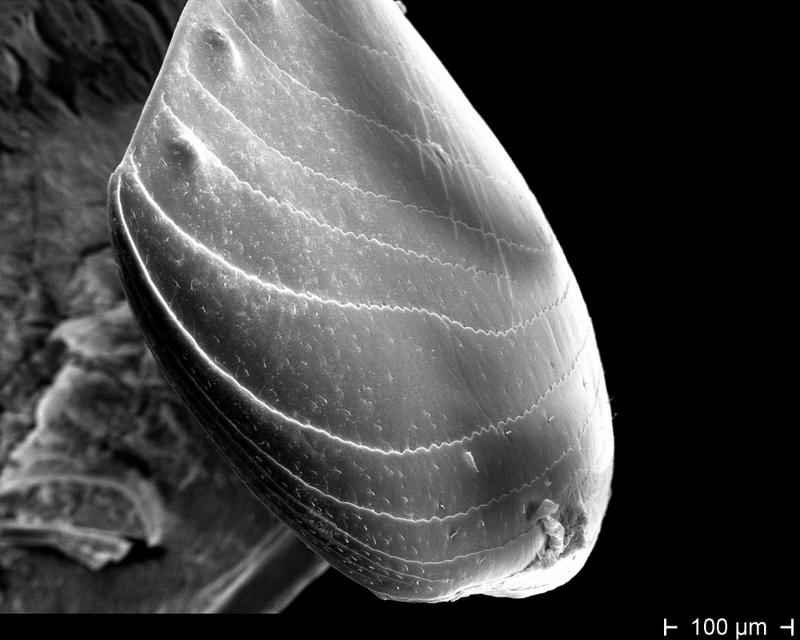