At the precision mass spectrometer ISOLTRAP at CERN/Geneva an international team of researchers succeeded in measuring the mass of the short-lived isotope zinc-82. In combination with latest neutron-star models, the new experimental data extend the view into their composition profile.
Neutron stars are compact objects created when massive stars end their lives in supernova explosions. They are considered as birthplaces of heavy elements.The results now published in Physical Review Letters demonstrate the close connection between experimental and theoretical studies and, in particular, the importance of laboratory measurements for research on astrophysical questions.

The journal has chosen a figure of the article for the cover page of the latest issue.

With diameters of just a few kilometers neutron stars belong to the most compact objects of our cosmos. They are created when massive stars have fused a large part of their nuclei to iron, the “ash” of stellar nucleosynthesis because of their high binding energy. As the fusion processes in the stars’ interiors come to an end, no heavier elements can be produced in this way. The stars collapse due to their gravitational force, light up in supernova explosions, and remain as neutron stars. According to theory, these objects consist essentially of neutrons, because the gravitational pressure „presses the electrons into the protons “. Only due to these extremely high pressures and densities which are found even in the outermost neutron-star regions – the „crust“ – heavy elements are created. The decompression of neutron-star matter by tidal effects from a merger with another neutron star or a black hole can eject these heavy-element nuclei and, thus, may contribute to their abundance in our universe. The origin and abundance of the heavy elements pose some of the most important but still unanswered questions of astrophysics.

The extreme conditions in the interior of neutron stars cannot be reproduced in laboratories on Earth. Therefore, theoretical models are used to calculate the composition of the dense neutron matter. Decisive input parameters for these computations are the binding energies of neutron-rich atomic nuclei. Through Einstein‘s best-known relation, E=mc2, these binding energies are connected directly with the nuclear masses. Thus, precision mass values of the corresponding exotic nuclei are required for the modeling of neutron-star crusts.

Up to now the composition of the outer crust of a neutron-star (for a typical star with a radius of 10km
and 1.4 solar masses) was known down to a depth of about 210m, where zinc-80 was found. This was the shortest-lived zinc isotope whose atomic mass had been accessible experimentally. Below that, calculations predicted zinc-82 to be next. However, for this isotope the mass value was only extrapolated, as it had been inaccessible for a direct mass measurement. Now, an international team of researchers succeeded to perform such an experiment with the Penning-trap mass spectrometer ISOLTRAP at CERN in Geneva.

The short-lived zinc-82 atoms (with a half-life of just a quarter of a second) were produced at the ISOLDE facility by proton bombardment of uranium. This production method, however, also created a large number of unwanted nuclides, drowning the atoms of interest. One of the major challenges was the efficient separation of the zinc-82 ions produced in only minute amounts, from their isobaric contaminants, i.e. from those ions whose nuclei have the same total number of protons and neutrons and, therefore, have a very similar mass. The removal of these particles was a decisive condition for the precision mass measurement that followed. For the isolation of the zinc-82 ions a high-resolution multi-reflection time-of-flight mass separator was employed. It performed this task in only a few hundredth seconds and, thus, saved more than an order of magnitude in time as compared to previously available methods. It allowed, for the first time, the determination of the mass of zinc-82 – with the extreme small uncertainty of just 1part out of 25 million.

The predictions of neutron-star models could now be combined with the new experimental mass value of zinc-82. To this end the composition of the neutron-star crust was re-calculated. Surprisingly, from the revised binding energy of zinc-82 it was deduced that this particular nuclide is no longer found in the crust. Instead, the location of zinc-80 is limited to a deeper level, now followed by nickel-78 further below.

While the existence neutron stars had been predicted already in the 1930’s, their observation turned out to be very difficult. However, some of them send signals in the form of periodic pulses ranging from the radio to the X-ray range. For the discovery of these “pulsars” Antony Hewish received the 1974 Nobel prize in physics. In 1993 another Nobel prize was awarded for the first indirect evidence of gravitational waves via neutron-star observations. Nevertheless, the theoretical description of neutron stars remains incomplete until today, because their extreme conditions cannot be imitated in the laboratory. However, by modeling the stars one can distinguish several “shells” in analogy to the shell structure of the earth. A homogeneous core is surrounded by the (inhomogeneous) inner and outer crusts. In the latter there are still isolated atomic nuclei within an electron gas. In the uppermost layers of just a few ten meters isotopes of the elements iron, nickel and krypton are predicted which are stable also under terrestrial conditions and thus well known. In contrast, the next layers are made of very short-lived nuclides which are only kept at equilibrium by continuously recapturing electrons. The “inner crust” starts at a depth of 300m to 500m, where the atomic nuclei can no longer bind all neutrons and, therefore, are immersed in a “sea” of free neutrons.

Since about a quarter of a century precision mass measurements of short-lived nucleiare performed with the spectrometer ISOLTRAP at CERN. The results are important input parameters for nuclear-structure calculations and tests of fundamental-physics questions. The setup has been improved and extended continuously, repeatedly pioneering techniques for precision mass measurements. The newest component, a multi-reflection time-of-flight mass separator, has been developed at the University of Greifswald. The zinc-82 measurements were performed by further researchers of CERN, the Max-Planck-Institute of Nuclear Physics at Heidelberg, the Helmholtz Center for Heavy Ion Research at Darmstadt, the Japanese research center RIKEN, the Helmholtz-Institute Mainz, as well as from universities at Dresden, Leuven (Belgium) and Orsay (France). The neutron-star calculations were performed at the Université Libre de Bruxelles (Belgium).

<
Structure of a neutron star (top left) and a depth profile of the isotope content of the outer crust ...
Grafik: Robert Wolf Universität Greifswald Photographs and figures can be downloaded free of charge for editorial use in the context of this press release. The author has to be indicated. Download
None

Structure of a neutron star (top left) and a depth profile of the isotope content of the outer crust (right). In bold print the nuclides are indicated whose masses have been determined experimentally. The changes in the crust structure as a consequence of the mass measurement of zinc-82 are indicated in red. Bottom left: Schematic drawing of the main components of the precision mass spectrometer ISOLTRAP as well as a resonance curve from which the mass of the zinc-82 nuclide has been determined. 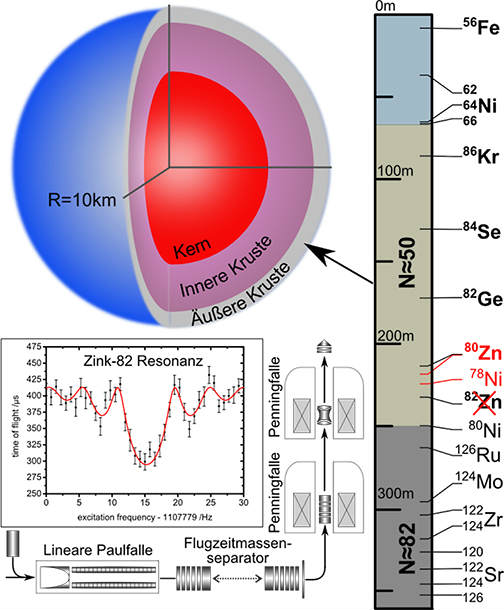