For the first time, scientists have mapped the entire genome of four tapeworm species. Their publication in "Nature" magazine reveals new weak spots of the parasites – they seem to be susceptible to standard cancer drugs.

Tapeworms live in the intestines and absorb nutrients from their hosts without doing any major harm. Their larvae, in contrast, are much more dangerous. They can migrate to the liver, lung, brain or other organs and form cysts in these tissues which can grow to the size of a handball. These cysts can have severe consequences for the infected persons, such as blindness, epilepsy, liver failure and even death.

Professor Klaus Brehm of the University of Würzburg estimates that several hundred million people worldwide are infected by tapeworms – especially in the tropics, and especially in regions where people live closely together with animals under poor hygienic conditions. According to Brehm, no therapy is presently available that reliably kills the dangerous tapeworm larvae.

Against this background, an international research team has now presented fascinating new insights into tapeworms in the top science magazine "Nature". Besides scientists from England and Mexico, a team of the University of Würzburg has been a major contributor to the study: Klaus Brehm and his associates Ferenc Kiss and Uriel Kozial of the Institute for Hygiene and Microbiology.

The researchers have sequenced the genome of fox tapeworm, pork tapeworm, dog tapeworm and dwarf tapeworm for the first time. "The DNA sequences now help us find potential drug targets on which therapies can act", says Dr Matthew Berriman of the Sanger Institute in Hinxton near Cambridge (England). Normally, researchers identify new targets for drugs to combat diseases by comparing a pathogen's genome sequence with the human host's DNA to find differences between them. This time, however, researchers deliberately looked for similarities: They wanted to identify new targets for drugs which have already proved effective in other conditions.

A list of the most promising targets shows: Many are identical to targets on which cancer treatments take effect. The reason: "A tapeworm infection takes a course much like the growth of a tumour", Brehm explains. "The larvae of the fox tapeworm, for instance, metastasise and proliferate in the whole body." Additionally, their development is controlled by the same genes responsible for the growth of a cancer cell. The larvae are therefore probably susceptible to standard cancer treatments.

But the researchers uncovered even more weak spots of the parasites. In the course of evolution, tapeworms have lost the ability to synthesise the necessary fats and cholesterol that are crucial for larvae development. Instead, they scavenge from their hosts. They use proteins to bind the necessary fats. By attacking these proteins with certain drugs, researchers hope to "starve" the larvae.

Tests on cell cultures of tapeworms

But are the identified new targets really weak spots of the tapeworms? This is currently being studied at the University of Würzburg. Klaus Brehm and his team have done pioneering work here to develop methods to cultivate the cells of fox tapeworm in the laboratory. "This enables us to test the potential drugs and select the most effective ones for further studies."

The genome analysis has shown why treatment attempts so far have been unsuccessful. The drug Praziquantel, for instance, which blocks certain calcium channels, had been used to combat the tapeworm larvae. It reliably kills the tapeworm species living in the intestines, but is ineffective against larvae – because said channels hardly exist in the larvae, as has been discovered recently.

Klaus Brehm and his team at the University of Würzburg study other aspects of tapeworms which might be important for medical progress.
"The tapeworm larvae behave like perfect transplants", the Würzburg scientist explains. "They implant themselves in the liver, for example, where they grow over years without the immune system noticing". If scientists knew how this perfect camouflage against the immune system works, major advances could be achieved in organ transplantation. Because transplanted organs are frequently rejected by the recipient's immune system.

Brehm is also fascinated by another characteristic of the parasites: "A tapeworm is theoretically immortal". How is that possible? The tapeworms fertilise themselves in their final host's intestine and their eggs pass into the environment with the host's faeces. The eggs are eaten by the intermediate hosts, transform into larvae and end up in the final host again – an endless cycle. "We want to learn how that works", Brehm says. The genome analysis has already yielded one new finding for the Würzburg scientists: "Tapeworms have a very special stem cell system which we will continue to study now".

<
In this stage, the larva of a fox tapeworm enters the fox that has eaten an infected mouse. In the c ...
(Photo: Klaus Brehm)
None

<
Fox tapeworm kept in the lab: The larval stages are cultivated in the lab. In the liver of the inter ...
(Photo: Klaus Brehm)
None

In this stage, the larva of a fox tapeworm enters the fox that has eaten an infected mouse. In the centre of the globular structure, we can see more clear-cut bends: This is the set of hooks the tapeworm uses to attach to the intestinal wall of the fox. 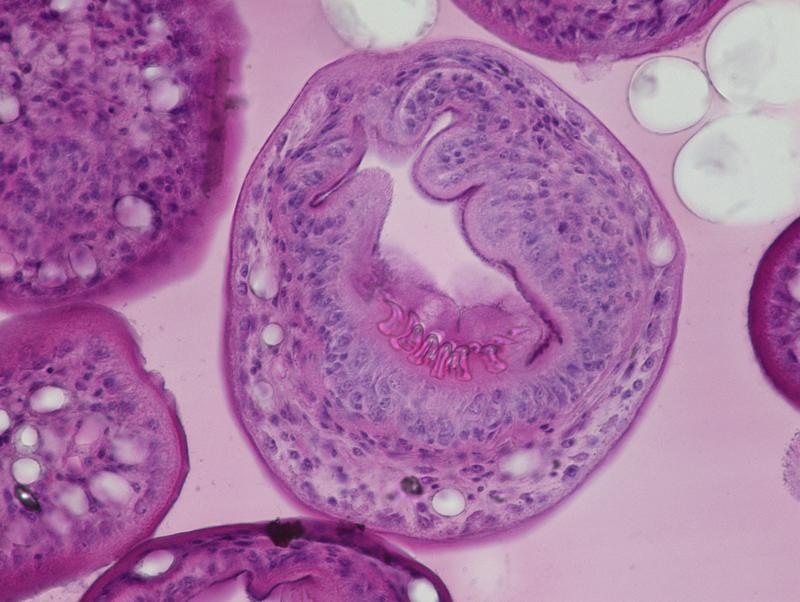 Fox tapeworm kept in the lab: The larval stages are cultivated in the lab. In the liver of the intermediate hosts they grow like a tumor. This system was developed at Würzburg University. It allows testing which drugs kill the parasite, among others. 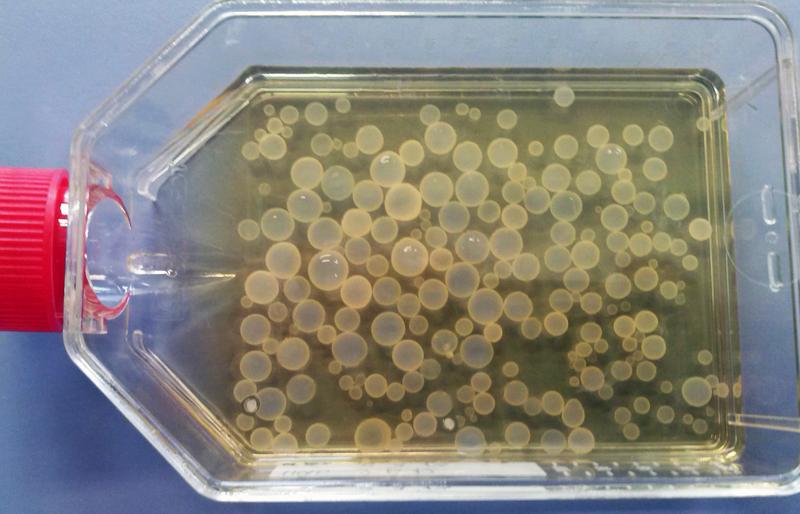