The economist Eric von Hippel is one of the world’s most renowned academic experts in management and innovation research
The Hamburg University of Technology (TUHH) today awarded an honorary doctorate of economics and social science (Dr. rer. pol. h.c.) to Professor Eric von Hippel, PhD, of the Massachusetts Institute of Technology (MIT), Boston, U.S.
The TUHH awarded the degree in recognition of “his trail-blazing contributions to research on user innovation and his untiring endeavors to assist young scientists on their academic career path,” as the citation put it.

The economist Eric von Hippel is one of the world’s most renowned academic experts in management and innovation research
The Hamburg University of Technology (TUHH) today awarded an honorary doctorate of economics and social science (Dr. rer. pol. h.c.) to Professor Eric von Hippel, PhD, of the Massachusetts Institute of Technology (MIT), Boston, U.S.
The TUHH awarded the degree in recognition of “his trail-blazing contributions to research on user innovation and his untiring endeavors to assist young scientists on their academic career path,” as the citation put it.

Prof. Hippel, 71, is one of the world’s most renowned academic experts in management and innovation research. He was education at Harvard, at the Massachusetts Institute of Technology (MIT), and at the Carnegie Mellon University. In 1966 he was awarded a Master of Science in electrical engineering at the MIT. After setting up a successful technology enterprise he opted for an academic career and went on to become Professor of Management at the MIT, where he has taught and undertaken research since 1973, concentrating on user innovation. By means of empirical research he discovered that innovations frequently originate not in manufacturing enterprises but are developed externally by customers or suppliers. Manufacturers eventually take them over, improve them, and produce them in series. An example of consumer innovation is TippEx correction fluid, which was invented by a secretary in the late 1950s.
He paid special attention in his research to the principles and impact of so-called user innovations, or new products, processes, and services that are initiated, developed, and implemented by users. In the 1970s and 1980s the insight that in many industries users make a substantial contribution toward value creation by means of innovation was something totally new for innovation and marketing research.
In 1986 von Hippel developed a theoretical model, his lead user method, by which companies participate their customers in the further development and improvement of products and services. He has lately focused especially on open source software and open source innovation.
His research has exerted a fundamental influence on the understanding of innovation processes. To summarize, it can be said that Eric von Hippel has with his work initiated a separate research area of his own in innovation research, making his mark on it for over three decades. He is an international multiplier and is closely associated with U.S. industry and large European enterprises. He maintains close ties with leading European universities, visits Europe regularly, and is actively integrated in European research programs. He has visited the TUHH on several occasions and in 2010 the Open and User Innovation Conference was held jointly with him on the TUHH campus.
Special mention must be made of his work on behalf of young scientists. He has supervised many scientists as their Doktorvater, or doctoral supervisor, including five PhD students at TUHH in the past five years. Young research scientists have spent time at the MIT as visiting scholars to conduct research with him, and many of them are now professors themselves. They include TUHH professors Cornelius Herstatt and Christian Lüthje. They collaborate closely with Eric von Hippel, as reflected in a number of high-ranking publications.
Scholars who worked for Hippel also include the TUHH academics Prof. Dr. Christopher Lettl (now Vienna University of Economics and Business, previously doctoral student at the TUHH Institute of Technology and Innovation Management), Dr. rer. pol. habil. Christina Raasch (Institute of Technology and Innovation Management), and Dr. rer. pol. Viktor Braun (Institute of Technology and Innovation Management).
The welcome address by TUHH President Professor Garabed Antranikian was followed by a laudatory speech by Professor Dietmar Harhoff of the University of Munich. The honorary degree was officially awarded to von Hippel, who then gave a lecture entitled Framing a New User Innovation Paradigm. After final addresses by Professors Cornelius Herstatt and Christian Lüthje of the TUHH, a program of music was played by a cello duo, Wentrup and Selle, of the Hamburg University of Music and the Dramatic Arts
It is only the sixth honorary doctorate that the TUHH has awarded since it was founded 35 years ago. The other holders are Professor Hansjörg Sinn, Hamburg, Professor Hans-Georg Unger, Braunschweig, Hartmut Mehdorn, Berlin, Eberhard Reuther, Hamburg, and Professor Otto Fiedler (who died on March 27).
Prof. Eric von Hippel comes from a family that has produced many well-known scientists. His father Prof. Arthur R. Hippel held the chair of materials science at the MIT. His mother Dagmar was the daughter of Nobel laureate James Franck. As she was of Jewish extraction the family had to leave Germany in the 1930s. Before it found a new home in Boston, Arthur R. von Hippel worked for several years as a research scientist at the Niels Bohr Institute in Copenhagen. Eric von Hippel has four siblings. His younger brother holds the chair of Public and International Affairs at Princeton’s Woodrow Wilson School, his elder brother was Professor of Molecular Biology at the University of Oregon, Arndt von Hippel was a heart surgeon at Anchorage University Hospital, Alaska. His sister is a writer. 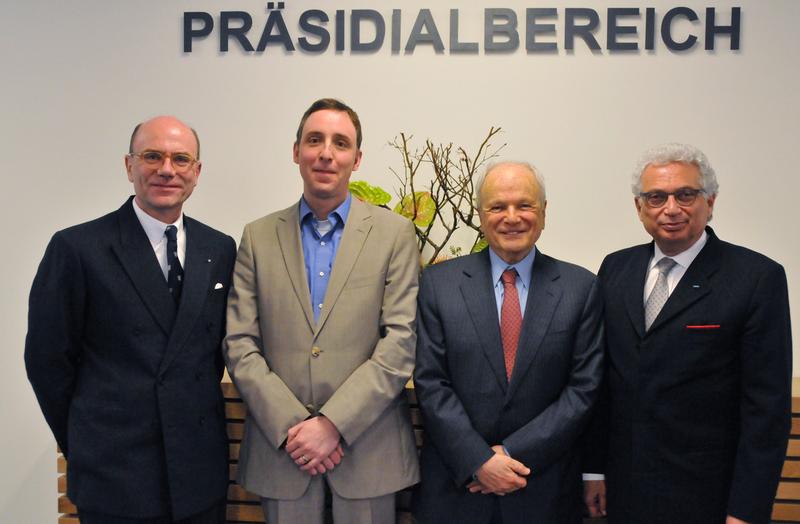