An international team of scientists has succeeded in determining the binding energies of exotic atomic nuclei by use of a multi-reflection time-of-flight mass spectrometer. As reported in the journal Nature, important conclusions about the nature of the forces between the protons and neutrons in nuclei can be drawn by comparing the experimental results and new theoretical values. The difficult measurements were made possible by an extension to the precision experiment ISOLTRAP at the European research centre CERN.

The new component, contributed by physicists from the University of Greifswald, reflects ions back and forth like in a ping pong game. Using this method the team was the first to determine the masses of the artificially produced isotopes calcium-53 and calcium-54. These isotopes play a key role in basic research in nuclear physics. The measurements confirm predictions by theorists from the Technical University of Darmstadt that also account for three-body forces.

From the masses of atomic nuclei one can deduce – via Einstein‘s equation E=mc2 – the energies with which protons and neutrons are bound in the nucleus. Particularly high binding energies are found for nuclei with “magic“ proton and neutron numbers. These special values – 8, 20, 28, 50, 82 und 126 – have been well established for stable nuclei. In the case of exotic systems with short half-lives, however, present knowledge is very limited. In order to improve the description, theoretical physicists from the Technical University of Darmstadt included three-body forces, which are determined by fits to the lightest elements, hydrogen and helium, only. Calculations at the Jülich Supercomputing Centre enabled them to predict the masses of much heavier calcium isotopes. Besides the known neutron shell closures at 20 and 28 the predictions for the masses show that 32 is an additional magic number.

Atomic nuclei, in which there is an extreme imbalance with respect to the numbers of protons and neutrons, are particularly sensitive to subtle components of nuclear forces. However, measuring such nuclei is extraordinarily difficult, because they can only be produced in tiny numbers and decay immediately, within the blink of an eye. Such particles are delivered as ion beams to the precision mass balance ISOLTRAP by the “isotope factory” ISOLDE at the European research centre CERN. However, there is another challenge as the ions of interest are in general generated only together with “contaminations”, i.e. particles of similar masses, so-called isobars. Under these conditions Penning ion traps, up to now the micro scales of choice, reach their limits. Multi-reflection time-of-flight mass spectrometers offer an alternative. Such an instrument was provided by the team from the University of Greifswald and installed as part of the ISOLTRAP setup. After a recent application as a high-resolution mass separator for Penning-trap investigations (see idw press release “Laboratory Mass Measurement deepens Insight into Neutron Star Crusts“ http://idw-online.de/en/news516628) the new device was successfully used to obtain the first mass measurements of calcium-53 and calcium-54.

The principle of time-of-flight mass spectrometry is rather simple: All ions experience the same force and are therefore accelerated to different velocities corresponding to their masses. Thus, after crossing a drift section they reach a detector one after the other – the light ones first and the heavier later. The result is a time-of-flight mass spectrum. Typical drift sections have a length of about a meter. But there is a trick: By use of an “ion mirror” the particles can be reflected and if a second mirror is added drift sections of several kilometres in length can be folded to table-top dimensions. The ion ping pong of reflecting the particles several thousand times back and forth lasts only a few milliseconds. The procedure is much faster than the Penning-trap experiments and, in addition, needs fewer ions. This was the breakthrough, which allowed the confirmation of the predictions for the exotic calcium isotopes of the Darmstadt theory group. The successful application of the instrument from Greifswald establishes multi-reflection time-of-flight mass spectrometry as a next generation technology for the investigation of atomic nuclei.

The ion-trap setup ISOLTRAP was operated by researchers from CERN, the Max Planck Institute for
Nuclear Physics at Heidelberg, the GSI Helmholtz Centre for Heavy Ion Research at Darmstadt as
well as from universities at Dresden, Greifswald, Istanbul (Turkey), Leuven (Belgium) and Orsay (France). 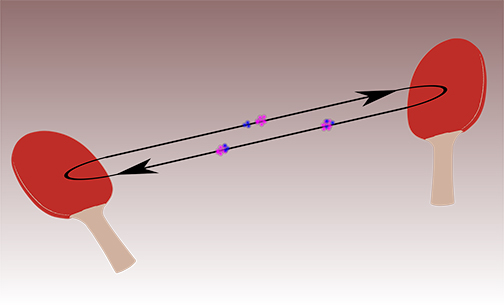 : Schematic Overview of the new ISOLTRAP component for multi-reflection time-of-flight mass spectrometry. The ions are reflected back and forth between the “mirrors” whereby the different ion species are separated. www.uni-greifswald.de/informieren/pressestelle/pressefotos/pressefotos-2013/pressefotos-juni-2013.html 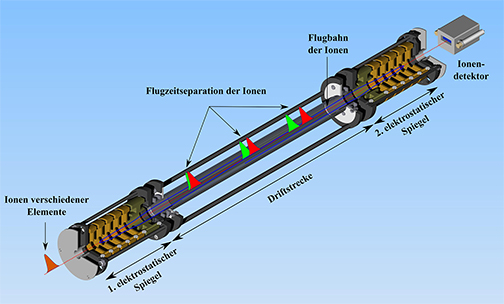