Zoology and botany hand in hand

Research on plants and animals is still done isolated from each other. A new reference book presents results of recent research dealing with polyploidy, which is a special subject of evolution and genetics. For the first time animal and vegetable examples are compared with each other.

The brilliant “Father of evolutionary theory” Charles Darwin discovered his findings without knowing about genetics at all. His analysis is based on precise observation and description of wildlife. When the priest Gregor Mendel lighted on the systematics of heredity in the garden of the Augustinian abbey in Brno at the same time, he limited his investigations to plants. His findings had far-reaching consequences for science and brought him the most justified nickname “Father of genetics”. But it was only after the verification of his work by animal examples, like his studies on the heredity of sea urchin eggs, that his research was widely accepted in the academic world. In the times of the “Modern synthesis” by J. Huxley in 1942 Mendel’s and Darwin’s visions were merged after many years. Nowadays research of plants and animals is still handled quite separately. A new reference book presents recent research of the special field of evolutionary research and genetics and compares animal and plant examples.

Fast way to new species
One aspect of genetic research deals with polyploid organisms which have more than the usual two chromosome sets in their cells. Polyploidy often results from the fusion of the genetic material of two species (hybridization) or the duplication of the own genome. “Although it might determine dramatic problems polyploidy can lead to complete new species very quickly which do not reproduce with their parents at all or only very limited,” says Dunja Lamatsch from the Research Institute for Limnology of the University of Innsbruck in Mondsee (Austria), one of the editors of the new book. “Especially the combination of the genome increases the variety of genotypes and offers a bunch of new possibilities to evolution: creatures with completely new (“transgressive”) characteristics may arise which do not appear in any principal form; new habitats can be populated.”

Manifold examples for polyploidy
A key point of polyploidy research is focused on the world of plants as polyploidy has played a role in the evolution of 70% of all species. The number of polyploid agricultural crop (e.g. cotton, wheat) is large since some polyploidy plants develop notably large organs (leaves, stem, root, fruits) and moreover show increased vitality and adaptability. This made research in agricultural practice most profitable. Nevertheless also animals show very interesting polyploidy phenomenons, e.g. those which reproduce as natural clones or hybrids of three species.

New reference book in polyploidy
It is no coincidence that the editors of the reference book are situated at limnological research institutes in Germany and Austria: In vertebrates it is most common that fish and amphibians are polyploid. The book “Trends in Polyploidy Research in Animals and Plants” by Matthias Stöck from Leibniz Institute of Freshwater Ecology and Inland Fisheries and Dunja Lamatsch which was recently published by Karger is a milestone in polyploidy. After 30 years eight topics comparing current examples from animals and plants are collated and discussed. Numerous reputable authors from twelve countries contributed to this book.

<
Trends in Polyploidy Research in Animals and Plants.
Karger Verlag
None

Trends in Polyploidy Research in Animals and Plants. 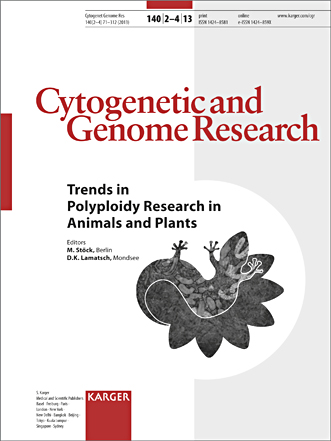