Gelnhausen/Frankfurt am Main, den 25.02.2014. A genetic study of brown bears in Bulgarian mountain regions provided evidence for the existence of individuals of Carpathian origin. How did they get there? Natural dispersal is unlikely. Rather, the bears were brought in by air transport. Along with cooperation partners of Bulgarian and Romanian NGOs and the Frankfurt Zoological Society Scientists of the Senckenberg Conservation Genetics Section in Frankfurt, Germany have confirmed the legend that the former leader of the Romanian Communist Party, Nicolae Ceausescu once sent the bears to Bulgaria. The study has now been published in the journal Conservation Genetics.

The brown bear (Ursus arctos) is considered an endangered species across Europe. While the species is largely extinct in the western part of the continent, larger populations have persisted in the eastern part, including Russia, the Carpathians and the Balkan Peninsula. “Unfortunately, we lack considerable knowledge about these few remaining viable bear populations, including basic data such as population size and connectivity“, says Dr. Carsten Nowak, wildlife geneticist at Senckenberg. In order to change this unsatisfying situation, leading bear experts from the Balkani Research Society sampled more than 200 scat, hair and tissue samples of the species across Bulgarian bear habitats.
Individual DNA profiles generated at the DNA laboratories of Senckenberg and the LOEWE Biodiversity and Climate Research Centre in Frankfurt (BiK-F) finally provided hard data on the population status in the country. During the analysis, however, PhD student Christiane Frosch revealed an unusual pattern: several individual profiles collected in three regions in the main mountain regions of the country, the Stara Planina Mountains and the Rhodopes, differed considerably from all the other bear profiles. Where did these bears come from and how did they get there?

The scientists finally found the place of origin of these „scientific problem bears“: Samples from the Carpathian mountains in Romania provided from bear conservationists of the local Milvus Group perfectly matched the unusual Bulgarian DNA profiles.These regions, however, lie several hundred kilometers apart from each other and the generally high genetic difference between the populations does not suggest high rates of exchange. Although bears are good long-distance dispersers and could theoretically make it from Romania to Bulgaria by themselves, the scientists were skeptic. „We cannot exclude the possibility of natural migration, but geographic locations of the revealed samples and several other patterns make this scenario unlikely“, says Nowak.

Intensive investigation and regional study finally brought a more reasonable explanation: during the era of socialism some Eastern European heads of government were passionate bear hunters. It is reported that the Romanian dictator, Nicolae Ceausescu (1918-1989), shot more than 1000 bears in his lifetime. The constant success of his bear hunting activities was guaranteed by numerous assistant hunters and game wardens, and by activities that targeted the boosting of the Romanian bear population, including raising bears in captivity.
Some of these bears were used for improving relationships with allied rulers. In Romania and Bulgaria people report that the large Carpathian bears were brought to Bulgarian enclosures be military planes and released in order to spice up the less impressive local bear population. Indeed, at least one of the places where translocated bears where kept, the Kormisosh enclosure in the Rhodopes, does still exist (see photo), as local investigations revealed. Indeed, several of the “alien” bear genotypes were found in the vicinity of this enclosure.
More than two decades after the breakdown of socialism in Eastern Europe researchers from Germany, Bulgaria and Romania confirm a curious legend: aerial dispersal is not restricted to plants, insects, spiders, or birds. Occasionally, this might also involve bears, the heaviest land predators on earth.
It should be noted that despite of intensive investigation, the researchers found no written documents about the case. Their study, now online in the journal “Conservation Genetics” is the first written document to certify it. 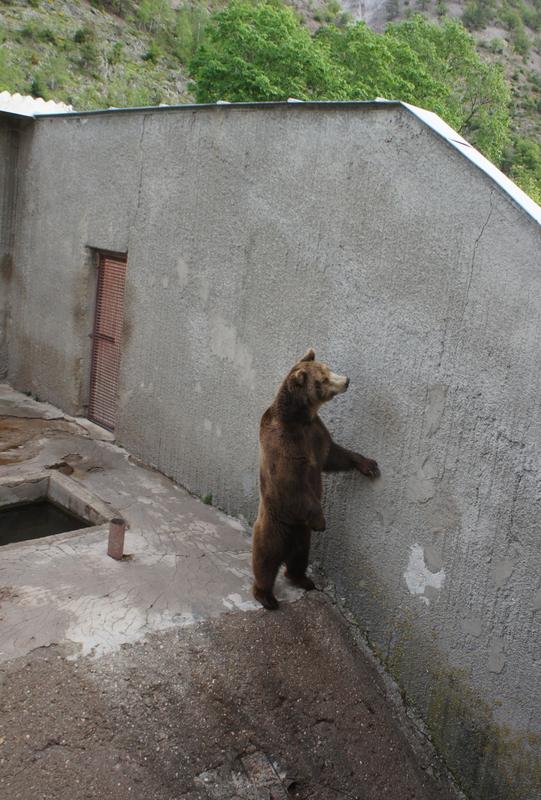 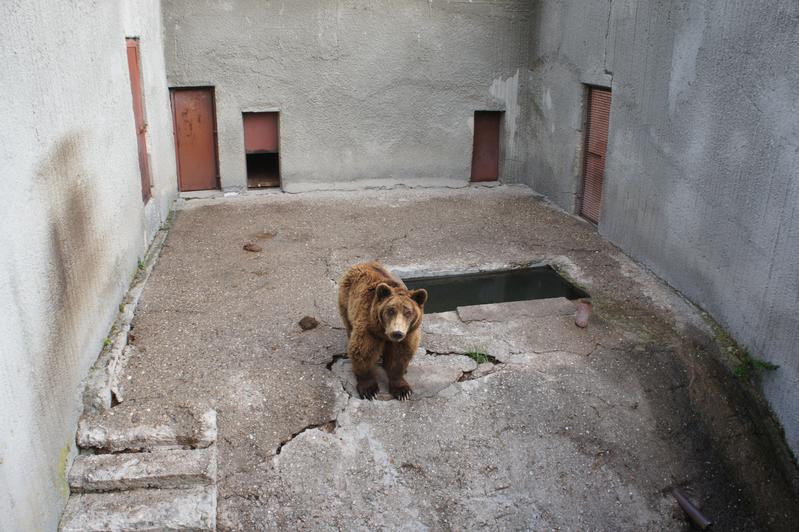