Speed at its limits
Advanced Search ?

Speed at its limits

One thousand billion operations per second – this peak value is achieved by semiconductor nano-lasers developed by physicists at the University of Jena together with their colleagues from Imperial College London. As the researcher report in the current issue of the journal of „Nature Physics“, they are capable of producing the fastest lasers to date (DOI: 10.1038/NPHYS3103).

The fastest, in this case means the speed at which the laser can be turned on and off and not the length of laser pulse, as Prof. Dr. Carsten Ronning from the University of Jena clarifies. “While the fastest lasers typically need several nanoseconds for one cycle our semiconductor nano-laser only needs less than a picosecond and is therefore a thousand times faster,“ the solid state physicist continues.

For their nano lasers the researchers use tiny wires made of zinc oxide. These wires have diameters of a few hundreds of nanometres – around a thousandth of the diameter of human hair - and are about a few micro meters long. Their properties make these nanowires an active laser medium and a resonator at the same time. “Light is being reflected at the ends of the nanowire, similar to a mirror, and is then amplified while propagating through the nanowire,“ says Robert Röder. The PhD student in Prof. Ronning’s team is one of the authors on this current publication.

For the researchers the concept of using nanowires as a laser is not new. However, the new idea in this publication is the possibility to fundamentally modify the speed of these lasers. To this end the physicists combined the semiconductor with a metallic layer, leaving only a 10 nanometer thin gap layer between both in which the light field is constricted. “This is how light-matter interactions are accelerated,“ says Robert Röder. This is not only “world record“ regarding the switching speed. “Most likely we also achieved the maximum possible speed, at which such a semiconductor laser can be operated“. Applications for these ultrafast und nanometre small lasers are especially optical transistors and sensors. “Using such tiny sensors single molecules or microbes can be detected in medical diagnostics“, emphasizes Prof. Ronning.

<
PhD student Robert Röder from the University of Jena achieved together with colleagues from Imperial ...
Photo: Jan-Peter Kasper/FSU

PhD student Robert Röder from the University of Jena achieved together with colleagues from Imperial College London the maximum possible speed at which a semiconductor laser can be operated. 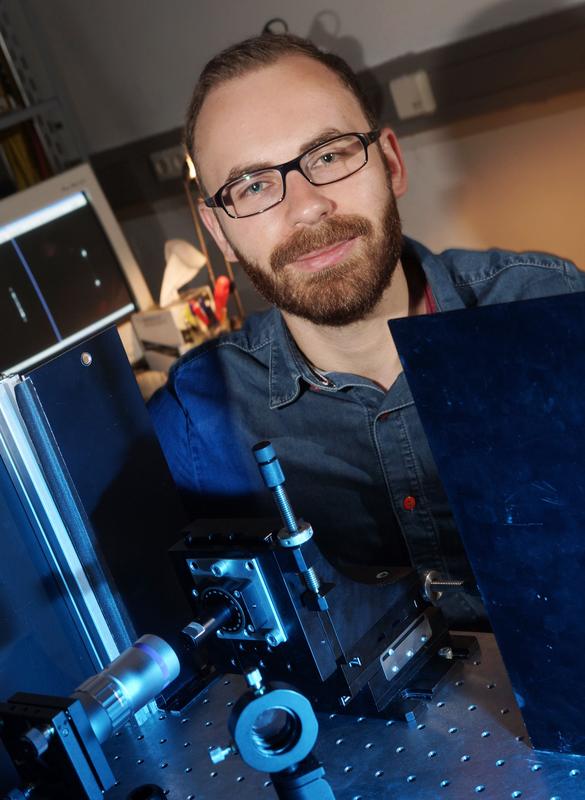