Researchers from Würzburg and Stony Brook have found a new weak spot in the bacterium that causes tuberculosis: Blocking a specific enzyme involved in the cholesterol catabolism could disable the bacteria.

In 2012, there were around 8.6 million cases of tuberculosis worldwide resulting in 1.3 million associated deaths according to the World Health Organisation WHO. About five percent of infections were caused by multidrug-resistant pathogens, a trend that is on the rise.

Scientists are therefore seeking new effective ways to tackle the tuberculosis bacteria in the future. Professor Caroline Kisker and her team have devoted their research to this topic: At the University of Würzburg’s Rudolf-Virchow-Center for Experimental Biomedicine, they are studying the bacterial enzymes to pinpoint new vulnerable points.

The Würzburg researchers are looking into the pathogens' cholesterol metabolism among others. The enzyme FadA5 is of major interest in this context as it is needed by the bacillus to keep up chronic infection. Teaming up with researchers of Stony Brook University (US), Kisker and her team have now analysed the exact structure of the enzyme – and identified a potential new target for drugs.

"We inserted a steroid molecule into the enzyme's active centre and analysed the resulting structure," the Würzburg professor explains. This finding helps to design molecules that fit exactly into the active centre and block it with the aim to completely disable the enzyme FadA5, as the research group reports in the January issue of "Structure" journal.

A potential problem, however, is that the human organism uses enzymes which are similar to the FadA5 from the tuberculosis bacilli. Hence, it is conceivable that a new drug not only affects the bacteria, but harms the human body as well.

Therefore, Kisker's team analysed the human enzymes, too. The result was promising: "Comparing the structures showed that it should be possible to block the bacterial enzyme specifically," the professor further. Thus, an inhibiting drug should only harm the bacteria but not the human enzymes.

"The steroid is a solid basis for us to develop new inhibiting drugs," Kisker says. To pursue this goal, she has teamed up with other work groups, including that of Professor Christoph Sotriffer of the Würzburg Pharmaceutical Chemistry Department. Their aim is to find a drug that specifically inhibits the FadA5 enzyme of the tuberculosis pathogens.

<
Interaction of the steroid (yellow) with the FadA5 enzyme of the tuberculosis bacillus. The steroid ...
(Image: Caroline Kisker)
None

Interaction of the steroid (yellow) with the FadA5 enzyme of the tuberculosis bacillus. The steroid is a good basis for developing a new inhibiting drug. 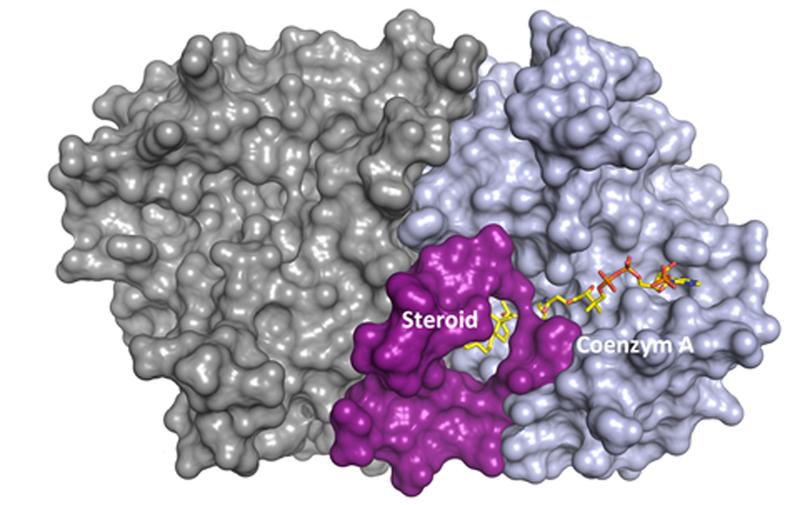