A "GPS" for molecules

In everyday life, the global positioning system (GPS) can be employed to reliably determine the momentary location of one en route to the desired destination. Scientists from the Institute of Physical and Theoretical Chemistry of the University of Bonn have now developed a molecular "GPS" with which the whereabouts of metal ions in enzymes can be reliably determined. Such ions play important roles in all corners of metabolism and synthesis for biological products. The "molecular GPS" is now being featured in the journal "Angewandte Chemie" .

There would be no life on our planet without enzymes. These molecules, control and enable biochemical reactions ranging from digestion to the duplication of genetic information. "Enzymes are spatially complex structures which can have multiple folds, sheets and loops", says Prof. Dr. Olav Schiemann from the Institute for Physical and Theoretical Chemistry of the University of Bonn. In the reaction center of such a "protein knot", which is known as the "active center", is often one or more metal ions. This means that the substance which is to be changed by a chemical reaction attaches to or close to the metal ion. The ion facilitates the breakage or reformation of one or more bonds in the attached substance and the conversion into a new substance arises through the enzyme. Such conversions take place constantly in our stomach, for example, where food is broken down into substances which our body can easily absorb.

Scientists are examining how such essential enzymes work. To do this, they must precisely know how the individual atoms are arranged in these biomolecules. "When we know the whereabouts of the metal ion in an enzyme, we can better understand exactly how the reactions proceed," says Prof. Schiemann. His working group has now determined the position of the active center in an enzyme using a novel method which is reminiscent in principle of the global positioning system (GPS) with which automobile navigation systems work.

"The structure of enzymes is frequently, at first glance, just as confusing as the maze of traffic during rush hour," chuckles the physical chemist from the University of Bonn. Similarly to how an individual car is nearly impossible to make out in a large amount of traffic, the metal ion "hides" in the numerous coils and folds of the enzyme. Nonetheless, the position of the vehicle - and also that of the metal ion - can be reliably determined with GPS. Several satellites orbit our planet and indicate through the transit time of signals the distance to a certain point on the earth, for example, a car. The site where the distance spheres of the various satellites intersect is where the car to be located.

The "satellites" consist of the spin labeled amino acid cysteine

The physical chemists from the University of Bonn proceeded similarly. "Our satellites are spin labels," explains doctoral student Dinar Abdullin. These are small organic molecules which have an unpaired electron and which are stable. The researchers distributed six of these "molecular satellites" in their enzyme model "azurine" - a blue protein with a copper ion in the center. Using computer programs, the scientists first tracked the "orbits" of the tiny satellites in the coils of the enzyme. They then determined the distance between the satellites and the metal ion using a spectroscopic method, namely PELDOR, which acts like a ruler on a molecular level. "Similar to the GPS, we were able to precisely determine the position of the active center in the enzyme from this," says Abdullin.

The tool kit of physical chemistry has now gained an elegant additional method. "We developed the method for basic research but it can also be used to clarify the structure of other enzymes," says Prof. Schiemann. A better understanding of substance conversions at active centers is ultimately also the foundation, for example, for industrial drug manufacturing.

A GPS for molecules: Prof. Dr. Olav Schiemann (left) and doctoral student Dinar Abdullin with an image of the enzyme azurine. 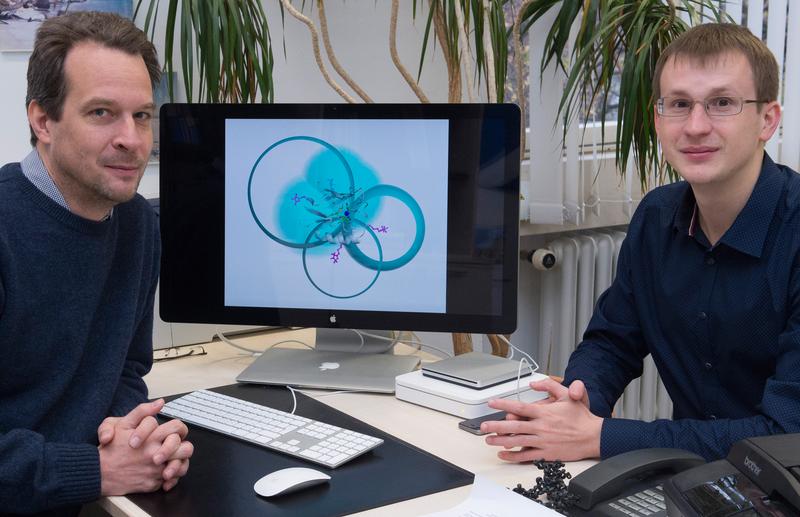