Microplastics in the ocean: biologists study effects on marine animals

Ingestion of microplastic particles does not mechanically affect marine isopods. This was the result of a study by biologists at the North Sea Office of the Alfred Wegener Institute, Helmholtz Centre for Polar and Marine Research (AWI) that was published recently in the journal “Environmental Science and Technology”.

The study marks the launch of a series of investigations aimed at forming a risk matrix on the sensitivity of different marine species to microplastic pollution.

Uptake of large plastic items by birds and fish may cause blockage of the gastrointestinal tract and severe starvation of the animals. “We were wondering whether small plastic particles have a comparable effect on smaller animals,” says Dr. Lars Gutow from AWI’s North Sea Office. “Only very limited research has been done on the effects of microplastics on living beings. Accordingly, there is great uncertainty about the implications for marine animals,” the biologist explains the motivation for the study.

Lars Gutow and his colleagues selected the isopod Idotea emarginata as their model organism for an initial case study. In feeding experiments the researchers offered the isopods artificial algal food supplemented with plastic particles. The food contained three different kinds of microplastics in varying concentrations. They used industrially produced polystyrene particles with a diameter of ten micrometers as well as self-made fragments and fibres made of polyethylene and polyacryl, respectively.

The researchers studied the fate of the different materials under a light microscope, with the help of a fluorescence microscope, and with an electron microscope. They were able to trace the path of the microplastic particles through the isopods and determine the concentrations of the particles in different sections of the digestive system. The study showed that the concentration of microplastics in the faecal material of the isopods was as high as in the food. The scientists found small amounts of microplastics both in the stomach and in the gut of the animals. However, they did not detect any microparticles in the digestive glands. “The isopods ingested and excreted the artificial food with the microplastic particles without absorbing or accumulating the particles,” Gutow summarises the results. Thus, plastic particles in the specific size range studied do not represent a direct mechanical risk for isopods and probably not for other crustaceans either. “In the case of Idotea emarginata, the microplastic particles did not enter the digestive gland, which is the principle organ in crustaceans where digestion and resorption of nutrients takes place,” states the biologist from AWI’s North Sea Office.

In a long-term experiment the scientists could also show that isopods did not display any long-term effects even after feeding on microplastic enriched food for six to seven weeks. Fitness parameters such as survival rate and growth did not differ between animals that were fed with and without microplastics, respectively. In an earlier study, however, AWI biologist Prof. Dr. Angela Köhler demonstrated that mussels show inflammatory reactions if they take up and absorb high concentrations of microplastic in an experiment. This clearly shows that different animal species react differently to microplastics. “In contrast to filter feeding mussels, isopods of the genus Idotea probably take up more frequently indigestible particles with their food in their natural habitat and may, thus, have adapted accordingly,” elucidates Gutow.

But the biologists are not only interested in the feeding type: “We want to study systematically how the life style, habitat, physiology and anatomy of different marine organisms influence the uptake and utilisation of microplastic particles in order to come up with a risk matrix for diverse types of organisms,” says Lars Gutow. “Therefore, it will be necessary to also study the possible chemical (toxic) and biochemical effects in addition to the physical effects that we looked at,” he outlines future tasks.

Printable images can be downloaded from http://www.awi.de/index.php?id=7328.

Follow the Alfred Wegener Institute on Twitter and Facebook. In this way you will receive all current news as well as information on brief everyday stories about life at the institute.

The Alfred Wegener Institute conducts research in the Arctic, Antarctic and in the high and mid-latitude oceans. The Institute coordinates German polar research and provides important infrastructure such as the research icebreaker Polarstern and research stations in the Arctic and Antarctic to the national and international scientific world. The Alfred Wegener Institute is one of the 18 research centres of the Helmholtz Association, the largest scientific organisation in Germany.

Fluorescence image: Transversal slice through the gut of Idotea emarginata with a microplastic particle (centre) and the midgut gland tubules void of microplastics. 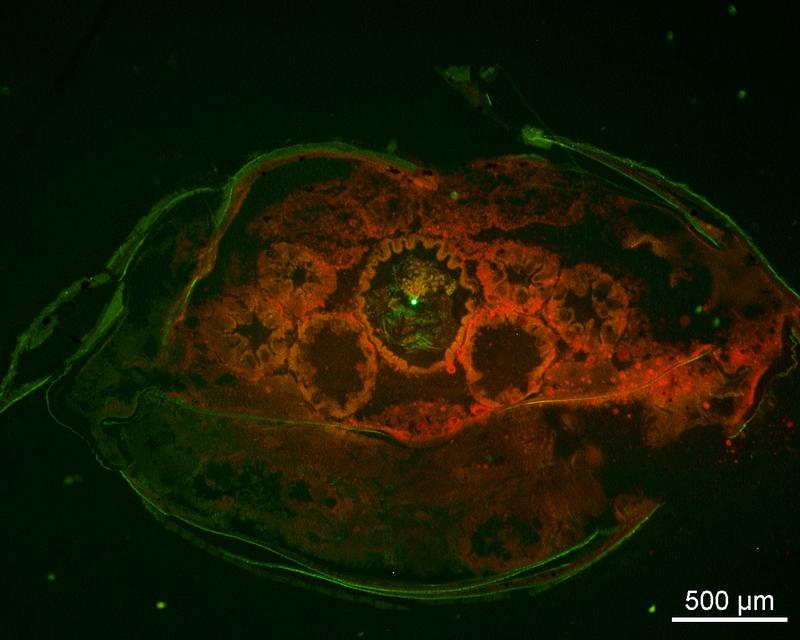