An international team of scientists succeeded for the first time to determine the binding energies of the atomic nuclei of the exotic potassium isotopes 52K und 53K by mass spectrometry. The measurements at the European research center CERN were performed with a time-of-flight spectrometer built at the University of Greifswald. The new findings complement results reported two years ago about the corresponding calcium isotopes. They confirm the previously found new magic neutron number N=32. The experimental results as well as accompanying theoretical calculations are published in the international research journal Physical Review Letters in its latest issue (22. May 2015).

All atoms consist of electron shells and nuclei made up of protons and neutrons. The number of protons defines the chemical properties of the corresponding element, whereas the number of neutron determines the isotope. Only few of the known atomic nuclei are stable whereas most of the nuclei disintegrate by radioactive decay. But stability is a relative property. A measure of the stability of atomic nuclei is the binding energy of the protons and neutrons. These constituents of the nucleus, similar to the electrons further out, are found within certain (nuclear) shells. Nuclei with closed shells, such as in the case of stable calcium, tin or lead with proton numbers 20, 50 and 82, respectively, have relatively high binding energies or in other words: The energy necessary to remove a proton is significantly higher than that found for its „neighbors “, that have only a single or a few further protons in the next shell. The same applies to the neutrons.

In the context of these special shell-stabilized nuclei the proton and neutron numbers are called „magic“. In the region of stable and long-lived nuclei the magic numbers, namely 8, 20, 28, 50, 82 and 126, have been known for decades. Recently, however, it has become apparent that these relative stabilities – and, thus, the magic numbers – change the more, the further one pushes forward into the region of exotic nuclei. The latter are the short-lived nuclei, i.e. those that decay already within hours, minutes, seconds, or even just fractions of that.

Two years ago a new neutron-shell closure was established by way of precision mass measurements with the ISOLTRAP spectrometer at CERN. The ISOLTRAP team includes scientists from CERN, from the Max-Planck-Institute of Nuclear Physics at Heidelberg, from the GSI Helmholtz Centre for Heavy Ion Research at Darmstadt, from the Helmholtz Institute Mainz as well as from Universities at Dresden, Greifswald, Istanbul (Turkey), Leuven (Belgium) und Orsay (France). Back then the masses and, thus, the binding energies of the exotic calcium isotopes with 33 and 34 neutrons were studied. These isotopes, it was found, have particularly small neutron separation energies, i.e., the energy needed to detach one and two neutrons, respectively, is very small when compared with that for the calcium isotope with 32 neutrons. This finding set the basis of the neutron number N=32 as a magic number for exotic calcium nuclei.

However, there still remained the question whether this was just an isolated case or whether it was a more general systematic behavior, i.e. whether this neutron-shell closure would be found in other elements as well. After all, calcium is a special element, as it has already a magic proton number, namely Z=20. Therefore, the ISOLTRAP team now performed follow-up studies and extended the investigations from calcium to its neighbor element potassium. The potassium atoms have one proton less, that is Z=19. Again, the nuclei with N=33 und 34 neutrons had to be probed. However, now the neutron-to-proton ratio was even larger than in the case of calcium. This ratio is another measure of how exotic the nuclei are. The half-lives of the calcium isotopes already had been as low as one half and one tenth of a second, but now for the potassium nuclei the corresponding values were reduced to one tenth and even just one thirtieth of a second. And additionally it was much harder to produce these particles by nuclear reactions in sufficient numbers for the subsequent mass measurements.

However, neither the short half-lives nor the low numbers of particles did prevent the ISOLTRAP team from performing the precision measurements with the „multi-reflection time-of-flight mass spectrometer“ that had been contributed by the researchers from Greifswald. The basic idea of this instrument, the method of time-of-flight mass spectrometry, can be explained in a few words: All ions experience the same force but due to their different masses they are accelerated more or less, in analogy to the high acceleration of a light-weight sports car as compared to a heavy truck, even if both their motors produce the same power. The different accelerations lead to corresponding velocities in a drift region, and the particles arrive at the detector one after the other depending on their masses – the low-weight ones first and the heavy ones later: Thus, a mass spectrum is produced. In most time-of-flight mass spectrometers the drift region is limited to about a meter. At the ISOLTRAP spectrometer, however, a trick is used: The particles under investigation are reflected back and forth several hundred up to thousands of times between two „ion mirrors“. In this way, kilometer-long drift regions can be realized in an apparatus of a length of just one meter. And this „ion pingpong“ takes just a few milliseconds – another advantage compared to alternative methods of mass spectrometry. (see also: press release „Ion ping pong reveals forces in atomic nuclei“ http://idw-online.de/en/news539611)

The ISOLTRAP experiments have been accompanied by theoretical investigations on the potassium nuclei of colleagues in the UK, Canada and France. These studies, too, confronted new challenges in comparison to the case of calcium two years ago, in particular because of potassium’s even number of protons. The new calculation methods applied, based on so-called Gorkov-Green functions, lead to good agreement with the measured values.

The present experiments have not yet exhausted the possible investigations of the magic neutron number N=32. There is still quite some way to go. In particular, there is growing interest in looking at scandium and the next neighbor elements. In addition, reports can be expected of new magic numbers at other regions of the chart of nuclides.

Figure 1: Schematic overview of the multi-reflection time-of-flight mass spectrometer; indicated is a pulse of three different ion species coming from the left; after several turns back and forth between the ion mirrors the species separate (indicated by the yellow, green and red pulses), before their arrival times at an ion detector (on the right) is measured.
Figure 2: „Ion pingpong“.
Figure 1 and 2: Frank Wienholtz

Photo: Marco Rosenbusch at a similar multi-reflection time-of flight mass spectrometer at the Institute of Physics of the University of Greifs-wald - Photo: Dr. Birgit Schabinger

The photograph and figures can be downloaded and used free of charge in connection with this press release. The name of the authors or the photographer has to be mentioned.

<
Marco Rosenbusch at a similar multi-reflection time-of flight mass spectrometer at the Institute of ...
Photo: Dr. Birgit Schabinger
None 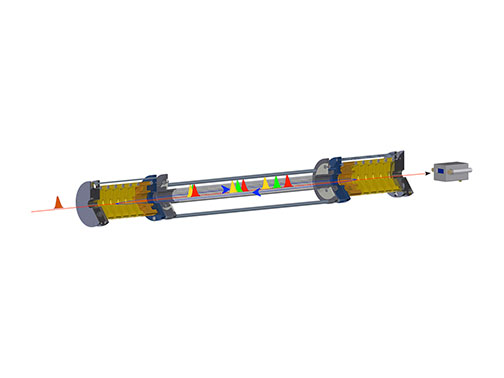 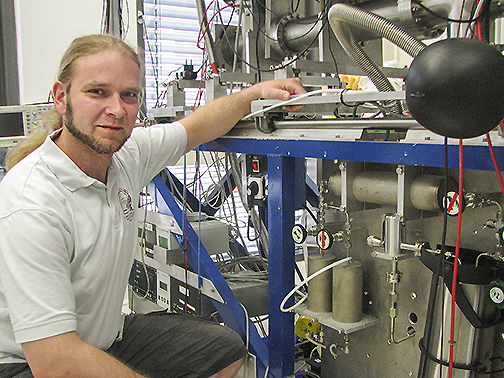