How heavy are neutrinos? To find out, radioactive decays are studied in which they are emitted. An essential ingredient is the decay energy which corresponds to the mass difference between the mother and daughter nuclei. It must be known with highest precision. A team of scientists now succeeded to resolve a severe discrepancy of the decay energy for the artificial holmium (Ho) isotope with mass number 163. It decays by electron capture to the stable dysprosium-163 (¹⁶³Dy) and appears well suited to measure the neutrino mass. The team prepared pure samples of ¹⁶³Ho and ¹⁶³Dy and directly measured their mass difference with high accuracy using the Penning-trap mass spectrometer SHIPTRAP.

Neutrinos are everywhere. Hundred trillion neutrinos are traversing every human per second, but one of their fundamental properties, the mass, is still unknown. While the standard model of particle physics predicts neutrinos to be massless, observations proof that neutrinos must have a tiny mass. By studying neutrino masses, scientists thus explore physics beyond this otherwise so successful model. So far, only upper limits of the neutrino mass could be determined, confirming it to be tiny. This makes a direct mass measurement a challenging task, but spectroscopy of radioactive beta decay or electron capture in suitable nuclei is among the most promising approaches. All radiation emitted in the radioactive decay can be precisely measured, with the exception of the fleeting neutrino, which escapes detection. The neutrino mass is thus deduced from comparing the sum of all detectable radiation to that available for the decay.

An artificial isotope of holmium, with mass number 163, is in the focus of several large collaborations aiming at extracting the neutrino mass from measurements of the energy emitted in the electron capture decay of ¹⁶³Ho to the stable ¹⁶³Dy. Currently in the lead is the ECHo collaboration, centred at the University of Heidelberg, Germany. The sensitivity that can be reached in this experiment relies on a precise value of the ¹⁶³Ho decay energy. Thus, prior clarification concerning the various values reported for the ¹⁶³Ho decay energy is mandatory. Values that span the quite large range from about 2400 to 2900 eV were published over the past decades from indirect measurements performed using different methods. The value recommended in data tables is on the lower end of this band, but the more recent results are some 100 eV higher than this recommended value casting doubt on its validity.

To solve this puzzle, a German-Russian-Swiss-French team of physicists, chemists, and engineers combined their expertise and unique instrumentation. While natural dysprosium contains sufficient amounts of ¹⁶³Dy, samples of ¹⁶³Ho, which does not occur in nature, first had to be prepared from natural erbium enriched in ¹⁶²Er by intense neutron irradiation in the high-flux research reactor at the Institut LaueLangevin at Grenoble, France. Sample purification and processing was done at Paul Scherrer Institute Villigen, Switzerland and Johannes Gutenberg University Mainz. The atomic mass difference of ¹⁶³Ho and ¹⁶³Dy was directly measured using the SHIPTRAP Penning-trap mass spectrometer at the GSI Helmholtzzentrum für Schwerionenforschung in Darmstadt, Germany. Based on the equivalence of mass and energy according to Einstein’s famous equation E = mc², the mass difference translates into the energy available for the decay.

“To determine the masses of holmium and dysprosium, we measured the frequencies of their ion's circular motion in the strong magnetic field of the ion trap, using the novel phase-imaging ion-cyclotron-resonance technique, which allows measurements with highest precision”, explains lead scientist Sergey Eliseev from the Max-Planck-Institut für Kernphysik (MPIK) in Heidelberg, “This circular motion is projected onto a position-sensitive detector in a way, that even small mass differences can be determined much faster and more precisely compared to previous methods.” ¹⁶³Ho and ¹⁶³Dy were measured alternately in intervals of 5 minutes for several days.

An averaging procedure resulted in a final value of the decay energy of 2833 eV with an uncertainty of only a few tens of eV. This confirms the recent results, settles the long-standing discrepancy and thus provides confidence to the approach proposed by the ECHo collaboration. “For the statistics expected in the first phase of the ECHo experiment called ECHo-1k, recently funded by the DFG with a Research Unit, we will reach a sensitivity below 10 eV for the neutrino mass, which is more than a factor of ten below the current upper limit”, says the ECHo spokesperson Loredana Gastaldo from the University of Heidelberg. “Future mass measurements using the new PENTATRAP device will improve the accuracy of the decay energy value by an order of magnitude. This will pave the way to reach sub-eV sensitivity for the neutrino mass”, adds Klaus Blaum, director at the MPIK.

<
Photo of the SHIPTRAP setup at GSI Darmstadt, Germany.
photo: GSI
None

<
The new result (red) confirms the recent results for the decay energy of ¹⁶³Ho. The various symbols ...
graphics: MPIK
None

Photo of the SHIPTRAP setup at GSI Darmstadt, Germany. 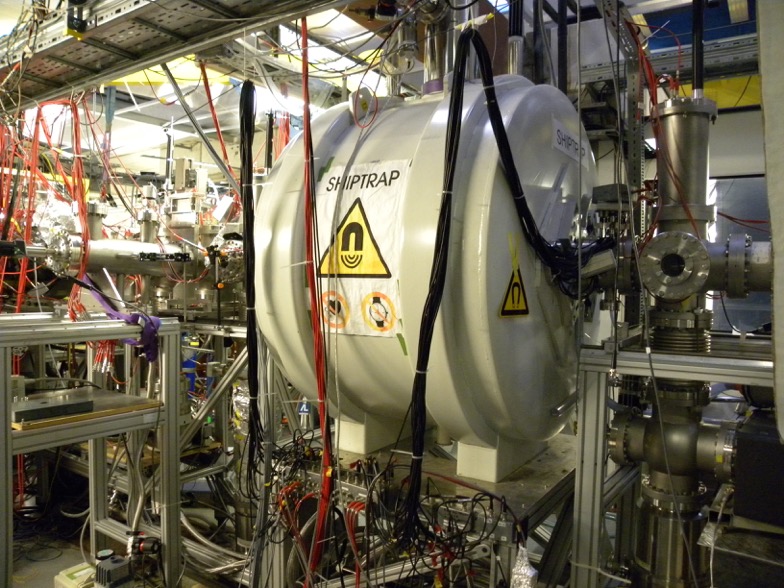 The new result (red) confirms the recent results for the decay energy of ¹⁶³Ho. The various symbols stand for different measurement techniques. 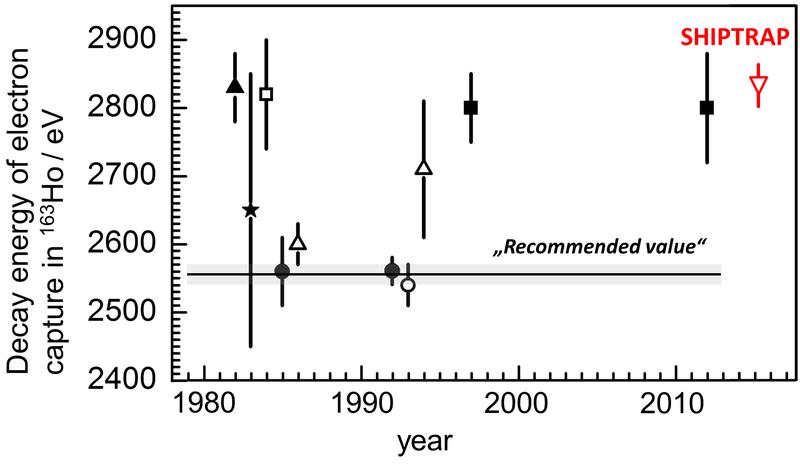