A new study just published in the Proceedings of the National Academy of Sciences by an international group headed by scientists of the Max Planck Institute for Biogeochemistry in Jena evaluated the effects of large wind farms on the atmospheric flow and its implications for how much renewable energy these can generate. As every wind turbine removes some energy from the wind, a larger number of wind turbines should result in a greater slowdown of the winds. This effect was quantified in numerical simulations with an established weather forecasting model applied to one of the windiest regions of the United States. The team found that this slowdown effect caused by wind turbines is substantial for large wind farms and resulted in proportionally less renewable energy being generated than what would be expected of an isolated wind turbine. What this implies is that this slowdown effect by large wind farms needs to be accounted for in the future planning of wind energy.

The researchers used a highly sophisticated simulation model routinely used in weather forecasting in which wind farms and their effects were incorporated and applied it to the central United States, one of the windiest regions on land. Dr. Lee Miller, lead author and scientist at the Max-Planck-Institute for Biogeochemistry in Jena, describes: “When we considered only a few turbines, we found what we expected, that more turbines generate more electricity. But when we considered more and more turbines, we found that wind speeds decreased and each turbine generated less energy.” This slowdown in winds resulted in a maximum in wind energy of about one Watt per square meter that can at most be generated within the region, which is far less than what was previously estimated for the same region without accounting for the slowdown effect.

Dr. Axel Kleidon, group leader at the Max Planck Institute for Biogeochemistry, explains that these low limits for wind energy can be understood by physics: “The atmosphere supplies the energy to sustain winds at the surface at a low rate. The more wind turbines remove this energy, wind speeds need to slow down. The combination of the two effects results in the low limit for large wind farms.”

Kleidon also agrees that current wind farms are likely operating well below this limit. Yet he argues that this limit will become important for the future transition to renewable energy when more and more wind turbines are being installed. In comparison to other forms of renewable energy, he also points out that such slowdown effects do not apply to solar energy, so that more solar panels yield proportionally more solar power.
The study is published online in the scientific journal Proceedings of the National Academy of Sciences on August 24th, 2015. 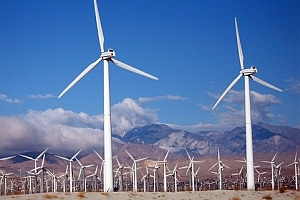