5.5 Million Euros for the European Campus

The monitoring committee of the Interreg VA Upper Rhine Program has approved funding for three joint projects at the Upper Rhine universities. The two proposals “European Campus – Cross-Border Structures” and “Upper Rhine Cluster for Sustainability Research” were submitted jointly by the Universities of Basel, Freiburg, Upper Alsace, and Strasbourg as well as the Karlsruhe Institute of Technology within the context of Eucor – The European Campus. In the case of the proposal “SERIOR,” submitted by the University of Koblenz and Landau, all of the Eucor universities are project partners. The universities will receive a total of 5.5 million euros from the European Union (EU) for the projects: “These proposals mark the beginning of a project that will transform the European higher education landscape. We are building up the first European university, and we are happy that the EU is supporting us in this endeavor,” says Prof. Dr. Hans-Jochen Schiewer, President of Eucor – The European Campus and Rector of the University of Freiburg.

European Campus – Cross-Border Structures
The central Interreg proposal “European Campus – Cross-Border Structures” involves the implementation of structural measures for the joint development of existing potential at the universities. The five universities of Eucor – The European Campus will analyze the regional science and research profile and take this analysis as a basis for a common structural and development plan. Moreover, they will work out the conditions for joint appointments of high-ranking academic staff. Finally, the universities also plan to develop new teaching and advising concepts; improve the transition to the regional employment market; promote mobility and interculturality among students, researchers, and administrative personnel; and create a common corporate identity for the European Campus. The EU will provide 2 million euros in funding for the project.

Upper Rhine Cluster for Sustainability Research
A second Interreg proposal has to do with the creation of an Upper Rhine cluster in one of the research foci of the European Campus: sustainability research. This cluster will concentrate on the general theme “governance of sustainable growth,” encompassing ecological, social, and economic sustainability. The main focus areas will be management and development of resources; transformation processes and technologies; electricity, infrastructure, and social change; and multicultural governance. The EU will provide 1.7 million euros in funding for the project.

SERIOR
The Eucor universities, the University of Koblenz and Landau, and further project partners intend to establish a trinational graduate academy on the topic of risk management and risk appraisal. A joint qualification program for junior researchers and a knowledge transfer program with businesses and political organizations will open up new research potential on the Upper Rhine. The EU will provide 1.8 euros in funding for the project.

Background information
The European Campus is the fruit of longstanding cooperation between the universities on the Upper Rhine. In 1989 they teamed up to form a trinational network called Eucor (European Confederation of Upper Rhine Universities). By establishing the European Campus, the five universities aim to take this cross-border cooperation in research and teaching to a new level in order to gain a key advantage in the international competition for the best minds and ideas. With the signing of the founding documents for a common “European Grouping of Territorial Cooperation” (EGTC) on 9 December 2015, the Universities of Basel, Freiburg, Upper Alsace, and Strasbourg and the Karlsruhe Institute of Technology are on their way to creating the first European university.

Interreg is a joint initiative of the European Regional Development Fund (ERDF) designed to promote cross-border cooperation in Europe. 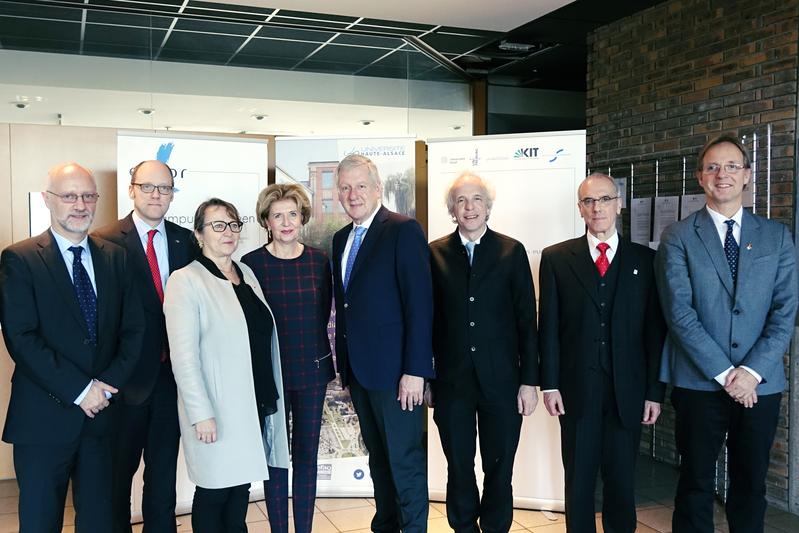