Home > Press release: The tree of life has its roots in Jena

The tree of life has its roots in Jena

How can we depict diversity? Biologists of the 19th century faced this question as they became aware not only of the huge variety of plant and animal species, but also of the connections between these species. Ultimately it was the acclaimed German biologist Ernst Haeckel who provided the answer.

Drawing on Darwin’s theory of evolution, Haeckel created the first Darwinian phylogenetic ‘tree of life’ of organisms exactly 150 years ago in Jena, and published it in his major work, the ‘General morphology of organisms’. In the current issue of the journal ‘Nature’, the historians of science and science education, Prof. Uwe Hoßfeld und Dr. habil. Georgy S. Levit of Friedrich Schiller University Jena in Germany, commemorate this anniversary.

“The idea of visually representing species and their development was already known at the time,” says Levit. “However, earlier ideas never took into account the principle of monophyly and natural selection in speciation.” This connection first emerged through the evolutionary theories of Charles Darwin. The British naturalist sketched in his diary an idea for a tree of life in 1837 and presented it in the form of a diagram in his ground-breaking work ‘On the origin of species’ in 1859. Haeckel took up Darwin’s theory of evolution in his 1866 book, ‘General morphology of organisms’, and drew the first phylogenetic ‘family tree of organisms’, or tree of life. “Phylogeny is the evolutionary history of organisms,” explains Hoßfeld. “Because Haeckel was the first actually to define this term, in that same work, he was also the only person capable of representing the first tree of life of this kind.” To be more precise, Haeckel designed the monophyletic tree of life, because it shows all three kingdoms – animals, plants and Protista (organisms that cannot be classified as a plant, animal or fungus) – arising from a common root (‘Moneren Radix’).

However, it was not only Darwin who influenced Haeckel’s creation. He was also inspired by a linguist who was his colleague and friend in Jena. “As early as 1863, the linguist August Schleicher created a first ‘family tree’ to represent the development of Indo-Germanic languages,” says Hoßfeld. “Ernst Haeckel eventually adopted this form of visualisation.”

No better method has been devised to date for illustrating biodiversity. New techniques and methodologies may have come into use, and trees of life are now presented as cladograms, diagrams, etc., but the principle remains the same. “It is quite simply the best and clearest way of representing the results of biological research in this area,” notes Hoßfeld.

The two Jena-based science historians are particularly pleased that such a renowned scientific journal as ‘Nature’ is marking this anniversary and Haeckel’s achievement. “For us it is always a success when our scientific fields attract the attention they deserve,” says Hoßfeld, who has seen six of his articles published in ‘Nature’. “It shows us that there continues to be great interest in the history of science and science education, and that they are repeatedly able to make a contribution to current debate,” adds Levit, who has had three publications in the British journal. For Friedrich Schiller University itself, such publications are evidence that Jena’s long academic tradition is consistently able to produce up-to-the-minute research.

<
Facsimile from the "tree of man" by the zoologist Ernst Haeckel.
Photo: Jan-Peter Kasper/FSU Jena
None

Prof. Uwe Hoßfeld (left) and Dr. Georgy S. Levit write in "Nature" about 150 years of trees of life and the creator Ernst Haeckel. 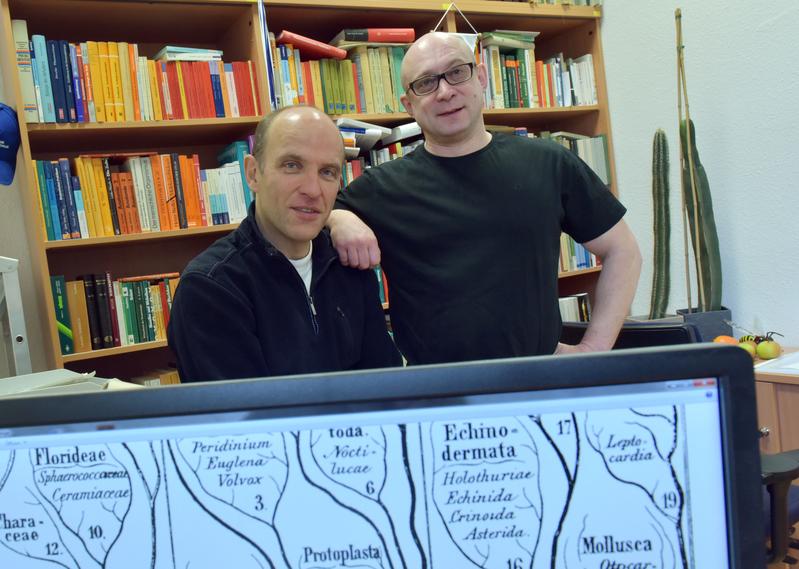 Facsimile from the "tree of man" by the zoologist Ernst Haeckel. 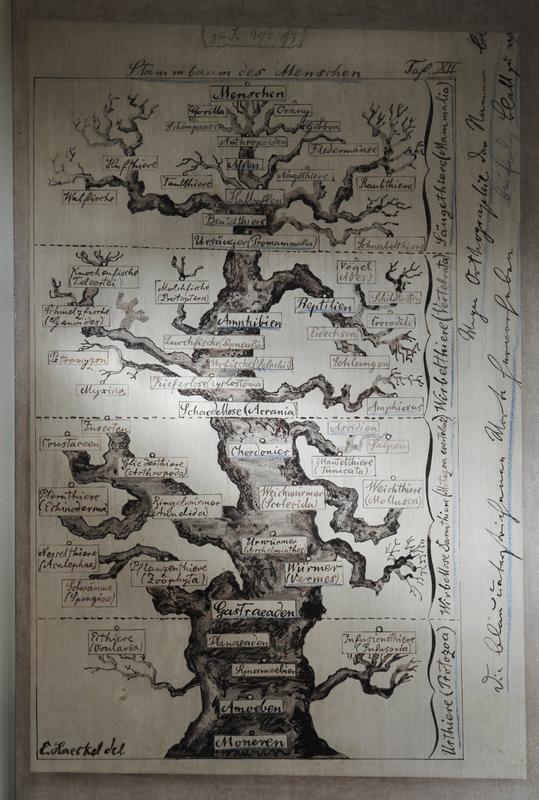