IHP presents the fastest silicon-based transistor in the world

“To present at IEDM is a valuable conclusion of the project ‘DOTSEVEN’, funded by the European Union. Together with Infineon and twelve other project partners from a total of six countries, the four-year project focused on developing SiGe HBTs with a maximum oscillation frequency, which is also referred to as fmax, of 0.7 THz,” says Dr. Bernd Heinemann, project manager at IHP. “The presented fmax values exceed the best values of current production technologies by a factor of two. Such transistors enable the realization of wire-bound and wireless communication systems with even higher data rates (> 100 Gb/s). With the fast HBTs the performance of radar systems, such as in personal cars, can be increased by reducing power consumption or increasing range and spatial resolution.”

In addition, the application becomes a reality in numerous new applications, which until now have been inaccessible to silicon components and which have been reserved for, compared to silicon technologies, the less integration-friendly solutions of III-V compound semiconductors. These newly emerging fields of application include imaging processes in the frequency range of 0.3 to 1 terahertz, which can be used for example for material testing, for safety inspections, for medical biopsies or for the detection of air pollution in the atmosphere. It should be emphasized that these components are compatible with established silicon technologies. Thus, they are suitable as key elements for cost-effective systems in a broad market.

The International Electron Devices Meeting (IEDM) has been the world’s preeminent forum for reporting technological breakthroughs in the areas of semiconductor and electronic device technology, design, manufacturing, physics, and modeling for more than sixty years. From December 3-7, 2016, leading scientists will present the latest research results to the international specialist audience.

<
The cross section shows a SiGe HBT of the latest generation, recorded by a TEM. The measurement curv ...
© IHP 2016
None

The cross section shows a SiGe HBT of the latest generation, recorded by a TEM. The measurement curves are used to determine the transit frequency and the maximum oscillation frequency. 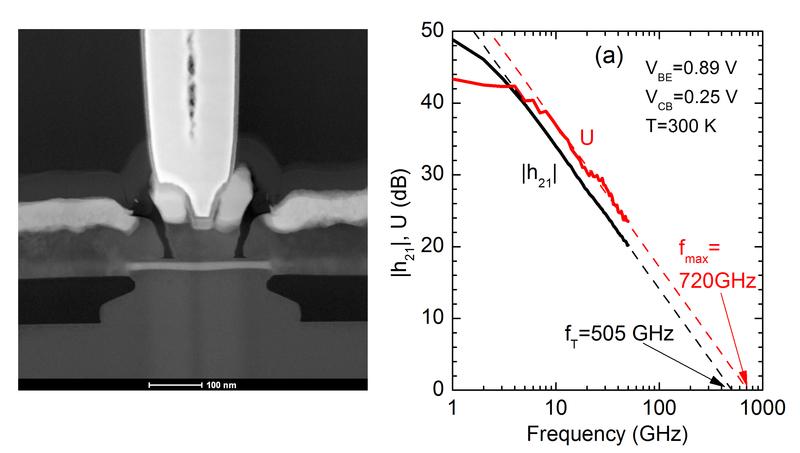