Home > Press release: How much biomass grows in the savannah?

How much biomass grows in the savannah?

Savannahs form one of the largest habitats in the world, covering around one-fifth of the Earth’s land area. They are mainly to be found in sub-Saharan Africa. Savannahs are home not only to unique wildlife, including the ‘Big Five’ – the African elephant, rhinoceros, Cape buffalo, leopard and lion – but also to thousands of endemic plant species such as the baobab, or monkey bread tree.

“What’s more, the savannahs play a significant role in the global carbon cycle and therefore affect the planet’s climate cycles,” says Victor Odipo of Friedrich Schiller University, Jena (Germany). The ability of the savannahs to store the greenhouse gas carbon dioxide is ultimately determined by the amount of aboveground woody biomass, adds Odipo, a doctoral candidate at the Institute of Geography’s Remote Sensing section. So far, though, it has been difficult to measure this important indicator, with current climate models relying on rough carbon estimates. However, a team of geographers from the universities of Jena and Oxford, and from Germany’s Federal Institute for Geosciences and Natural Resources, has now succeeded in establishing a methodology that enables them to measure the aboveground biomass of the savannahs and record even minor changes in the ecosystem. They have presented their results in the specialist journal ‘Forests’ (DOI: 10.3390/f7120294).

Three-dimensional model of the landscape

The researchers from the University of Jena use both radar data recorded by satellites and laser scanning data collected from the ground. “Radar data can record the biomass over larger geographical areas, given its coverage, but it provides insufficient information about the structure of the vegetation at localised scales,” explains Victor Odipo. Typical of the savannah is its patchwork-like structure: a mixture of grass and shrubs with trees of very different heights, either standing alone or in patches. In order to make a detailed record of this structure and be able to convert it into biomass, the satellite data is complemented by ground-based measurements. For this purpose, a terrestrial laser scanner (TLS) is used, which scans its surroundings with a laser beam within a radius of several hundred metres. “This provides us with a comprehensive three-dimensional digital model of the landscape, which enables a precise analysis of the vegetation structure,” says Jussi Baade, associate professor of Physical Geography at the University of Jena.

After exhaustive initial tests in the Stadtrodaer Forest and the slopes of the Saale valley near Jena, the researchers have now applied their methodology to the savannah of Kruger National Park in South Africa. In an area of some nine square kilometres for which radar satellite data is available, they collected laser scanning data from more than 40 plots, and integrated this data into a model for calculating the biomass. “The laser scanning data collected from selected points does give significantly more precise results than the satellite radar,” notes Christian Berger, co-author of the study and head of the research project on which Victor Odipo’s doctoral thesis is based. “But on its own, and due to smaller coverage compared with airborne data, this method is not suitable for investigating large areas.” As this study shows, however, combining the two methods allows estimation of biomass with a range of 2.9 tonnes per hectare in areas of grass and shrubs to 101.6 tonnes per hectare in areas with trees.

Monitoring changes in the ecosystem

These results cannot be used to create new climate models. “We also need reliable data to monitor changes in the savannah ecosystem,” says Victor Odipo. He points to a surprising incidental find: the researchers’ measurements showed that the biomass of a substantial part of the study area in Kruger National Park is declining from year to year. “We didn’t expect that,” says Odipo, “given that this is a nature reserve.” It turned out, however, that these changes – unlike those in most unprotected areas – were not primarily the result of human activity, but rather the work of elephants, which bring down a large number of trees.

This study was supported by the German Academic Exchange Service (DAAD), the German Research Foundation (DFG), and the Federal Ministry of Education and Research (BMBF). The terrestrial laser scanner was acquired with the help of EFRD funds from the Free State of Thuringia.

<
Victor Odipo, doctoral candidate at Jena University, and colleagues have succeeded in establishing a ...
Photo: Anne Guenther/FSU
None

Victor Odipo, doctoral candidate at Jena University, and colleagues have succeeded in establishing a methodology that enables them to measure the aboveground biomass of the savannahs. 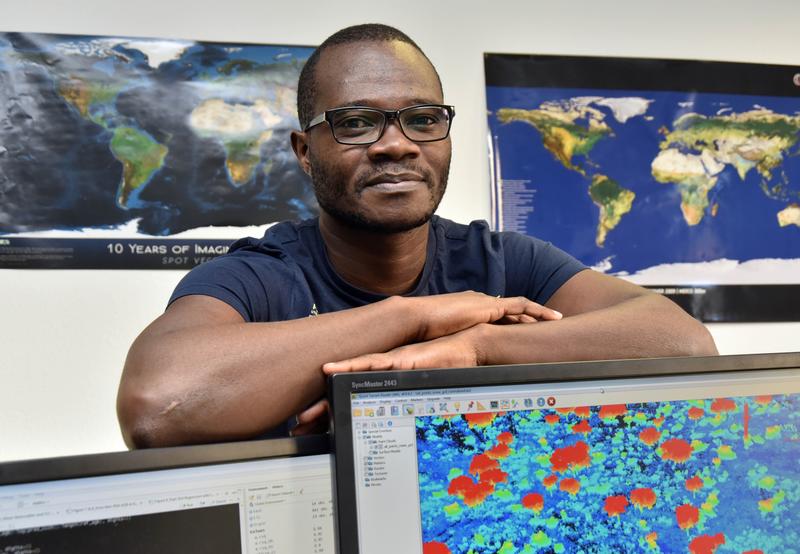