Every day billions of cells die in our body and need to be replaced by newly dividing cells. Cell division is a beautifully orchestrated process that involves multiple critical steps. At the very end, “cellular abscission” splits the membrane and thereby gives birth to two daughter cells. Abscission is executed by a protein machinery named ESCRT-III.

ESCRT-III consists of many subunits that form spiral-shaped filaments to constrict the membrane tube connecting the daughter cells until it splits. Insights into the function of ESCRT-III are also interesting for many other biological processes – as this machinery also pinches off viruses from the host cell membrane, and seals holes in cellular and nuclear membranes.
Previous models proposed that ESCRT-III forms stable filaments that constrict membranes by changing their curvature. However, such static mechanism would be different from most other cellular filament systems, like microtubules or actin filaments, which continuously turn over subunits as they change their shape.
An international research team led by IMBA group leader Daniel Gerlich and Aurélien Roux from the University of Geneva set out to explore for the first time, whether ESCRT-III undergoes dynamic remodeling. To investigate this, the team applied cutting-edge microscopy to visualize the dynamics of ESCRT subunits live in human cells. “We were very excited to find that ESCRT assemblies rapidly turn over their subunits, and that this is orchestrated by an enzyme called VPS4. We discovered that this dynamic turnover removes growth-inhibiting ESCRT-III subunits and thereby stimulates the addition of new subunits. This was surprising, because VPS4 was previously considered to mainly disassemble ESCRT-III filaments, but it actually promotes growth”, explains Beata Mierzwa, PhD student at the Vienna BioCenter and first author of the study.
To study the molecular details of ESCRT-III reorganization, the researchers recapitulated the process in a test tube using purified proteins. They then used high-speed atomic force microscopy to directly visualize dynamically growing and shrinking spiral-shaped filaments. “Our findings provide a new model for how ESCRT-III might deform membrane tubes over large distances, which was difficult to imagine in light of the previous models of persistent filaments. This will be relevant for many other biological processes involving the ESCRT-III machinery.” states Daniel Gerlich.

About IMBA
IMBA - Institute of Molecular Biotechnology is one of the leading biomedical research institutes in Europe focusing on cutting-edge functional genomics and stem cell technologies. IMBA is located at the Vienna Biocenter, the vibrant cluster of universities, research institutes and biotech companies in Austria. IMBA is a subsidiary of the Austrian Academy of Sciences, the leading national sponsor of non-university academic research.www.imba.oeaw.ac.at

About the Vienna BioCenter
The Vienna BioCenter (VBC) is a leading life sciences location in Europe, offering an extraordinary combination of research, education and business on a single campus. About 1,600 employees, more than 1,000 students, 93 research groups, 16 biotech companies, and scientists from more than 40 nations create a highly dynamic environment. www.viennabiocenter.org

<
A dynamic model of ESCRT-III illustrated by first author Beata Mierzwa
(c)BeataScienceArt.com
None

<
VPS mediates the turnover Vps4 mediates turnover of ESCRT-III subunits within growing and constricti ...
(c)IMBA
None 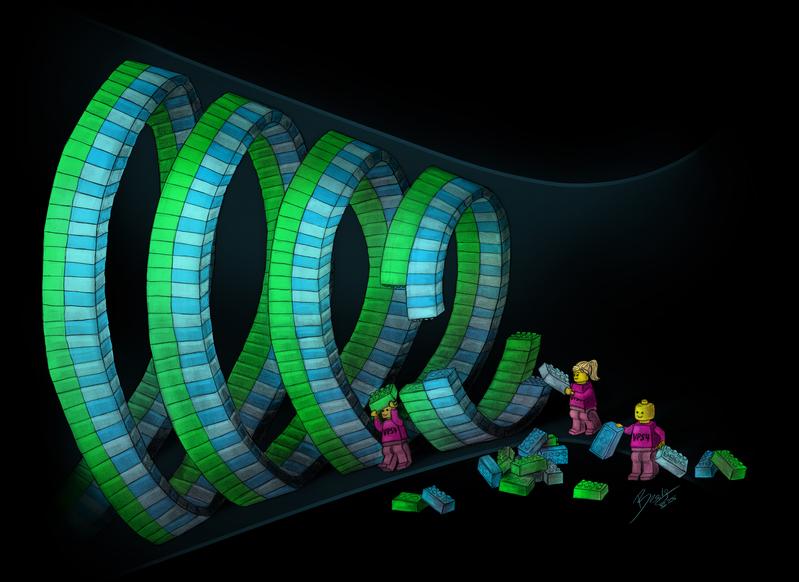