Due to the rapidly growing processing power of computers, conventional encryption of data is becoming increasingly insecure. One solution is coding with entangled photons. Fraunhofer researchers are developing a quantum coding source that allows the transport of entangled photons from satellites, thereby making an important step in the direction of tap-proof communication. In addition to the quantum source, researchers from various Fraunhofer institutes will be presenting other exciting optoelectronic exhibits at the LASER World of Photonics trade fair in Munich from June 26 - 29, 2017 (Hall A2, Booth 431 and Hall B3, Booth 327).

Whether it is information resulting from the communication between two banks, government organizations or private individuals, the encryption of data is now mostly based on mathematical methods. The problem is that the increasing processing power of computers makes the decoding of encrypted messages progressively easier – evelopments such as quantum computers could even mean the elimination of current encryption methods, since much more effective decryption algorithms can be used in this regard than is possible with conventional computers.

Encryption by means of a physical principle, the so-called quantum entanglement offers a solution: first, twin-photons are generated which are entangled with each other regarding certain quantum states and which are therefore dependent upon each other. In other words, if the polarization of the one photon is measured, for example, then that of the twin is also known automatically. What is special about this is that the effect works independently of the distance between the photons. Based on this, codes can be generated that allow the sender and receiver to see at a glance whether third parties have attempted to manipulate or tap the codes. "The central element here is the quantum source in which the photons are entangled," explains Dr. Erik Beckert of the Fraunhofer Institute for Applied Optics and Precision Engineering IOF in Jena, Germany. "The entangled photons are generated in a sophisticated laser-optic assembly and then directed via different channels to the two parties that want to protect their communication from listeners."

But how do the entangled photons reach their destination? If, for example, they are sent through the air or glass fiber via an open jet line, the range is limited, since the turbulence of the atmosphere or the damping of the glass fiber interferes with the entanglement. The solution: The quantum source distributes the entangled photons from a satellite. As a result, the photons only have to travel a relatively short distance through the atmosphere until they reach their receiver. To place a quantum source on a satellite, though, it has to be extremely stable. This is because it has to resist both the impacts of a rocket launch as well as the special conditions in space, such as strong temperature fluctuations and radiation.

Researchers at the Fraunhofer IOF have found an answer and are developing a quantum source which is so stable that the precise calibration and the difficult adjustments are not disturbed even by the extreme stress of a rocket launch or the inhospitable conditions in space. "Our quantum source is an example of optomechanical engineering," says Beckert. "Laser systems for entangling and distributing photons are very sensitive in terms of accuracy. Even the smallest changes in the adjustment make the whole system unusable. A system has to be so sturdy that its full performance is not even affected by a rocket launch."

Fraunhofer at the LASER World of Photonics

In addition to the engineering model of the Fraunhofer IOF’s quantum source, nine other institutes will be presenting the latest developments from the field of optoelectronics at the LASER World of Photonics trade fair. The Fraunhofer experts will be demonstrating their technology skills by means of numerous exhibits at two booths (Booth 431 in Hall A2 and Booth 327 in Hall B3). The core of their activities are contract research and development in the broad field of optical technologies. The spectrum ranges from optics design and laser source development through optical measuring systems and optomechanical precision systems to the micro- and macro-processing of different materials with lasers. The offer includes process and system solutions as well as feasibility studies and qualified consulting.

Fraunhofer IOF‘s quantum source. Designed to be fully operational even after extreme stress. 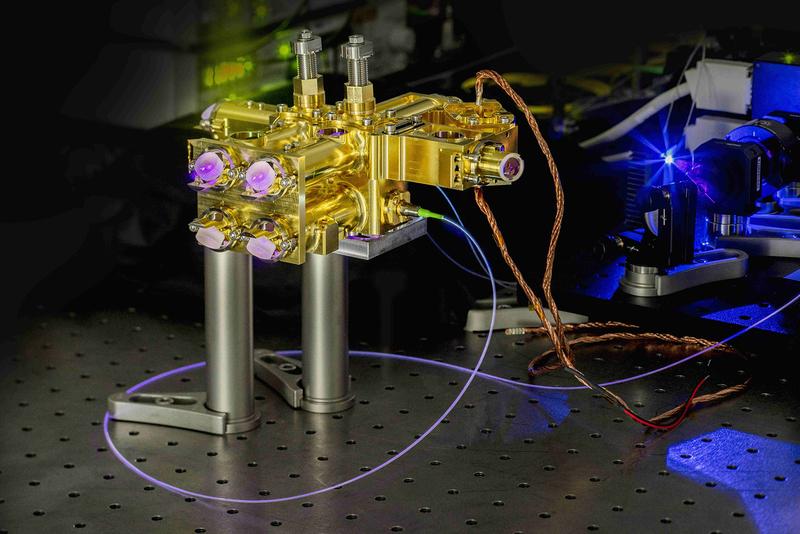