Many industrial processes depend on exact pressure gauges. The SOI high-pressure sensors (silicon-on-insulator) developed by the Fraunhofer Institute for Reliability and Microintegration IZM makes this exact monitoring possible for processes operating at temperatures of up to 400° centigrade. The sensor promise an exceptionally long life as well as precision and efficiency. To keep up with technological requirements, future iterations of the sensors will be designed to withstand temperatures above 600° centigrade.

The SOI sensor will mostly be used in extrusion facilities in plastic processing. The process depends on filling moulds completely with the plastic raw material. This is where the SOI comes in: It measures pressure precisely and notifies the system immediately when the injected plastic reaches a certain point. SOI stands for Silicon-on-Insulator and refers to a sensor encased in a layer of silicon dioxide for complete electrical insulation. The outer SOL (Silicon-Over-Layer) on top of that layer includes independent piezoresistors in the silicon membrane. Traditional MEMS pressure sensors use the layer between the positive and negative doping – the so-called p-n transition – as insulation, allowing a current to pass in one direction only. MEMS is an acronym for Micro-Electro-Mechanical Systems and refers to miniature components that process mechanical and electrical information. By stark contrast to SOI sensors, MEMS sensors can only be used at temperatures up to around 125° centigrade.

The sensor, developed with input from the Technical University of Berlin, relies on SOI technology to work without any addition of oils or other liquids that more traditional sensors often depend on. Its obvious advantage: The sensor input is not affected by any temperature effects on that liquid. By not requiring expensive and complicated filler technologies, the SOI sensor reduces the environmental impact of the system to become a genuine alternative for a future in which oil or mercury can be expected to be banned from many products. The accurate measurements of the sensor will also save time and material in injection molding, making it more efficient by comparison to traditional technologies. The key selling point, however, is its ability to withstand the high temperature and tough conditions that exist whenever liquid plastics are processed.

To prevent environmental effects, the SOI chip is housed in a glueless ceramic body, attached to a steel membrane that is connected with a steel cylinder. The sensor is fitted neatly in a so-called ‘floating’ design: It floats in the casing between the electrical contacts, which avoids any need for additional filler. The SOI chip is connected to the case by wire bonding.Future high-pressure sensors will operate at temperatures of 600° centigrade and beyond. This requires a replacement for the silicon, as it becomes self-conducting at more than 400° centigrade. One candidate is silicon carbide, which retains much better electrical properties even at extreme temperatures and is already being analyzed as a potential replacement. The Fraunhofer IZM has taken the lead in applied research in high-temperature applications and is cooperating with Gefran SPA who commissioned the high-temperature sensors. 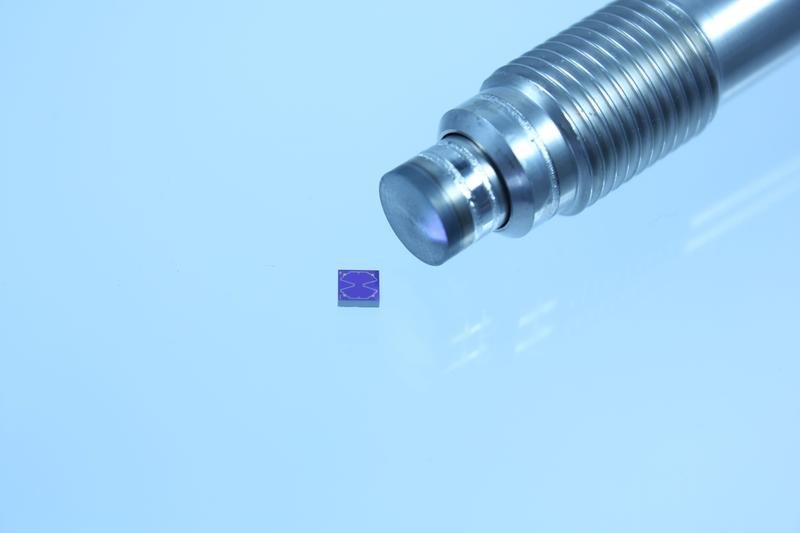