What is the mass of a proton? Scientists from Germany and Japan successfully did an important step towards the most exact knowledge of this fundamental constant. By means of precision measurements on a single proton, they could improve the precision by a factor of three and also correct the existing value.

To determine the mass of a single proton still more accurate – a group of physicists led by Klaus Blaum and Sven Sturm of the Max Planck Institute for Nuclear Physics in Heidelberg did this not only just for fun or to set a new record. The proton is the nucleus of the hydrogen atom and building block in all other atomic nuclei. Therefore, the proton’s mass is an important parameter in atomic physics: Among other things it affects how the electrons move around the atomic nucleus. This is reflected in the spectra, i.e., the light colours (wavelengths) atoms can absorb and emit again. By comparing these wavelengths with theoretical predictions, it is possible to test fundamental physical theories. Further, a precise comparison of the masses of the proton and the antiproton may help in the search for the crucial difference – besides the reversed sign of the charge – between matter and antimatter. This difference is tiny, but it has to exist, since the Universe practically completely consists of matter, although in the Big Bang matter and antimatter must have been created in equal amounts.

Penning traps are well-proven as suitable “scales” for ions. In such a trap, it is possible to confine single charged particles such as a proton nearly forever, by means of electric and magnetic fields. Inside the trap, the snared particle performs a characteristic motion that can be described by three frequencies. These frequencies can be measured and the mass of the particle calculated therefrom. In order to reach the targeted high precision, an elaborate measurement technique was required.

The carbon isotope 12C with a mass of 12 atomic mass units is defined as the mass standard for atoms. “We directly used it for comparison”, tells Sven Sturm. “First we stored each one proton and one carbon ion (12C6+) in separate compartments of our Penning trap apparatus, then transported alternately each one of the two ions into the central measurement compartment and measured its motion.” From the ratio of the two measured values one obtains the proton’s mass directly in atomic units. The measurement compartment is equipped with specifically developed purpose-built electronics. Andreas Mooser of RIKEN in Japan explains its function: „It allowed us to measure the proton under identical conditions as the carbon ion despite its about 12-fold lower mass and 6-fold smaller charge.”

The resulting mass of the proton of 1.007276466583(15)(29) atomic mass units is three times more precise than the presently recommended value. The numbers in parentheses refer to the statistical and systematic uncertainties, respectively.

However, the new value is significantly smaller than the current standard value. Measurements by other authors yielded discrepancies with respect to the mass of the tritium atom, the heaviest hydrogen isotope (T = 3H), and the mass of light helium (3He) compared to the “semiheavy” hydrogen molecule HD (D = 2H, deuterium, heavy hydrogen). “Our result contributes to solving this puzzle, since it corrects the proton’s mass in the proper direction”, says Klaus Blaum delightedly.

Florian Köhler-Langes of MPIK explains how the researchers intend to further improve the precision of their measurement: “In the future, we will store a third ion in our trap tower. By measuring simultaneously the motion of this reference ion, we will be able to eliminate the uncertainty originating from fluctuations of the magnetic field.” 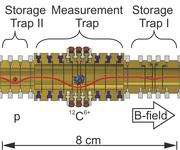 Sketch of the Penning trap apparatus for measurement of the proton’s mass. Different voltages applied to the cylindrical electrodes (yellow) generate the trapping potential indicated by the red line. 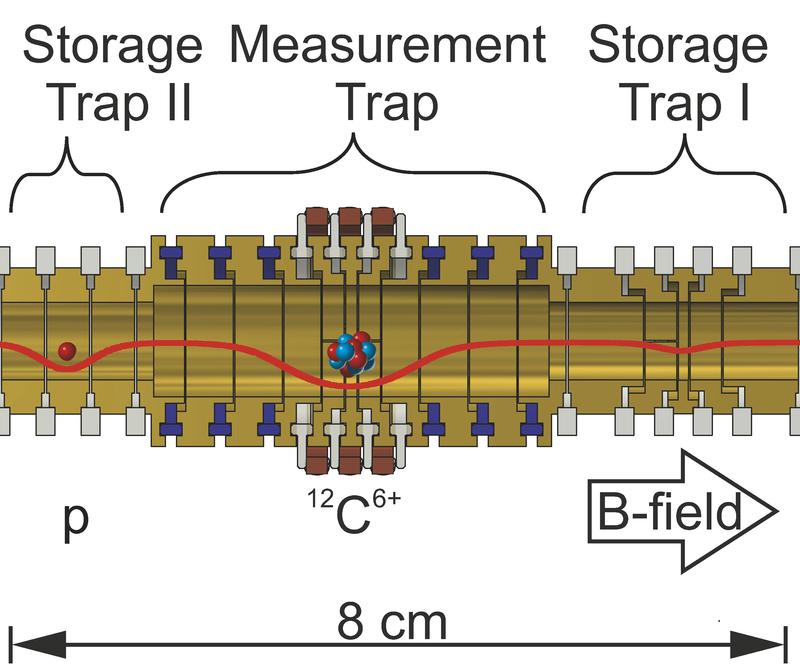