Diamond coatings help reduce friction and wear on tools, bearings, and seals. Lubricating diamond with water considerably lowers friction. The reasons for this are not yet fully understood. The Fraunhofer Institute for Material Mechanics IWM in Freiburg and the Physics Institute at the University of Freiburg have discovered a new explanation for the friction behavior of diamond surfaces under the influence of water. One major finding: in addition to the known role played by passivation of the surfaces via water-splitting, an aromatic passivation via Pandey reconstruction can occur. The results have been published in the journal Physical Review Letters.

Diamond coatings are commonly used today to protect tools and machine components that are subjected to high wear, and thus to extend their service life. It is known that rubbing two dry diamond surfaces together creates enormous friction due to the bonding of reactive carbon atoms on each surface with the corresponding atoms on the opposite surface. If atmospheric moisture is added, the water molecules split and hydrogen and hydroxyl groups bond with the reactive carbon. The surface is saturated and the friction coefficient drops sharply. However, continued rubbing can produce new reactive carbon atoms, which again bind with the opposite surface. It is thus important to achieve swift repassivation. “To make progress on this point, we wanted to understand more precisely how the friction depends on the amount of water,” says Prof. Dr. Moseler, Head of the Multiscale Modeling and Tribo-Simulation Group at Fraunhofer IWM. He and his colleagues Dr. Takuya Kuwahara and Dr. Gianpietro Moras therefore carried out large-scale quantum molecular dynamics calculations with water-lubricated diamond surfaces. To be able to identify precisely the friction mechanisms, different quantities of water molecules were added.

The simulation yielded surprising results. The first trial, with very few water molecules, confirmed the presence of covalent bonds between the dry friction partners, also called cold welding, which result in high levels of friction. This also causes the amorphization of carbon, i.e., the breakdown of the crystalline structure at the surface. Another simulation using slightly more water resulted in a different situation. In this case, the two rubbing surfaces bonded via ether groups. This form of cold welding also results in high friction, but no amorphization occurs. Simulations with sufficient quantities of water confirmed the known saturation of the surfaces with hydrogen and hydroxyl groups. However, in their simulation the researchers were able to identify yet another completely unknown friction case. "With the addition of few water molecules, an aromatization of the structure of one of the rubbing surfaces in the form of a Pandey reconstruction was observed,” explains Gianpietro Moras. “That means that the diamond surface passivates itself through an annular arrangement of the carbon atoms.” In this case, the other surface becomes saturated with hydrogen and hydroxyl groups. As a result, a very small coefficient of friction develops.

The results can be transferred to other materials

The Pandey reconstruction can be viewed as a step towards a complete reconstruction of the surfaces. “In further simulations we were able to see that the ring structure can develop into graphene domes, which further reduce friction,” says Moseler. Future experiments will investigate how the aromatization can be selectively forced, for example by doping the diamond surface. “Although most of our results can be transferred to other water-splitting materials, it is important to note that aromatic passivation is a specialty of carbon,” adds Moras. The researchers therefore assume that aromatic restructuring is also possible with amorphous carbon surfaces. 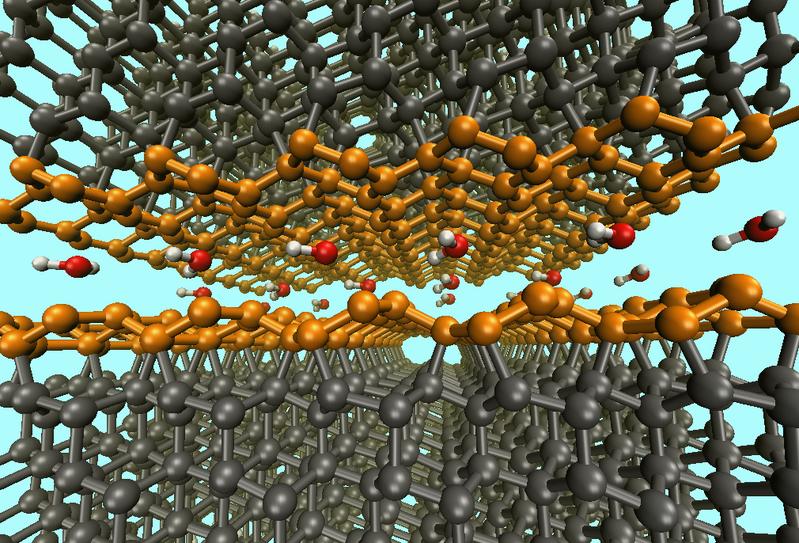