Ions in the spotlight

The results of a research group from the Institute of Physics at the University of Freiburg has been given a special place in the “Nature Photonics” journal: an accompanying “News & Views” article in the print version of the science journal highlights the work of the team led by Alexander Lambrecht, Julian Schmidt, Dr. Leon Karpa and Prof. Dr. Tobias Schätz. In their article “Long lifetimes and eﬀective isolation of ions in optical and electrostatic traps”, the work group describes the method they used to prevent the previously unavoidable driven motion of trapped charged atoms.

The experiment begins by trapping individual Barium ions in a quadrupole ion trap, known as a Paul trap. A quadrupole ion trap can store charged particles for days using alternating electric fields. However this results in the ion constantly swirling on a microscopic scale and executing a forced driven motion. This often leads to undesirable side-effects. For example, in current experiments with ultracold atoms, the ions heat up the bath of neutral atoms – which is actually far cooler – like an immersion heater, instead of being cooled. This causes the temperature to rise by a factor of 10,000. Although this is still barely a thousandth of a degree Celsius above absolute zero, it already leads to heat death for sensitive quantum effects.

This is where the method that the group has been developing for its objectives since 2010 comes in: optical trapping of charged atoms. An extremely bright laser is used to trap the ion in its beam without compelling additional movement. A few years ago it was only possible to optically trap ions for a few milliseconds. Thanks to the work of the Freiburg physicists, it is now possible to trap charged atoms for similar timescales as neutral atoms in comparable optical traps – a lifetime of several seconds is several times longer than is required for experiments. In addition, the researchers have shown that they can also isolate the ions adequately from the remaining outside world. The team now hopes to use this method to achieve 10,000-times lower temperatures and observe ultracold chemical processes in which quantum effects will dominate the interaction of the particles.

In 2015 Tobias Schätz received a Consolidator Grant from the European Research Council (ERC) for his approach to trapping atoms and ions with light: www.pr.uni-freiburg.de/pm/2015/pm.2015-02-17.18

Caption
Lasers of various wavelengths are used to cool the ions to a thousandth of a Kelvin at the start of an experiment.
Photo: Julian Schmidt 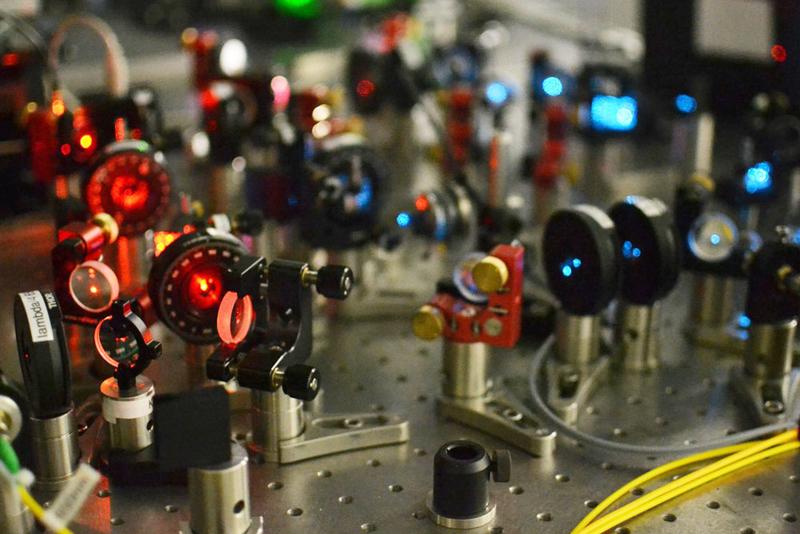