Neutron Stars on the Brink of Collapse
Advanced Search ?

Home > Press release: Neutron Stars on the Brink of Collapse

Neutron Stars on the Brink of Collapse

Neutron stars are the densest objects in the Universe; however, their exact characteristics remain unknown. Using simulations based on recent observations, a team of scientists including HITS researcher Dr. Andreas Bauswein has managed to narrow down the size of these stars.

hen a very massive star dies, its core contracts. In a supernova explosion, the star’s outer layers are expelled, leaving behind an ultra-compact neutron star. For the first time, the LIGO and Virgo Observatories have recently been able to observe the merger of two neutron stars and measure the mass of the merging stars. Together, the neutron stars had a mass of 2.74 solar masses. Based on these observational data, an international team of scientists from Germany, Greece, and Japan including HITS astrophysicist Dr. Andreas Bauswein has managed to narrow down the size of neutron stars with the aid of computer simulations. The calculations suggest that the neutron star radius must be at least 10.7 km. The international research team’s results have beenpublished in “Astrophysical Journal Letters.”

The Collapse as Evidence

In neutron star collisions, two neutron stars orbit around each other, eventually merging to form a star with approximately twice the mass of the individual stars. In this cosmic event, gravitational waves – oscillations of spacetime – whose signal characteristics are related to the mass of the stars, are emitted. This event resembles what happens when a stone is thrown into water and waves form on the water’s surface. The heavier the stone, the higher the waves.

The scientists simulated different merger scenarios for the recently measured masses to determine the radius of the neutron stars. In so doing, they relied on different models and equations of state describing the exact structure of neutron stars. Then, the team of scientists checked whether the calculated merger scenarios are consistent with the observations. The conclusion: All models that lead to the direct collapse of the merger remnant can be ruled out because a collapse leads to the formation of a black hole, which in turn means that relatively little light is emitted during the collision. However, different telescopes have observed a bright light source at the location of the stars’ collision, which provides clear evidence against the hypothesis of collapse.

While neutron stars have a slightly larger mass than our Sun, their diameter is only a few 10 km. These stars thus contain a large mass in a very small space, which leads to extreme conditions in their interior. Researchers have been exploring these internal conditions for already some decades and are particularly interested in better narrowing down the radius of these stars as their size depends on the unknown properties of density matter.

The new measurements and new calculations are helping theoreticians better understand the properties of high-density matter in our Universe. The recently published study already represents a scientific progress as it has ruled out some theoretical models, but there are still a number of other models with neutron star radii greater than 10.7 km. However, the scientists have been able to demonstrate that further observations of neutron star mergers will continue to improve these measurements. The LIGO and Virgo Observatories have just begun taking measurements, and the sensitivity of the instruments will continue to increase over the next few years and provide even better observational data. “We expect that more neutron star mergers will soon be observed and that the observational data from these events will reveal more about the internal structure of matter,” HITS scientist Andreas Bauswein concludes.

The Heidelberg Institute for Theoretical Studies (HITS) was established in 2010 by the physicist and SAP co-founder Klaus Tschira (1940-2015) and the Klaus Tschira Foundation as a private, non-profit research institute. HITS conducts basic research in the natural sciences, mathematics and computer science, with a focus on the processing, structuring, and analyzing of large amounts of complex data and the development of computational methods and software. The research fields range from molecular biology to astrophysics. The shareholders of HITS are the HITS Stiftung, which is a subsidiary of the Klaus Tschira Foundation, Heidelberg University and the Karlsruhe Institute of Technology (KIT). HITS also cooperates with other universities and research institutes and with industrial partners. The base funding of HITS is provided by the HITS Stiftung with funds received from the Klaus Tschira Foundation. The primary external funding agencies are the Federal Ministry of Education and Research (BMBF), the German Research Foundation (DFG), and the European Union.

<
Simulations of a neutron star merger. Upper row: the star collapses after the merger and forms a bla ...
Picture: Andreas Bauswein, HITS

Simulations of a neutron star merger. Upper row: the star collapses after the merger and forms a black hole. Lower row: The scenario leads to an at least temporarily stable star. 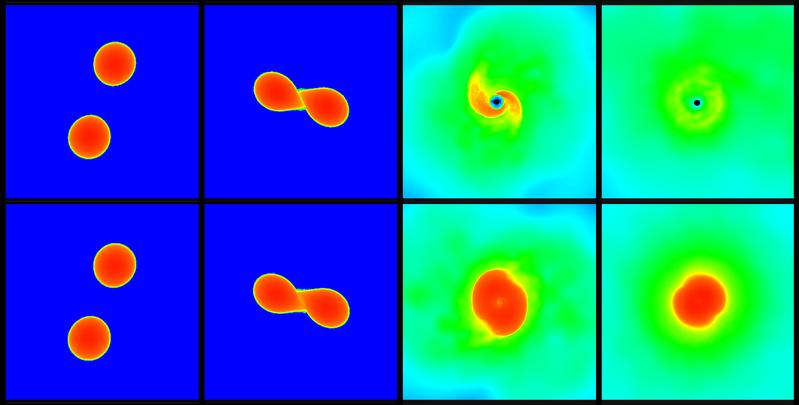