Biological soil crusts (biocrusts) are communities of cyanobacteria, lichens, algae and bryophytes which, together with fungi, bacteria and archaea, grow in the upper three to five millimeters of soil. They can be broadly classified into three types: cyanobacteria-, lichen- or bryophyte-dominated biocrusts, depending on their stage of development. Biocrusts transition between these three types over the course of their development in a process of succession. In conjunction with scientists from the University of Graz, researchers from the Max Planck Institute for Chemistry have now taken a closer look at these different types of biocrust. Their objective was to find out how the bacterial and fungal composition changes during biocrust formation and over the course of the succession process. Their results demonstrate that there are big changes in bacterial diversity over the course of biocrust development and that fungi become more and more significant as the crust develops. This is accompanied by changes in metabolism, which are dependent on the composition of the biocrust community. The study was published at the end of January 2018 in the ISME Journal (International Society for Microbial Ecology), part of the Nature Publishing Group.

In planning the study, the researchers were interested in three key questions: Which heterotrophs (organisms which take up organic compounds from the environment for use as carbohydrate and energy sources) live in biological soil crusts? Do photoautotrophs (organisms which use sunlight as an energy source for the synthesis of organic compounds) in the top soil layer affect bacteria and fungi growing in deeper layers? And can different bacterial and fungal communities affect metabolic processes in different crust types? “We extracted DNA from heterotrophic layers from different crust types and analyzed both how much bacterial and fungal material and which organisms were present,” explains Stefanie Maier, a postdoc at the MPI for Chemistry. Over the course of biocrust development, they observed a clear increase in the absolute amount of bacteria and fungi and a relative increase in the amount of fungi. Specifically, in bare, uncolonized soils there was about one fungus to every 700 bacteria, while in bryophyte-dominated biocrusts there was about one fungus to every 20 bacteria.

Bacterial diversity in biocrusts is comparable to deciduous forest soils

To determine how many bacterial species were living in the biocrusts, Stefanie Maier and her colleagues calculated the Shannon index – a mathematical measure of biodiversity within a habitat. “The Shannon index score is comparable to that for deciduous forest soils in our region,” explains Alexandra Tamm, a doctoral student at the MPI for Chemistry. “This suggests that biocrusts are host to a level of bacterial diversity comparable to that of forest soils in temperate regions.” The scientists then took a closer look at the bacteria and found that the range of bacterial species included both generalists (which have less specialized environmental requirements and can colonize a range of habitats) and specialists (which are specifically adapted to conditions in the various crust types or in soil).

Comparison measurements on bare, uncrusted soil showed that bacterial composition changes fundamentally during soil crust formation. “The composition of bacteria and fungi within biocrusts appears to be primarily determined by the dominant photosynthetic component (cyanobacteria, lichens or bryophytes) in the crust and the metabolites they release,” explains Bettina Weber, Group Leader in the Multiphase Chemistry Department at the MPI for Chemistry.

Variations in bacterial and fungal composition also appear to be responsible for differences in metabolism between the various crust types, such as the release of gaseous nitrogen compounds and respiratory processes. Further studies will be required to determine the individual roles of the various organisms. “It is fascinating to realize that there is such an enormous hidden diversity, which affects a very wide range of processes that we are only just beginning to understand,” explains Bettina Weber enthusiastically. 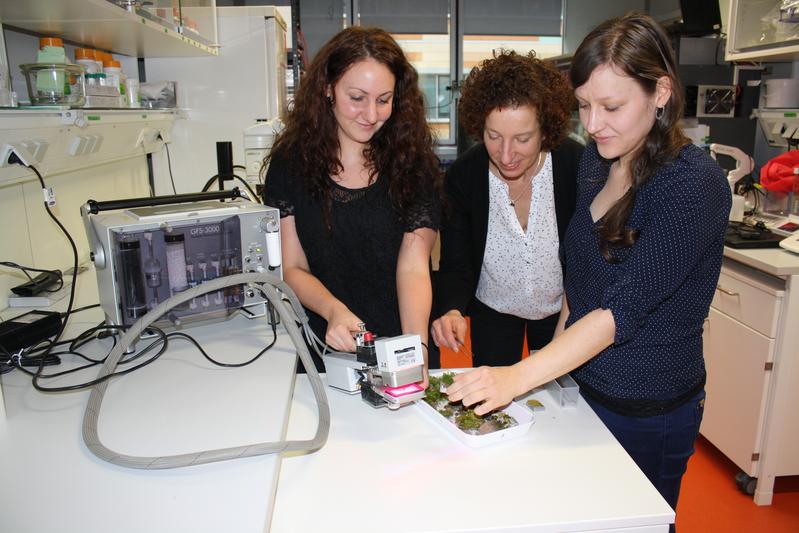