An international team of scientists, including physicists from the University of Greifswald, have succeeded in explaining the “mercurial” behavior of exotic mercury isotopes. This was made possible by producing the particles 177Hg to 185Hg and studying them at the ion separator ISOLDE, located at the European research center CERN. The results are reported in the journal Nature Physics (issue of 01. Oct. 2018).

Back in the 1970s, fluctuations in the size of atomic nuclei were observed during measurements of the optical spectra of electrons in the atomic shells of certain mercury isotopes. The phenomenon was traced to changes of the nuclear shape as a function of mass number A, namely back and forth from slightly oblate to the shape of a rugby ball. This striking behavior was found below A = 186. There was a big jump of the nuclear radius at A = 185. It reoccurred at the two preceding odd-numbered isotopes, i.e. those with A = 183 and 181, whilst the even-numbered isotopes, A = 184 and 182, followed the general trend.

Only now, more than 40 years later, and by applying cutting-edge research technology, was it possible to answer the two previously unanswered questions: Does this jumping from one nuclear shape to another continue at lower mass numbers? And how can this unique behavior be traced to the internal structure of those nuclei?

The first question has now been answered using new experimental approaches. The challenge was to extend the studies along the entire chain of isotopes down to the short-lived isotopes as far as 177Hg, i.e. to half-lives of just the blink of an eye. To be able to measure this, the experiments had to combine recent technical developments for the first time. This included the use of the Multi-Reflection Time-of-Flight Mass Spectrometer from Greifswald https://idw-online.de/de/news539615, belonging to the ISOLTRAP setup http://isoltrap.web.cern.ch/isoltrap/.

The extremely sensitive and selective detection methods made it possible to show that the special behavior of the mercury isotopes stops at mass numbers below A = 180, where only the “normal”, slightly oblate nuclear shapes are found.

In addition to these experiments, colleagues from theoretical physics performed extensive calculations, which were able to trace the observed behavior back to certain quantum mechanical states of the protons and neutrons in the nuclei. Thus, it was not only the four-decade-long puzzle concerning the neutron-deficient mercury nuclei that was solved. In addition, the results demonstrate the reliability of the nuclear calculations that can now also be applied with confidence to other regions of the nuclear chart, the “periodic system of atomic nuclei”.

Apart from the Atomic and Molecular Physics Research https://physik.uni-greifswald.de/ag-schweikhard/ group at the University of Greifswald’s Institute of Physics, further ISOLTRAP-collaboration members from CERN http://home.cern/, from the Max-Planck-Institut für Kernphysik in Heidelberg https://www.mpi-hd.mpg.de/mpi/start/, as well as from the Universities of Dresden https://tu-dresden.de/, Manchester (Great Britain) http://www.manchester.ac.uk/ and Paris-Sud (France) http://www.u-psud.fr/ contributed. Furthermore, several other groups were involved in the experiments, including laser spectroscopists from the University of Mainz http://www.uni-mainz.de/.

The images can be downloaded and used for free for editorial purposes in combination with this press release. You must name the respective author of the image. 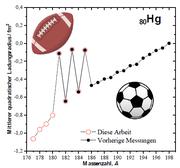 <
Experimental data of the mean squared charge radius of mercury nuclei (in deviations from the A = 19 ...
Image: Frank Wienholtz
None

Dinko Atanasov (MPIK Heidelberg, left) and Frank Wienholtz (Uni Greifswald and CERN) behind the MR-ToF MS component of the ISOLTRAP setup in the ISOLDE experimental hall at CERN 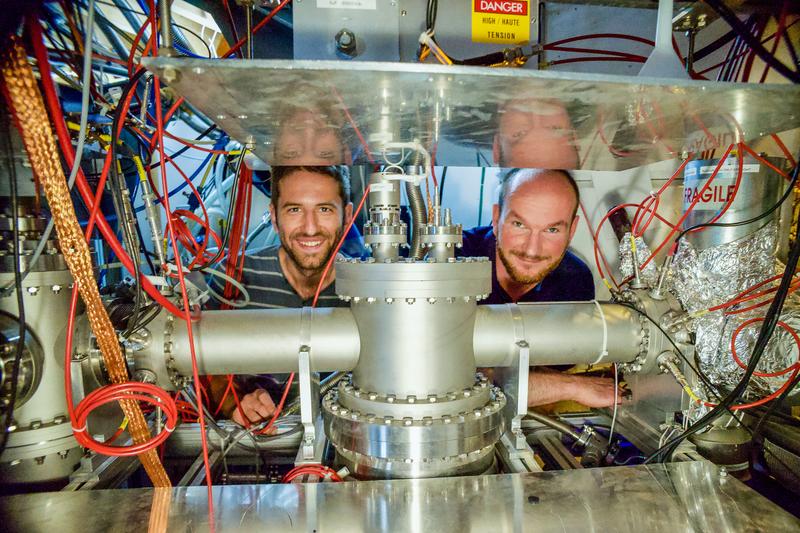 Experimental data of the mean squared charge radius of mercury nuclei (in deviations from the A = 198 nucleus) as a function of mass number. 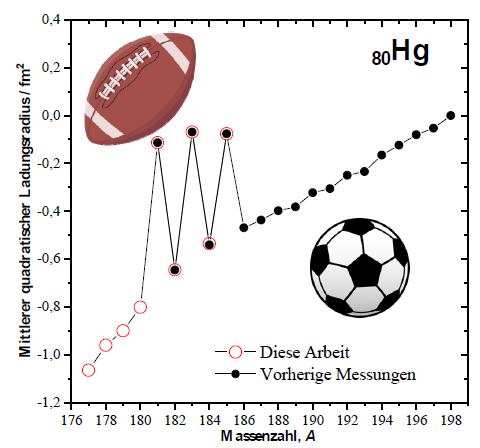