Home > Press release: Wound healing with the power of nanofibers

Wound healing with the power of nanofibers

The healing of injuries, especially of severed nerve tracts, nowadays requires complex methods, such as sewing the two nerve stumps together. Scientists from the department of Prof. Tanja Weil (Max Planck Institute for Polymer Research), led by Dr. Christopher Synatschke, have now developed a new type of biomaterial in cooperation with researchers led by Prof. Bernd Knöll from the Institute of Physiological Chemistry at the University of Ulm.

In the case of injuries of the so-called peripheral nervous system, which are often caused by accidents, the prognosis of healing depends very much on whether the nerve tracts are still partially connected or how large the gap between two nerve endings is. For gaps in the range from millimeters to centimeters, surgery is nowadays the standard treatment method that promises at least partial regeneration. In this case, the separated nerve ends are sutured together again. The aim is to bring the nerve ends close together so that the remaining small gap is closed by the formation of cells by the body.

Scientists led by Christopher Synatschke, Tanja Weil and Bernd Knöll are working together on the development of fluids that contain nanofibers. These are molecular strands dissolved in water with a thickness of several billionth of a meter. These serve as a scaffold or adhesive base for cells and are non-toxic to the human body. Such a fiber consists of so-called peptides - short chains of amino acids that can also be found in human proteins. These chains can form a two-dimensional grid or three-dimensional network to which cells such as nerve cells or muscle cells can adhere.

The fluid developed by Synatschke and his colleagues can be injected into wounds. It remains there for many weeks before it is degraded by the body's own processes.

The challenge in the production of a peptide-based bio-network is to identify those possible combinations of molecules - so-called sequences - that combine good biocompatibility with optimal cell adhesion. For this, the scientists first produced a series of nanofibers with systematic changes in their peptide sequence and tested them in cell cultures. Using detailed molecular analyses and a computer-assisted algorithm, recurring features in the molecular structure could be identified that are expected to be highly suitable for the regeneration of nerve cells. The peptide sequences identified in this way were then examined in detail in a series of cell tests for their ability to support neuronal growth.

"Our bionetwork can be imagined as a rank grid for tomato plants," said Synatschke. "Without grids, the plants cannot grow upwards. Transferred to tomato plants, we have selected a grid to which the plant can adhere well. On a miniaturized scale, our material helps the nerve cells to bridge the gap between two nerve endings."

In order to realistically test the function of the best material, a facial nerve that controls the muscle responsible for the whiskers of mice was cut in a minimal surgical intervention in cooperation with the University of Ulm. The researchers used video recordings to observe the mice over a period of several weeks. They found that mice which had been injected with the biomaterial at the artificially created space between the nerve endings recovered faster and more comprehensively than untreated mice.

After further in-depth medical studies, the researchers hope to develop an alternative method to treat human nerve damage by supporting the healing by a bionetwork scaffold in the wound.
The scientists assume that the body's own growth-promoting proteins remain longer in the wound due to the presence of the peptide chains. In the future, it would therefore be conceivable to functionalize the chains in such a way that, in addition to the scaffold structure, cell growth-promoting molecules are introduced into the biomaterial in order to further increase the healing potential.

<
Nerve cells (green) can grow and adhere to a stable bionetwork (blue) in order to support the healin ...
©: MPI-P, License CC-BY-SA
None

Nerve cells (green) can grow and adhere to a stable bionetwork (blue) in order to support the healing of a severed nerve. 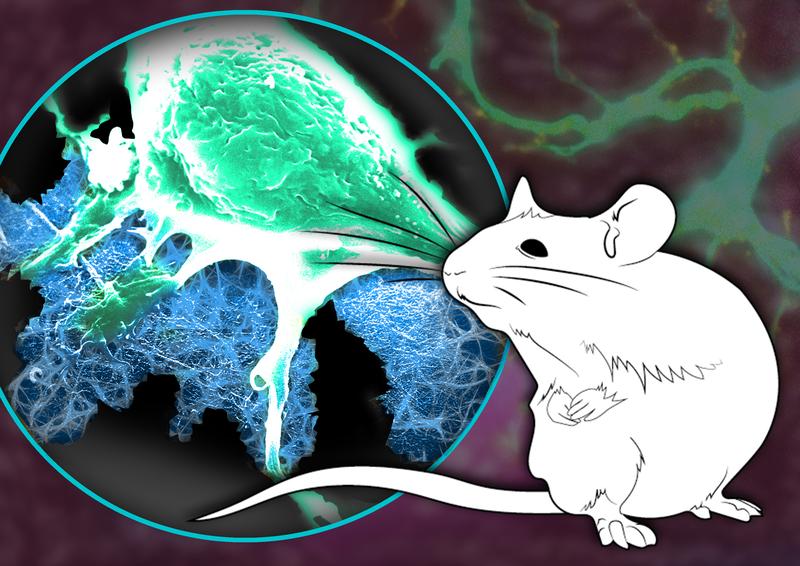