Dr. Alessandro Ori of the Leibniz Institute on Aging – Fritz Lipmann Institute (FLI) in Jena has been honored as best junior scientist with the Beutenberg Campus Award “Life Science and Physics” of the Beutenberg Campus e.V. on May 16, 2019. Dr. Ori is heading the research group “Aging of Protein Complexes” at FLI and is investigating the impact of aging and environmental factors on organs on a molecular level. The award was presented in Jena as part of the “Noble Talks” event with Prof. Dr. Detlef Weigel of the Max Planck Institute for Developmental Biology, Tübingen.

Dr. Alessandro Ori is an expert on the field of mass spectrometry based proteomics. He uses advanced analytical methods to characterize large protein complexes in detail and to gain insight into the proteome to understand how biological systems work, for example during aging. He employs unbiased approaches to scrutinize the total proteomic makeup of biological systems. For his research, he combines ultra-sensitive mass spectrometry with other omics-technology and bioinformatics approaches.

By pioneering the integration of proteomic and genomic approaches, Dr. Ori performed time-resolved analyses revealing a new perspective on the whole cell’s proteome composition and spatiotemporal changes of protein complex stoichiometries. He was the first to demonstrate that multiple mechanisms contribute to determine age-related alterations of the proteome, thus highlighting the need for proteomic approaches to reveal mechanisms of aging, especially organ aging.

Dr. Alessandro Ori started to build up his research group at FLI in September 2015 with the aim to characterize the molecular mechanisms of aging using a unique combination of innovative technological approaches and advanced model systems. Currently, the group applies and develops novel approaches that use mass spectrometry to study protein interactions, stability, organelle composition and different types of post-translation modification in the context of aging. In his relatively short career, Dr. Alessandro Ori has made important contributions to the fields of structural biology, systems biology and aging research. He has now been honored for his outstanding scientific achievements with the Beutenberg Campus Award as best young researcher.

Alessandro Ori obtained his master degree in Biotechnology at the Università degli Studi di Bologna in Italy. During his studies he did a research placement at the Université Paris 7-D.Diderot in France. He obtained his PhD in Biochemistry of the University of Liverpool in 2010. He then worked as postdoc in the “Structural and Computational Biology Unit” at the European Molecular Biology Laboratory (EMBL) in Heidelberg, Germany, supported by scholarships of the Alexander von Humboldt Foundation and the EU Marie Curie Actions. Alessandro Ori has been junior group leader at the Leibniz Institute on Aging – Fritz Lipmann Institute (FLI) in Jena since September 2015. His research group “Aging of Protein Complexes” analyzes the influence of aging and environmental factors on organs on a molecular level. The group’s goal is to identify, in an unbiased way, functionally relevant alterations of the proteome that will enable the researchers to understand the mechanisms of organ deterioration that impact on healthy lifespan. 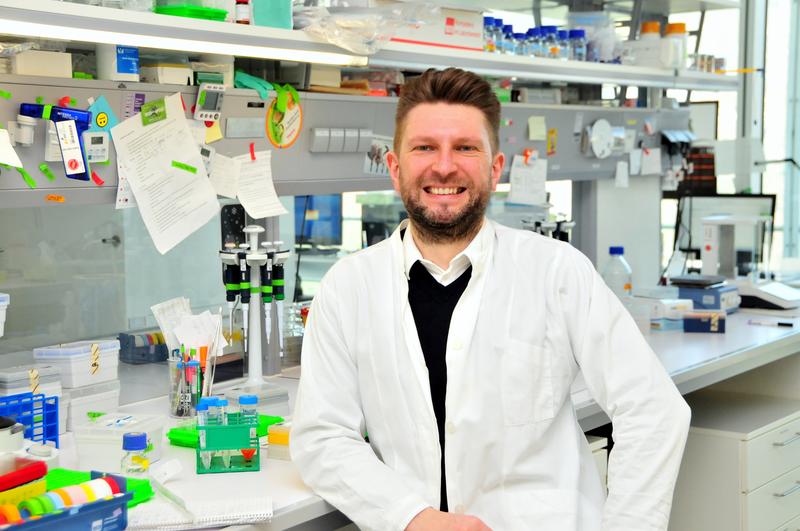 Dr. Alessandro Ori together with Prof. Dr. Peter Zipfel, chairman of the board of the Beutenberg Campus Jena e.V., during the award ceremony on May 16, 2019. 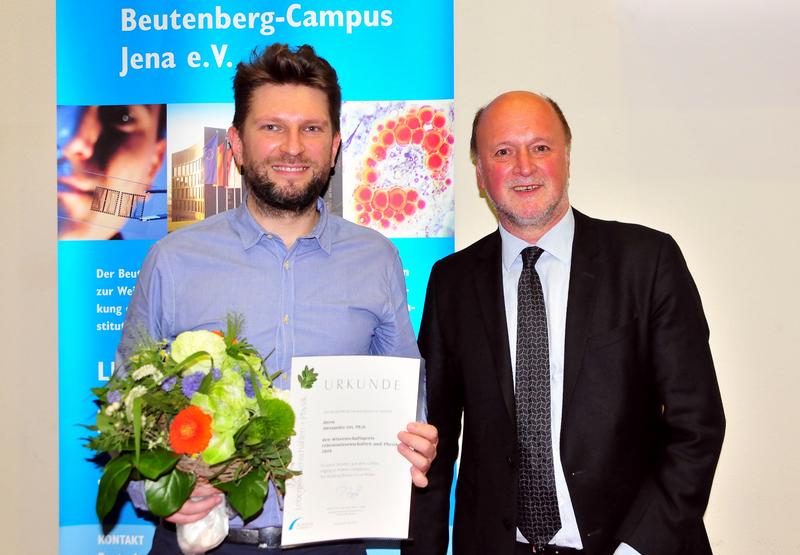