Chemistry of the cosmological dark ages studied in the lab
Advanced Search ?

Chemistry of the cosmological dark ages studied in the lab

Physicists report the first laboratory measurements of electron reactions with helium hydride ions in the cryogenic storage ring CSR at the Max Planck Institute for Nuclear Physics in Heidelberg. At temperatures down to 6 K, the reaction rates destroying the molecule were found to be significantly lower, compared to previous measurements at room temperature. This translates into a strongly enhanced abundance of this primordial molecule acting as a coolant for first star and galaxy formation in the early universe. [Science, 18 July 2019]

Just three minutes after the Big Bang the chemical composition of the universe was settled: 75% hydrogen, 25% helium and traces of lithium – created by primordial nucleosynthesis. However, in this early state all matter was fully ionised consisting of free bare nuclei and a hot electron gas, a “foggy” plasma for the cosmological background radiation. About 400,000 years later, the expanding universe cooled down to a level where electrons and nuclei started to combine to neutral atoms. It became transparent but there no stars were born yet and, thus, this era is called the “dark ages”. As the temperature dropped further, collisions of neutral helium with still abundant free protons formed the first molecule: the helium hydride ion (HeH⁺) which marks the dawn of chemistry. HeH+ and other early molecular species played an essential role in cooling primordial gas clouds via infrared emission, a necessary step for star formation. The understanding and modelling of the latter processes require a detailed knowledge of abundances and reaction rates of the relevant molecules. However, information is up to now rather limited, particularly in the low-temperature regime (< 100 K) of the late dark ages when the first stars formed, about 300 Million years after the Big Bang. Very recently, HeH⁺ was first discovered in our galaxy by detecting its far-infrared emission [1].

The abundance of HeH⁺ is critically determined by destructive reactions. At low temperatures, this is dominated by so-called dissociative recombination (DR) with free electrons: once neutralised by an electron capture, helium hydride dissociates into helium and hydrogen atoms. Previous results available in data tables for the reaction rates were based on laboratory experiments at room temperature. Under these conditions, the molecules are in rather highly excited rotational states that were suspected to influence the electron capture processes.

In order to get a better insight into the low-temperature behaviour, physicists from the division of Klaus Blaum at the Heidelberg Max Planck Institute for Nuclear Physics (MPIK) [2] investigated collisions of HeH⁺ with electrons at the institute’s cryogenic storage ring CSR. This worldwide unique machine was designed and built for laboratory astrophysics under space-like conditions regarding temperature and density [3]. The CSR provides an environment of temperatures below 10 K and an excellent vacuum (observed down to < 10⁻¹⁴ mbar). The recombination is studied using an electron target where the stored ion beam is immersed in a co-propagating electron beam over a distance of about 1 m (Figure 1). The relative velocities can be tuned down to zero which provides access to very low collision energies. The reaction products from the electron-ion interaction zone are detected downstream thus providing absolute reaction rates (Figure 1).

At a temperature of 6 K inside the CSR, the scientists observed the stored HeH⁺ ions to cool down to the rotational ground state within a few tens of seconds. During this radiative cooling process, they can follow the population of the individual rotational states and extract the state-selective DR probability (Figure 2).

“We find the electron recombination rates for the lowest rotational levels of HeH⁺ to be up to a factor of 80 below the values given in the data tables so far”, says Oldřich Novotný, principal investigator of the experiment. “This dramatic decrease is largely due to the lower temperatures used in our laboratory measurements. It translates in a strongly enhanced abundance of this primordial molecule in the era of first star and galaxy formation.”

The new result, now provided with unprecedented details, is of great relevance for both the understanding of the reaction itself as well as for the modelling of the early universe. For collision theory, HeH⁺ is still a challenging system. Here, the measurements help to benchmark the theory codes. The experimental DR reaction rates – now available for various electron energies and rotational states – can be translated into the environmental properties used in model calculations for the chemistry of the primordial gas. This and prospective future studies using the CSR provide broadly applicable data. Considering the imminent launch of the James Webb Space Telescope, the new capabilities of laboratory astrophysics come particularly timely since its search for the first luminous objects and galaxies after the Big Bang will benefit greatly from reliable predictions on early universe chemistry.

Artist’s view of the experiment under space-like conditions in the CSR. 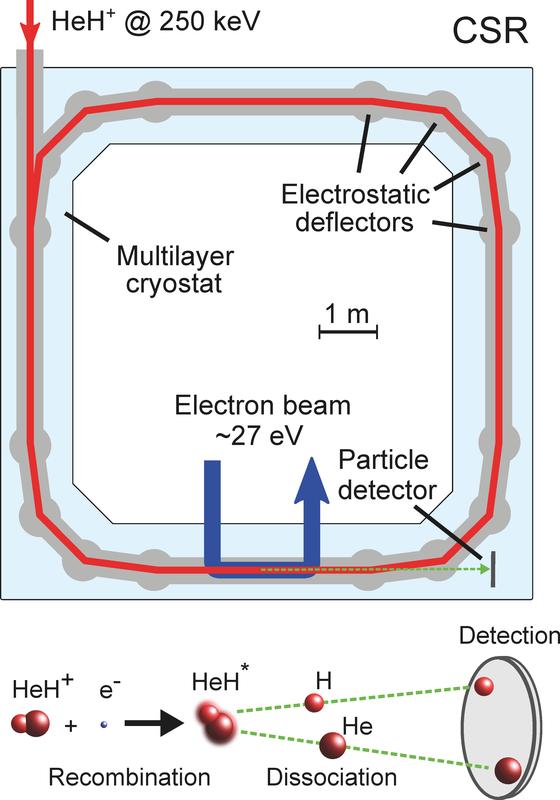 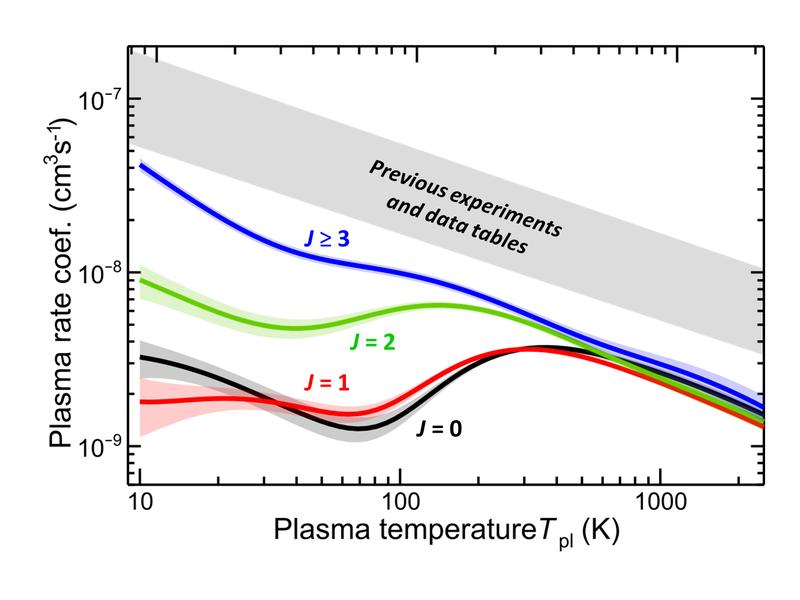