Augsburg chemists and physicists report how they have succeeded in the extremely difficult separation of hydrogen and deuterium in a gas mixture.

Thanks to the Surface Acoustic Wave (SAW) technology developed here and already widely used, the University of Augsburg is internationally recognized as the epicenter for "Nanoquakes on the Chip". At the core of this technology are sound waves induced by high-frequency signals that propagate on the surface of a chip and which are sensitive to any disturbance in their path. In a collaboration between Augsburg physicists and chemists and a theoretical colleague from Valencia, the successful development of a novel sensor has now been achieved that makes it possible to detect minute masses and mass changes in real time and to use them for isotope separation.

Researchers at the Augsburg Chairs of Experimental Physics I and Solid State Chemistry have used the “nanoquakes” or SAWs to weigh ultra-microporous nanocrystallites made of so-called MOFs (metal-organic frameworks) when they are specifically loaded with gases. The surface waves register in a very short time during their passage through these "nano-sponges" not only any mass change in the crystallites, but also their selectivity. In this way, the Augsburg scientists have been able to successfully implement and verify the difficult separation of the isotopes of a gas mixture of hydrogen (H₂) and its natural isotope deuterium (D₂, "heavy hydrogen").

The MOFs sieve, the SAWs weigh

The atomic nucleus of deuterium, in contrast to hydrogen, has an additional neutron, so the mass of D2 is about twice that of H₂, but without the size of the atoms or molecules changing significantly. If you go down to low temperatures, into the world of quanta, then it turns out that the MOF sponges preferentially saturate with D₂ at temperatures below 64 K / -209 °C. The reason for this is a quantum effect, after which this selective gas separation is also named: Under these extreme conditions, the MOFs act as a so-called "quantum sieve". The key to quantum sieving is that the diffusive behavior of gases at very low temperatures moving in a regular lattice is turned on its head: In complete contradiction to our everyday experience of sieving or filtering, the heavier particles are distributed faster in the quantum sieve than the lighter ones. And this change in the diffusive behavior can, on a specially designed chip, be detected by the SAWs not only very quickly, but also with the utmost precision.

One wave travels unhindered over the chip surface, the other through the MOF filter

As the attached graphic illustrates, two acoustic waves (nanoquakes) are generated in the center of this chip by a high-frequency signal (≈) from a central interdigital transducer. One of the two waves is sent over an uncovered, 'unsensitized' part of the chip surface, the other through the selective MOF quantum sieve (gray area in the graph). The two waves spread out at the extremely high speed of several kilometers per second to the left and right towards the two ends of the chip. The thin layer of ultra-porous, metal-organic frameworks (MOF), through which one of the waves must pass, acts as a highly selective gas filter or sponge. Below a certain temperature, due to the quantum effects described above, the selectivity of this filter for the heavier D₂ component comes into play, thereby enabling its effective separation from the H₂ component. The detection and comparison (x) with each other of the different velocities with which the quantum-sieved or filtered wave on the one hand, and the unfiltered wave on the other, arrive at the ends of the chip shows the quantum sieving in real time and with unprecedented precision.

"Inspired by these outstanding results from our joint experiments, and in particular from the fact that we have succeeded in the extremely difficult separation of H₂ and D₂ in a gas mixture, we now foresee a multitude of new, industrially and socially relevant applications," says Prof. Dr. Dirk Volkmer, the chemist in the team. "We will continue to develop and optimize our novel sensors after their baptism of fire for the real-time detection of pollutants and environmental toxins." The plan is to provide the sensors with a variety of different synthesized and functionalized MOF pixels, which can then be weighed selectively with the miniature earthquakes on the chip. Volkmer: "Medical diagnostics will be able to benefit as well from such a precise MOF@SAW analysis, for example of breathing air."

For Volkmer's physics partner, the nano-scientist and SAW pioneer Prof. Dr. Achim Wixforth, it is greatly satisfying, "that our nano-earthquakes have now finally found their way beyond nanoelectronics, nanotechnology, photonics and microfluidics into chemistry — especially since we had hardly dared hope that the combination MOF@SAW would work so well."

More about past results of SAW and MOF research at the University of Augsburg:

<
The Augsburg MOF@SAW Sensor: The different velocities, with which the MOF-filtered and unfiltered wa ...
© Universität Augsburg/IfP

The Augsburg MOF@SAW Sensor: The different velocities, with which the MOF-filtered and unfiltered waves arrive at the end of the chip, demonstrate quantum sieving in real time. 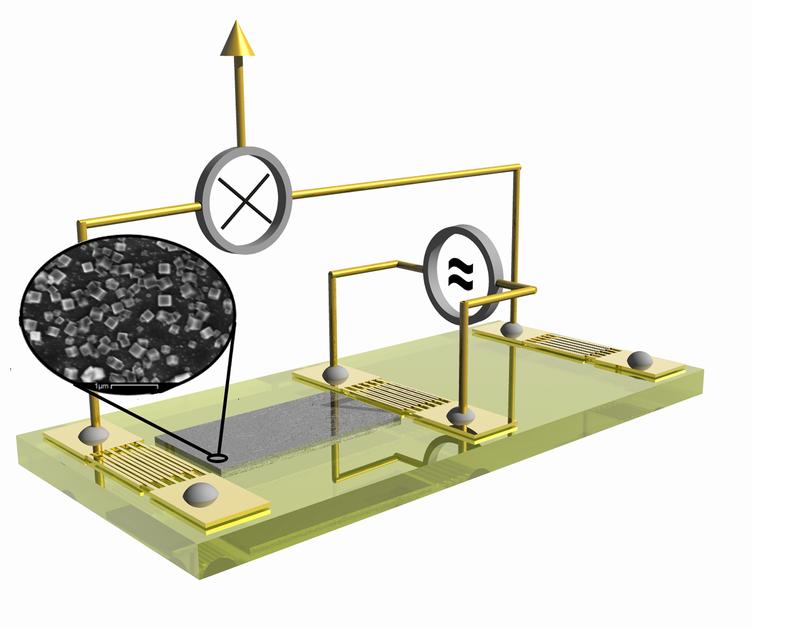