What do games such as The Settlers, Fallout: New Vegas and Frostpunk have in common? Their developers have been invited by Game Development Graz and TU Graz to give talks at the Game Dev Days Graz from 6 to 8 September.

At the fourth edition of Game Dev Days Graz this year everything revolves around game design and interdisciplinarity. More than 30 talks by the greats of the global game development scene are on the programme. The largest Austrian game developer conference will once again provide an excellent platform for the local and international gaming community to present itself and its own work, to network and exchange ideas.

The audience learns from the best

The line-up includes numerous luminaries of the industry:
Game industry veteran Noah Falstein was one of the first ten employees of Lucasfilm Games (LucasArts Entertainment) and involved as a game designer in games such as Indiana Jones and the Last Crusade. In addition, Falstein was Google’s chief game designer. He is currently active in the areas of "neurogaming" and "games with a purpose". These are computer games designed to teach skills or knowledge in an entertaining way.

The graduate biologist and computer scientist Marta Fijak, lead game designer at 11 Bit Studios, talks about the game design principles in Frostpunk. The popular strategy game is the flagship of the game development company alongside This War of Mine.

Also on hand will be Ivan Buchta, creative director at Bohemia Interactive (Arma series, DayZ), Andreas Suika of Epic Games (also well known as the creative director of the building games The Settlers and Anno), and Aleksandra Jarosz. She gained international attention for her game Fantastic Fetus, which critically examines the abortion laws in Poland.

And finally, the American developer and historian Josh Sawyer will also come to Graz. Among other things, he made a name for himself as studio design director of Obsidian Entertainment and as a designer of titles such as Fallout: New Vegas and Pillars of Eternity.

The local scene is also prominently represented. The Graz company Bongfish, the biggest Austrian company in the industry, is the main sponsor of the event this year. Klemens Strasser, student at TU Graz, presents his game Subwords, which was presented by Apple as “game of the day”.

The gaming industry as an economic factor

At the conference, the Austrian Federal Economic Chamber will for the first time present figures on the Austrian games industry, which has meanwhile become an important economic factor in the entertainment industry and has long since overtaken the music and film sectors. “We are delighted that Graz is becoming more and more well known internationally as a location for gaming development. Here, as in the whole of Austria, are many talents who are appreciated in the global community," says organizer Johanna Pirker from the Institute of Interactive Systems and Data Science at TU Graz and president of the Game Development Graz association. This year she expects some 500 participants from all over Europe to attend the event. A detailed overview as well as the continuously updated programme can be found on www.gamedevdays.com.

For the fourth edition of the Game Dev Days Graz, organizer and TU Graz researcher Johanna Pirker has once again been able to attract numerous top-class speakers to Graz. 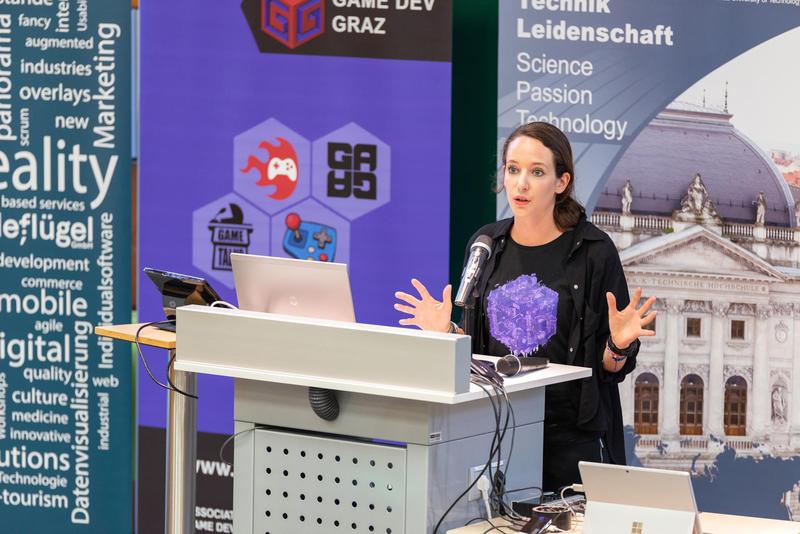