Oceans Connect: Trade and Globalization in the Indian Ocean World

From 3 to 5 October 2019 a conference with the title “Cargoes: The Materiality of Connectivity in Motion Across the Indian Ocean” will take place at the Harnack House (Ihnestraße 16-20, Berlin). The conference was organized as part of the Max Planck Fellow Group “Connectivity in Motion – Port Cities of the Indian Ocean” led by Burkhard Schnepel at the Max Planck Institute for Social Anthropology (MPI). By focusing on cargoes, the conference asks how the transport, trade, and consumption of these objects create connections between people, groups, regions, nations, and even entire continents.

Indian Ocean Studies: Globalization Did Not Start with European Modernity
Water and seafaring make it possible to transport and exchange goods, people, animals, ideas, religions, political systems, and languages. They create connections across immense distances between places that could be brought into contact only with difficulty, if at all, via land routes. “In this respect the Indian Ocean is particularly interesting,” says Burkhard Schnepel, Professor of Social Anthropology at Martin Luther University Halle-Wittenberg and Max Planck Fellow at the MPI in Halle. “The Indian Ocean has been used for transport for more than 5,000 years. Thanks to the sea routes, new connections between Africa, Asia, and Australia have been constantly created.” In contrast to traditional research in Area Studies, Schnepel’s project “Connectivity in Motion – Port Cities of the Indian Ocean” is less concerned with individual regions and places as with the movements between the port cities and the forms of connectivity within the Indian Ocean macro region that they make possible. “The interdisciplinary approach of our project and its historical perspective mean that we can show, for example, that globalization – the intercontinental exchange of people, goods, and ideas – is not a new phenomenon of the twentieth century or European modernity. The phase of so-called ‘proto-globalization’ – that is, the period from 1500 onwards – most definitely also took place in the parts of the world that are considered the Global South today. And in this context the Indian Ocean world was the most important maritime space of exchange and communication for many centuries.”

The Material Turn: Thinking about Things, or, How the Teacup Got Its Handle
The papers at the conference “Cargoes: The Materiality of Connectivity in Motion Across the Indian Ocean” will consider above all the question of what impact the material things that are transported as cargo between the ports have had on people and social relations. “We explicitly do not limit ourselves to goods that can be traded,” notes Schnepel. “We want to expand our view to analyse the symbolic exchange of gifts and non-commercial objects.” This way of looking at things helps researchers in many different disciplines to understand and explain socio-cultural, economic, religious, and political relationships. Schnepel: “Until just recently social anthropologists have concerned themselves primarily with topics like religion, rituals, or kinship relations. The everyday material things that make up people’s lives were considered of lesser importance. This has changed in the course of the so-called ‘material turn’.” Thus, it is possible to show that products like Indian textiles, Chinese porcelain, or spices have vastly different meaning and impacts in different social contexts: in their countries of origin they were often considered nothing special. But once they had made their way to the other side of the ocean, they frequently became luxury goods and their use was connected with a specific social status. Schnepel: “This close examination of material things in fact offers valuable insights into the people that create, transport, use, or possess them.” Sometimes the transport has an effect not just on the meaning of the objects, but the objects themselves: porcelain teacups from China originally did not have handles. Only after they began to be exported to Europe did their form undergo a transformation. “This is because Europeans, unlike the Chinese, prefer to drink their tea hot,” explains Schnepel.

The Dramatic Change of Modernity: Europeans and the Introduction of Violence
Conference organizers Burkhard Schnepel and Julia Verne, Professor of Anthropogeography at the University of Bonn, hope that the conference will help to spur on Indian Ocean Studies, a field that has thus far attracted little attention in Germany. Schnepel: “Our anthropological-historical approach, based on archaeological finds, archival studies, and empirical fieldwork, can greatly increase our understanding of the connections within the macroregion of the Indian Ocean. Collaborations between regional experts working from historical and contemporary perspectives have produced numerous studies on the microlevel that show how the exchange relations developed and what significance they have in the present.” Indian Ocean Studies also offer a perspective that corrects and relativizes the Eurocentric view of the world. “Long-distance trade has its roots in the Indian Ocean world, not in Europe,” Schnepel notes. “And historical studies of this macro region also show us something else: the trade relations were based principally on peaceful exchange. The exploitation of the world using military force only started in the sixteenth century with the arrival of the Europeans and their gunboats.”

Studying global social change
The Max Planck Institute for Social Anthropology is one of the world’s leading centres for research in socio-cultural anthropology. It was established in 1999 by Chris Hann and Günther Schlee, and moved to its permanent buildings at Advokatenweg 36 in Halle/Saale in 2001. Marie-Claire Foblets joined the Institute as Director of the Department ‘Law & Anthropology’ in 2012. Common to all research projects at the Max Planck Institute is the comparative analysis of social change; it is primarily in this domain that its researchers contribute to anthropological theory, though many programmes also have applied significance and political topicality. Fieldwork is an essential part of almost all projects. Some 230 researchers from over 30 countries currently work at the Institute. In addition, the Institute also hosts countless guest researchers who join in the scholarly discussions.

<
The conference "Cargoes: The Materiality of Connectivity in Motion Across the Indian Ocean" will tak ...
Graphic Design: Max Planck Institute for Social Anthropology

The conference "Cargoes: The Materiality of Connectivity in Motion Across the Indian Ocean" will take place from 3 to 5 October 2019 at the Harnack House (Ihnestraße 16-20, Berlin). 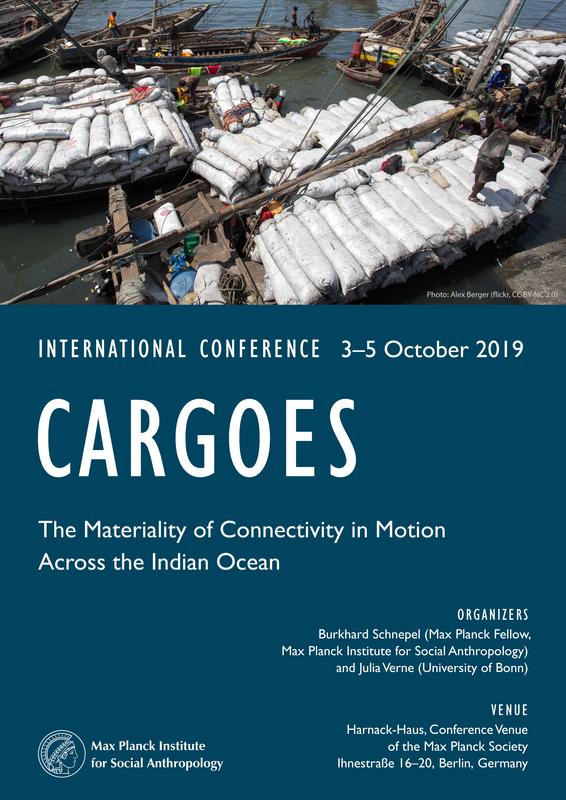