By applying a novel method, biologists at TU Dresden have successfully analysed the metabolism of intact tissues of the fruit fly using a label-free microscopy technique. They used the natural fluorescence of certain metabolic molecules and found that sperm, compared to other tissues, are highly glycolytic.

How do female insects manage to keep the sperm fresh for months after mating? This is a central question of the sperm biologists of the Chair of Applied Zoology headed by Prof. Dr. Klaus Reinhardt. Now the scientists presented their first promising results in the journal Scientific Reports.
Dr. Cornelia Wetzker borrowed an innovative label-free technique from cancer research in order to investigate the metabolism of living biological tissues. This involves the measurement of the decay of the intrinsic fluorescence of the metabolic coenzyme NADH – a matter of nanoseconds, requiring a specialised microscope. This measure, also known as fluorescence lifetime, serves as a cell-specific signature and characterises the specific metabolic pathways of the tissue. Cancer cells have a shorter NADH fluorescence lifetime, are thus more glycolytic and can therefore be distinguished from healthy cells.
With this method, Dr. Cornelia Wetzker has now succeeded in examining the metabolism of intact tissues of the fruit fly outside the body. She analysed the metabolism of sperm in the storage organs of male and female animals as well as other tissues of the insect. The sperm were investigated in still intact closed organs, which in the male serve for storage before and in the females after mating. The team thus found that the sperm had a highly glycolytic metabolism similar to that of cancer cells. Other cells, such as intestinal, gland and fat cells, were in a much more oxidative state.
Using this method, the biologists found a first clue to their initial question of how the sperm remain fresh in the body of the insect females. They discovered that the fluorescence lifetime of another autofluorescent metabolic coenzyme called FAD differs between the sperm in the male and in the female body.
With regard to the clinical application of this technique, fluorescence lifetime imaging microscopy (FLIM) is proving to be highly promising. "The fluorescence lifetime signature analysis could even be automated with the help of neural networks", suspects Dr. Cornelia Wetzker. "And since the method is not dangerous, there is no reason why it should not be used on living humans or animals," adds Professor Klaus Reinhardt. 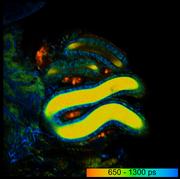 <
False-colour image of the fluorescence lifetime of the metabolic coenzyme NADH in sperm mass (here i ...
Cornelia Wetzker

False-colour image of the fluorescence lifetime of the metabolic coenzyme NADH in sperm mass (here in yellow) in a female sperm storage organ in the fruit fly. 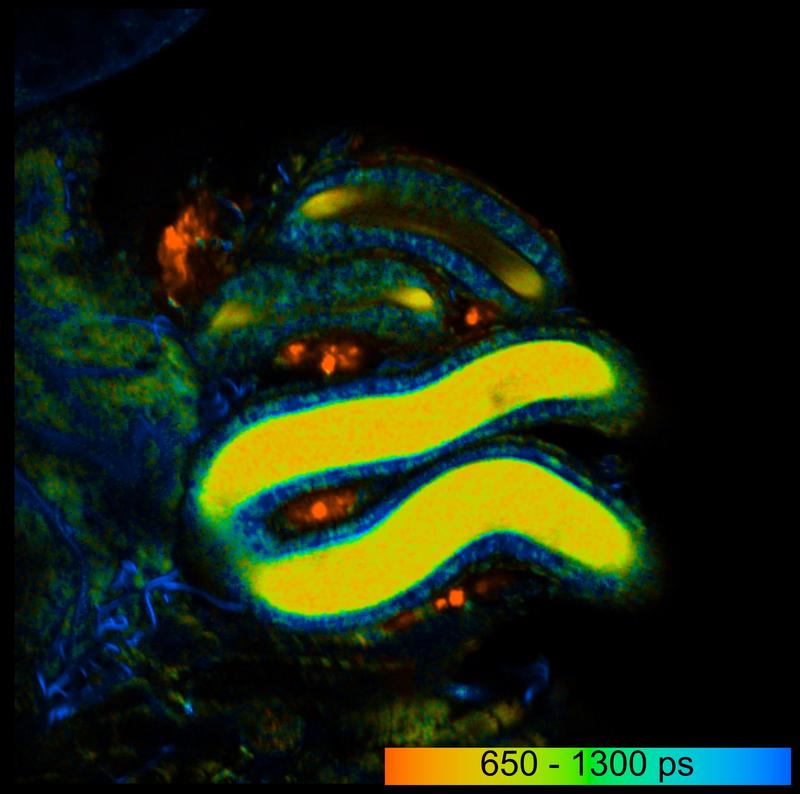