A team headed by Prof. Dr. Frank Stienkemeier and Dr. Lukas Bruder from the Institute of Physics at the University of Freiburg has succeeded in observing in real-time ultrafast quantum interferences — in other words the oscillation patterns — of electrons which are found in the atomic shells of rare gas atoms. They managed to observe oscillations with a period of about 150 attoseconds — an attosecond is a billionth of a billionth of a second.

To this end, the scientists excited rare gas atoms with specially prepared laser pulses. Then they tracked the response of the atoms with a new measurement technique that enabled them to study quantum mechanical effects in atoms and molecules at extremely high time resolution. The researchers present their results in the latest edition of Nature Communications.

Numerous chemical reactions, such as the breaking of bonds in molecules, are triggered by the absorption of light. In the first instant after the absorption, the distribution of the electrons in the atomic shell changes, significantly influencing the subsequent course of the reaction. This alteration happens extremely quickly; the timescales reach into the attosecond range. Previously-used spectroscopic technologies, which use visible laser pulses, are not fast enough to track such processes. So researchers around the world are currently developing innovative laser sources and adequate spectroscopic technologies in the ultra-violet and X-ray ranges.

Stienkemeier’s team has extended a technology known from the visible spectrum range, coherent pump-probe spectroscopy, into the ultra-violet range. This is the spectral range between X-ray radiation and ultra-violet light. To do this, the scientists prepared a sequence of two ultra-short laser pulses in the extreme ultra-violet range at the FERMI free electron laser in Trieste, Italy. The pulses were separated by a precisely-defined time interval and had a precisely-defined phase relationship to one another. The first pulse starts the process in the electron shell (pump-process). The second pulse probes the status of the electron shell at a later point (probe-process). By altering the time interval and the phase relationship, the researchers could reach conclusions on the temporal development in the electron shell. “The greatest challenge was to achieve precise control over the pulse properties and to isolate the weak signals,” explains Andreas Wituschek, who was in charge of the experimental procedure.

The Freiburg physicists studied the rare gas argon, amongst others. In argon the pump-pulse causes a special configuration of two electrons within the atomic shell: this configuration disintegrates, with one electron leaving the atom in a very short time and the atom finally remaining behind as an ion. The researchers succeeded for the first time in observing the immediate temporal decay of the quantum interference, as one electron left the atom. “This experiment paves the way for many new applications in the study of atomic and molecular processes after selective stimulation with high-energy radiation in the extreme ultra-violet range,” says Bruder.

The research project was funded within the framework of the International Graduate School CoCo, which was established by the German Research Foundation (DFG), as well as by the COCONIS project of the European Research Council (ERC) and LoKoFEL project of the Federal Ministry of Education and Research (BMBF). 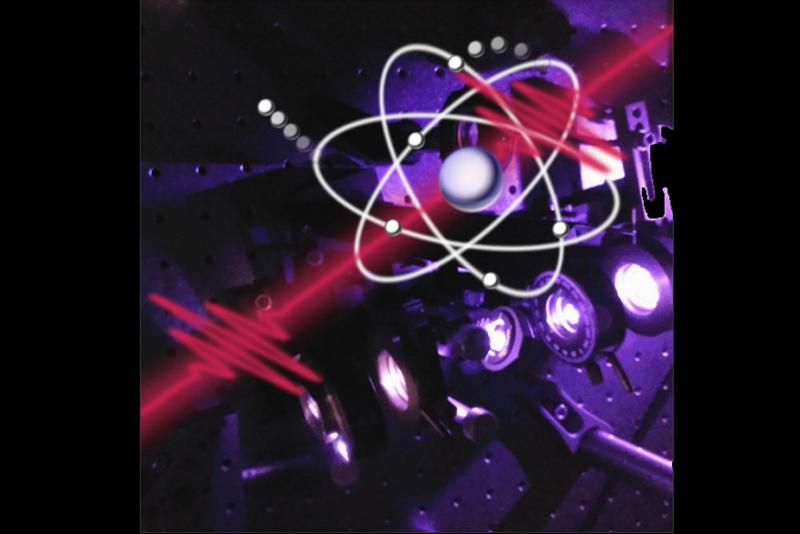