International research team gets to the root of infection

Jena. The bite of a spider caused a severe inflammatory response and cost an Australian woman her forearm. Scientists were able to isolate a fungus from the infected forearm tissue of the patient. This tragic infection has now helped an international team of researchers find new active compounds, the so-called necroximes. These substances are produced by bacteria that live inside the fungi. The highly effective cytotoxins may provide clues for the development of new cancer drugs. The researchers published their results in the journal Angewandte Chemie.

Numerous wild animals in Australia, including many spiders, are particularly poisonous. A team led by Christian Hertweck from the Leibniz Institute for Natural Product Research and Infection Biology – Hans Knöll Institute – (Leibniz-HKI) in Jena, has been investigating an unusual case together with Australian colleagues: In the 1980s a spider bit an Australian woman's finger. A mixed infection developed in the forearm, which physicians could only stop by amputation. Researchers isolated the fungus Rhizopus microsporus from the dead, necrotic tissue. Surprisingly, Hertweck and his colleagues discovered that bacteria live inside the cells of this fungus. According to the analyses of the researchers in Jena, the bacteria are the ones who produce a whole cocktail of toxins. A part of this mixture, the so-called rhizoxins, was discovered at the Leibniz-HKI several years ago. Now, new molecules with a completely different structure, the so-called necroximes, have been added to the mix. They belong to the substance class of benzene lactone enamides. Even the smallest amounts of these necroximes will cause human cells to die.

The team also investigated how the bacteria produce these unusual compounds by analyzing the genome of the bacteria. Using bioinformatic analyses, they decoded a large number of biosynthesis genes and found that they encode a kind of molecular assembly line on which the necroximes are formed. Small molecular building blocks are assembled and modified using a biochemical program. Each individual domain of the enzymatic assembly line is responsible for a specific reaction step until the finished molecule is finally released. Since necroximes and related substances have a toxic effect on human cells, they are potential drugs for the treatment of cancer. However, chemists often have to adapt the molecular structure in order to improve the pharmacological properties and minimize undesired effects. Biosynthesis enzymes are a suitable tool provided by nature for scientists to achieve this. By decoding the responsible genes, natural product researchers are now able to reprogram the biosynthesis of active compounds in a targeted manner. In addition, they found similar genetic codes in the genomes of numerous other bacteria, which they thus identified as producers of natural products.

For Christian Hertweck, who also holds a chair at the Friedrich Schiller University Jena, partnerships occurring between different organisms in nature are a source of scientific inspiration: "The complex coexistence of different organisms – in this case bacteria, fungi and spiders – is largely controlled by chemical substances. With necroximes, we have discovered new toxic natural products that could potentially be beneficial for humans.” The researchers in Jena are pursuing this approach in a specific research focus. For example, Hertweck and many colleagues in the Collaborative Research Centre ChemBioSys are working on the chemical language in communities of organisms. In the Cluster of Excellence Balance of the Microverse, scientists are further investigating the molecular interactions of microorganisms with other living organisms and the environment. Such findings are of medical interest, but can also help to understand and influence environmental processes. 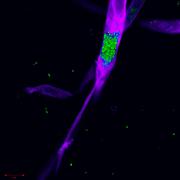 <
Microscopic visualization of bacteria inside the fungus
Leibniz-HKI
None

Microscopic visualization of bacteria inside the fungus 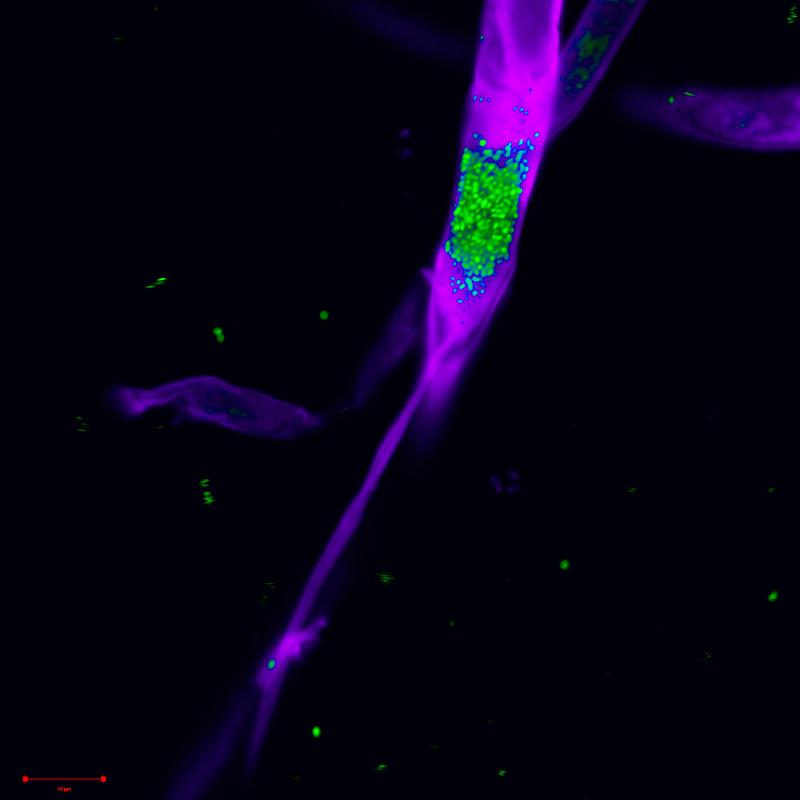