University of Tübingen researchers illuminate the relationship between vegetation, precipitation and soil erosion in the Andes

Plants may stabilize slopes, yet rainfall often intensifies soil erosion. Until now, just how these two things interact to form mountain topography was only clear for a few small regions on Earth. In a new study, Professor Todd Ehlers, Dr. Jessica Starke and Dr. Mirjam Schaller of the Geosciences department at the University of Tübingen, Germany, investigated how plants and climate shape topography. They did this in a large study of the 3,500 kilometer long western edge of the Andes Mountains in Peru and Chile. They found that the question of how plants influence the landscape and erosion can have different answers, depending on what area is investigated. Key factors identified are the climate zone and plant cover. In the dry Atacama Desert, for example, sparse vegetation is sufficient to hold the soil in place; while higher erosion rates can be seen in the wetter and more temperate regions where plant cover is denser. The study has been published in the latest edition of the journal Science.

The area of the Andes investigated extends almost the entire length of South America, from 6 to 36 degrees south latitude. This region covers six climate zones, from very dry to temperate. “Along the western edge of the Andes, many individual studies have determined the rates of soil erosion over the past million years,” says Todd Ehlers. “Yet the results were inconsistent and could not be easily explained.” To evaluate the rate of erosion, the researchers used what’s known as cosmogenic nuclides, which are produced on the Earth’s surface by cosmic rays from space. The nuclides accumulate only when the ground is exposed. Using the concentration of the isotopes from sediments in 86 rivers, the researchers could calculate how fast the mountains eroded. “We supplemented earlier results from 74 study sites in Peru and Chile with 12 new measurements to fill the gaps," says Ehlers. This enabled him and his team to study changes in mountain erosion in different vegetation and climate zones along the Andes. The erosion rates varied between 1.4 meters to 150 meters per million years.

Plants use their roots to hold the soil onto slopes and slow down water flowing over the surface, thereby stabilizing slopes. But, plants can also enhance erosion by using their roots to break down rocks into soil that is more easily erodible. However, the situation becomes more complex when rainfall is taken into account. Rainfall is important for vegetation, but is also a key driver for soil erosion. “You might think that the denser the plant cover, the less erosion there would be. This simple correlation is correct for some regions of the Andes” Ehlers says. “However, other factors such as the rate of rainfall also play an important role. It’s exciting to now see how mountain erosion reflects this interaction between plants and rainfall.” For example, in the temperate Andean regions there is dense plant cover due to heavy rainfall. This rainfall is high enough that it increases soil erosion, despite the presence of dense vegetation. However, in regions with even denser vegetation than temperate areas, plants are able to outpace the effects of rainfall on erosion and slopes are stabilized, and steeper.

“Our large-scale investigation across this broad climate and vegetation gradient in the Andes helps us to better understand the observations from many other studies,” Ehlers explains. “Previous studies were mostly conducted in geographic regions restricted in terms of their environment or climate. It's only when working with a large region that you see the big picture of how plants and climate interact with landscapes.” Vegetation forms a link between the biosphere and the Earth's surface. “Our study is an example of a new scientific frontier where the Earth and life sciences meet. We are learning more and more about how strongly the solid and living parts of the Earth interact, and we can observe the effects of these interactions over long time scales of thousands of years,” says Ehlers.

Temperate Araucaria forest of south-central Chile: Although the dense vegetation cover in this setting can limit erosion, the rainfall required to sustain plants is intense and promotes erosion. 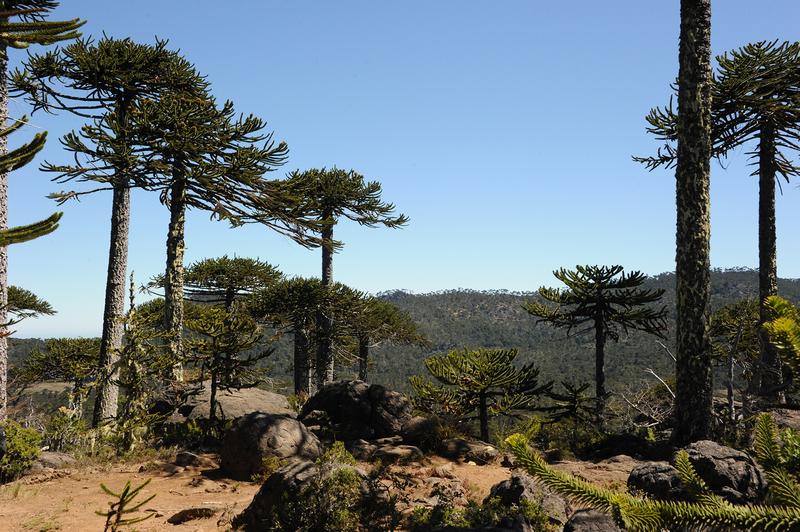