How the microbiome is involved in the development of cancer
Advanced Search ?

Home > Press release: How the microbiome is involved in the ...

How the microbiome is involved in the development of cancer

Despite significant advances in prevention and treatment of cancer, year after year there is a steady increase in the number of deaths caused by malignancy. In industrialised nations, one in every two or three people develops a form of cancer during the course of their life, and the trend is rising. For a long time, certain pathogens, in particular viruses and bacteria, have been considered as potential causes of cancer. Three viruses and one bacterium are recognized as risk factors: the human papillomavirus, the human hepatitis viruses B and C, as well as the bacterium Helicobacter pylori usually found in the stomach. But in addition to these well-known pathogens, does a healthy microbiome, i.e. the entirety and balance of microorganisms in the body, also play a role in the development of cancer?

A research team led by Professor Thomas Bosch at Kiel University has demonstrated, using the simple freshwater polyp Hydra as an experimental model, that after an environmental disruption of the normal bacterial community, the tissue of a host organism may be colonised by bacteria from the environment. The contact with already-present microbes then leads to the production of bacterial factors that have a damaging effect on the Hydra cell structures, and ultimately trigger tumour formation. The Kiel team published their research results, which were achieved in frame of the Collaborative Research Centre (CRC) 1182 "Origin and Function of Metaorganisms" at Kiel University, today in the renowned scientific journal PLOS Pathogens.

The research team was prompted to use the evolutionary approach to cancer by their previous findings from work on the origins of cancer during the evolutionary history of life. Several years ago, the researchers already used the freshwater polyp Hydra, a phylogenetically ancient multicellular organism, to demonstrate that in principle all multicellular animals can form tumours. "We believe that cancer is a legacy of transition to multicellularity early in the evolution of life,” emphasised Dr Alexander Klimovich, a researcher in the field of Cell and Developmental Biology at Kiel University and leader of the study. “Since all multicellular organisms also possess a microbiome, and have evolved together with their microbial symbionts over millions of years, it is logical to hypothesize that the microorganisms are also involved in the development of cancer," continued Klimovich.

In laboratory experiments, the doctoral researcher Kai Rathje, a member of the research team, has now been able demonstrate such a causal involvement of individual bacterial species and their interactions within the microbiome in cnidarians. "Hydra develop cancer if a specific type of foreign bacteria from the phylum Spirochaetes becomes increasingly prevalent in the microbiome, and thereby disrupts the balance of the bacterial colonisation in their tissue," emphasised Klimovich. "Interestingly, these bacteria exert their harmful influence only in the presence of certain other bacteria from the genus Pseudomonas, which are part of the normal composition of the microbiome," Klimovich continued.

Thus, the interaction of microbes with each other is involved in tumour formation in cnidarians, and the initial impulse also comes from the influence of the environment: the organisms initially acquire the harmful spirochaetes from the surrounding water. However, the invading bacteria successfully colonise the host tissue only if the Hydra tissue has already been weakened by changing factors in the environment. These factors include a change in temperature, and the resulting change in microbial colonisation. The researchers were able to prove experimentally that spirochaetes and Pseudomonas bacteria from the natural microbiome interact with each other, and thereby both change their behaviour dramatically. When they encounter each other, the bacteria modify their movement patterns and seek direct contact with one another. As a result, they also begin to express different genetic information and thereby in particular activate factors which have a pathogenic effect for the host organism. Due to these changes, the microbial balance in the tissue of the cnidarians becomes disrupted, which is followed by structural changes in the cells and ultimately to tumour formation. How these interactions occur at the molecular level, and which specific biochemical mechanisms are involved in this form of cancer development, are the subject of currently ongoing investigations.

The microbiome - gateway and protective barrier at the same time

"Our novel findings point to a universal principle which will expand our understanding of the pathogenesis of cancer - namely, as a comprehensive interaction of genetic and environmental factors, including specific microbial influences," emphasised Professor Thomas Bosch, head of cell and developmental biology at Kiel University and spokesperson for the CRC 1182. "The new research findings show that an important aspect in the pathogenesis of cancer can be found in the context of microbial interactions - it was only the common presence of certain bacteria interacting with each other within a disturbed microbiome that enabled the formation of tumours in the case we investigated. Therefore, in many cases, it is probably not a single malicious intruder, but the malfunction of the microbiome as a protective barrier for the body as a whole what can promote the development of cancer," added Bosch.

These findings offer a promising perspective because the protective function of the microbiome could possibly be used in future: "The microbial colonisation of the body normally balances out and protects the organism against harmful influences, potentially even against carcinogenic influences," said Bosch. "Future research will show whether this ability of the microbiome to maintain a healthy barrier which protects the body from colonisation by harmful microorganisms may also be used for the prevention of cancer," continued Bosch. In the future, there could be targeted interventions in the composition of the microbiome. Such manipulations could potentially hinder the establishment of certain cancer-promoting bacterial communities, and thus restore the healthy balance of the microbiome. However, more extensive fundamental research is required before such preventive measures or treatments can be implemented.

https://www.uni-kiel.de/de/pressemitteilungen/2020/080-rathje-plospathogens-auth...
Caption: Professor Thomas Bosch (left) and Dr Alexander Klimovich from the Cell and Developmental Biology group at Kiel University investigated the role of the microbiome in the development of cancer.
© Christian Urban, Kiel University

https://www.uni-kiel.de/de/pressemitteilungen/2020/080-rathje-plospathogens-hydr...
Caption: The freshwater polyp Hydra (shown in life-size) develops cancer if a specific type of bacteria becomes increasingly prevalent in the microbiome, and thereby disrupts the balance of the bacterial colonisation.
© Kiel Life Science

About the CRC 1182:
The Collaborative Research Centre "Origin and Function of Metaorganisms" is an interdisciplinary network with the participation of around 80 researchers, which investigates the interactions of specific microbial communities with multicellular host organisms. It is funded by the German Research Foundation (DFG), and tackles the issue of how plants and animals, including humans, form functional units (metaorganisms) together with highly specific microbial communities. The aim of the CRC 1182 is to understand why and how microbial communities enter into these long lasting connections with their hosts, and what functional consequences these interactions have. The CRC 1182 comprises scientists from five faculties at Kiel University (CAU), from the GEOMAR Helmholtz Centre for Ocean Research Kiel, the Max Planck Institute for Evolutionary Biology in Plön, the Heinrich Heine University Düsseldorf, the Leibniz Institute for Science and Mathematics Education and the Muthesius University of Fine Arts and Design in Kiel.

The freshwater polyp Hydra develops cancer if a specific type of bacteria becomes increasingly prevalent in the microbiome, and thereby disrupts the balance of the bacterial colonisation.

Colonization of a healthy Hydra oligactis polyp (left) by an environmental bacterium from the phylum Spirochaetes induces the growth of conspicuous tumorous bulges in the polyp (right). 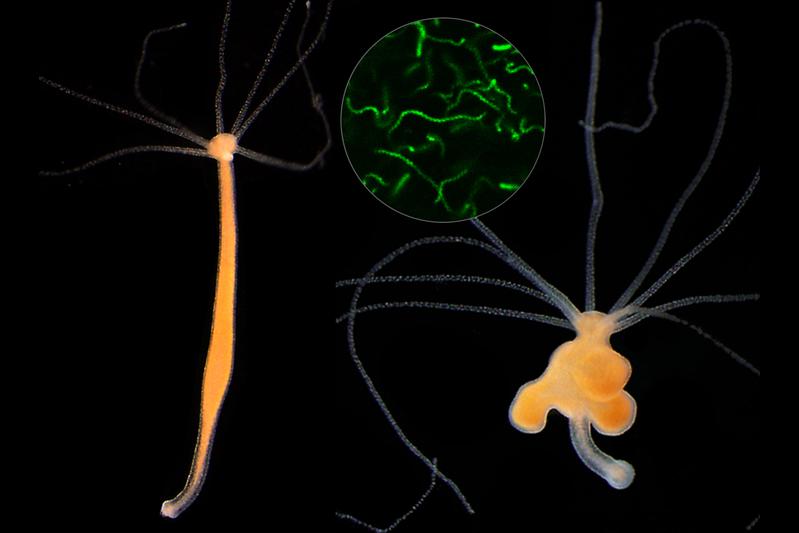 Professor Thomas Bosch (left) and Dr Alexander Klimovich from the Cell and Developmental Biology group at Kiel University investigated the role of the microbiome in the development of cancer. 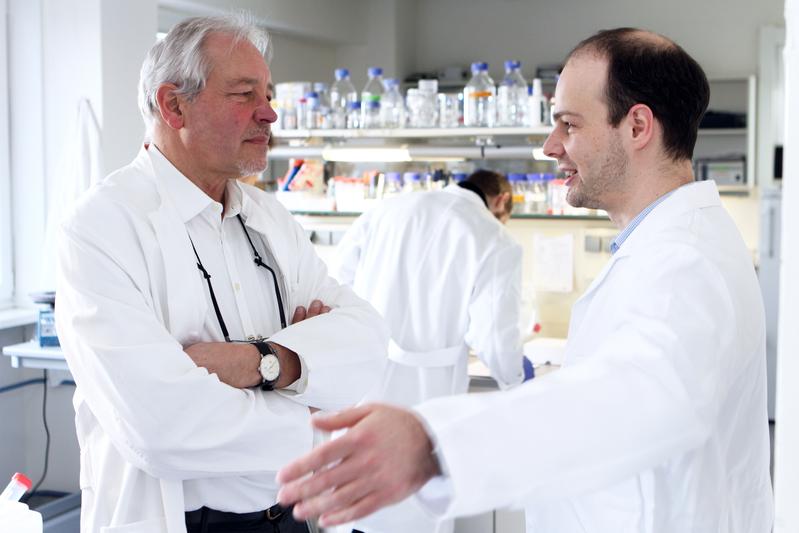