Sturgeons lived on earth already 300 million years ago and yet their external appearance seems to have undergone very little change. A team of researchers from Würzburg and Berlin has now succeeded in sequencing their genome, delivering a missing piece of the puzzle essential to understanding the ancestry of vertebrates.

Sometimes referred to as the "the Methuselah of freshwater fish", sturgeons and their close relatives are very old from an evolutionary point of view. Fossils indicate that sturgeons date back 250 million years and have changed very little during this period, at least as far as their external appearance is concerned. So it is not surprising that already Charles Darwin coined the term "living fossils" for them.

Scientists from the University of Würzburg and the Leibniz Institute of Freshwater Ecology and Inland Fisheries (IGB) with colleagues in Constance, France and Russia have now successfully sequenced the genome of the sterlet (Acipenser ruthenus), a relatively small species of sturgeon. They were able to show that the genetic material, too, has changed very little since the heyday of the dinosaurs. The scientists present the results of their work in the latest issue of the journal Nature Ecology and Evolution.

Ancestors of the vertebrates

"Sturgeon genomes are an important piece of the puzzle that helps us understand the ancestry of vertebrates. And this has been missing until now," Professor Manfred Schartl explains the reasons why scientists are interested in this fish species. Schartl is the lead author of the recently published study and is senior professor at the Chair of Developmental Biochemistry at the University of Würzburg since this year. Sturgeons are among the oldest species on earth in terms of evolutionary history. They are the ancestors of more than 30,000 species of bony fish that occur today – and thus of more than 96 percent of all living fish species and about half of all known vertebrate species.

Schartl and his colleagues were able to show that sturgeons branched off onto their own evolutionary path at some point during the Upper Devonian or Carboniferous Period about 345 million years ago. "Their external appearance has changed very little since that time and this is also evident in their genetic material, the DNA," Dr. Du Kang explains; first author of the study and a research assistant at the Department of Biochemistry and Molecular Biology II at the University of Würzburg.

To verify this, the geneticists had to take a close look at the proteins encoded by the genes of the sterlet. And indeed, their calculations reveal that this so-called protein evolution has proceeded at a very slow pace. "The rate of protein evolution of the sterlet is similar to that of the coelacanth or of sharks – two fish species that have been roaming the oceans almost unchanged for more than 300 million years as well," says Dr. Matthias Stöck, an evolutionary biologist at the IGB.

The sequence analysis revealed that the sterlet genome comprises 120 chromosomes, about 47,500 protein-coding genes and 1.8 billion base pairs. The researchers also showed that the sterlet duplicated its genome some 180 million years ago, leaving the species instead of the regular two with four sets of chromosomes, which is called tetraploidy in scientific jargon. The genome duplication does not come as a surprise: "Such processes have repeatedly had a major impact on the evolution of the vertebrate genome," says Manfred Schartl. Already their ancestors underwent "whole genome duplication" twice in their evolutionary history. Some species went through this process as many as three or four times.

What did surprise the scientists though was the fact that this duplication of the genome happened so far back in the long history of the sturgeon. "Over this long time span, we would have expected the genome to change more profoundly because in tetraploid organisms gene segments are often lost, silenced or acquire a new function over time," says Professor Axel Meyer, an evolutionary biologist at the University of Constance.

The exact genomic state of sturgeons was long controversial among scientists. While considered polyploid by some, which means that the genome was duplicated multiple times, others interpreted the sturgeon as a "functional diploid", which refers to a species that first duplicated its genome to become tetraploid but then reduces the gene content again as it evolves. Although the chromosomes are still present in two pairs, they divide their tasks among themselves.

Now it's clear: "We have found out that the sterlet has not returned to a diploid state. Instead, it has retained an unexpectedly high degree of structural and functional polyploidy," says Manfred Schartl. This retention can be ascribed to the slow pace of molecular evolution of most fractions of the sterlet genome.

Genome duplication: A layperson might assume that this makes the job easier for scientists because everything is available in duplicate. But in fact, this presents researchers with a major technical challenge. "This has made it extremely difficult to assemble and assign the small 'snippets of DNA' that modern genome sequencing methods provide us with," says Schartl. However, using special procedures we were able to create "a very good reference genome and the first ever genome of an ancient fish" as part of an international research collaboration.

Gene sequencing is an important basis for protecting sturgeon species. "In the future, we will be able to determine the sex of the animals using genetic analyses which will greatly facilitate breeding. This will allow us to control reproduction and support the management of breeding populations. This is a milestone in our efforts to preserve these ancient species", says Dr. Jörn Gessner, the IGB's sturgeon expert.

Sturgeons are native to subtropical, temperate and sub-Arctic rivers, lakes and coastlines of Eurasia and North America. Sturgeons are long-lived and reproduce late, typically not before the age of ten. In many sturgeon species, the adult fish repeatedly migrate from the sea into freshwater to spawn. They are highly sought after for their eggs – better known as caviar.

Because of habitat destruction, river fragmentation, marine pollution and 2,000 years of caviar production, most sturgeon species are now on the brink of extinction. Due to a ban on wild caviar trade, sturgeon aquaculture has become an important industry which can contribute to protecting wild populations by securing the market supply.

<
The Sterlet (Acipenser ruthenus) belongs to the sturgeons. Its genome is an important piece of the ...
Photo: Andreas Hartl

The Sterlet (Acipenser ruthenus) belongs to the sturgeons. Its genome is an important piece of the puzzle in understanding the ancestry of vertebrates. 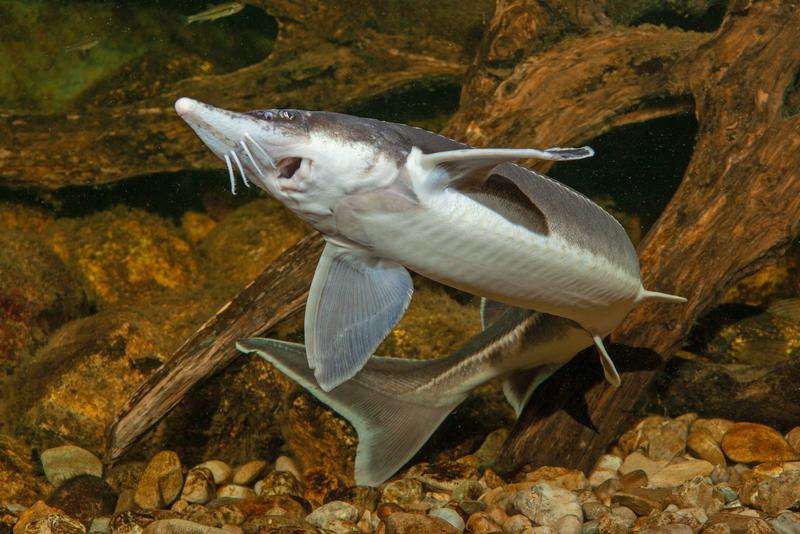