IGB researcher Sonja Jähnig was a successful candidate of the Leibniz Programme for Women Professors, and has now been jointly appointed Professor of Aquatic Ecogeography by the Leibniz-Institute of Freshwater Ecology and Inland Fisheries (IGB) and Humboldt-Universität zu Berlin.

Within the support provided by the Leibniz Programme for Women Professors, Sonja Jähnig will explore freshwater megafauna such as sturgeons, beavers and river dolphins, as well as the impact of megafauna loss on the stability and functioning of freshwater ecosystems. She also investigates society’s perception of these species, and how the insights gained can be used for nature conservation schemes.

The Leibniz Programme for Women Professors is aimed at top women scientists in all disciplines with an outstanding international track record. Besides having a strong international network, Jähnig has a reputation as an excellent scientist within the field of limnology.

Together with her research group at IGB, Jähnig has been exploring global change effects on river ecosystems as well as large-scale distribution patterns of biodiversity, i.e. the diversity of species, ecosystems and ecological functions, in freshwaters since 2014.
Sonja Jähnig is – besides many other activities – co-founder of the Alliance for Freshwater Life, a network in which scientists, conservation professionals and policy experts aim to combine their expertise to push the biodiversity crisis on the political and social agenda. In keeping with this goal, the Living Waters research agenda for the biodiversity of inland and coastal waters was drafted under her leadership and presented to the German Federal Ministry of Education and Research in spring 2019. She also joined forces with other European freshwater research institutions to help develop and establish the Freshwater Information Platform. This portal brings together results of freshwater ecosystem research, and offers for example free access to data and maps.

The joint professorship in Aquatic Ecogeography complements, in terms of methodologies and thematic scope, the Biogeography lab led by Professor Tobias Kümmerle, who focuses on terrestrial systems in rural areas as well as on nature conservation issues. Both chairs are established in the Geography Department of the Humboldt-Universität zu Berlin, presenting promising potential for synergies concerning integrated science at landscape scale and future-oriented cooperative research at the intersection of geography and ecology.

Sonja Jähnig about her professorship

“Freshwaters are home to unique biodiversity – and yet they are among the most threatened ecosystems worldwide. Unlike in terrestrial and marine ecosystems, however, biodiversity loss in freshwaters is rarely the focus of public attention and action. I would like to change that. With funding for the next five years, I will continue exploring our largest freshwater inhabitants: freshwater megafauna. The sheer size of these species means they require large habitats. In addition, many of them connect habitats in water and on land, e.g. through food intake and excretion, or large-distance movement across different ecosystems over the course of their life cycles, e.g. to reproduce. Unfortunately, the majority of these fascinating species are greatly threatened by human impacts – but they do not seem to be easily replaceable, considering their size and ecological roles alone. I therefore wish to explore what happens to the stability of ecosystems or the functions provided, when these mega species disappear from ecosystems. I am also keen to investigate how we humans perceive freshwater megafauna, and how these insights can be used for conservation schemes. One example would be establishing flagship species or umbrella species – freshwater pandas, as a colleague once said – whose protection would simultaneously ensure the protection of numerous other species,” states Jähnig, describing the motivation behind her activities.

Congratulations, Professor Jähnig – we are most delighted to have you on board!

About the Leibniz-Institute of Freshwater Ecology and Inland Fisheries (IGB):

“Research for the future of our freshwaters” is the mission of the Leibniz-Institute of Freshwater Ecology and Inland Fisheries (IGB). IGB is Germany’s largest and one of the leading international research centres for freshwaters. It combines basic and preventive research, trains young scientists and advises decision-makers and society for a sustainable freshwater management. Its key research activities include the long-term development of lakes, rivers and wetlands and the effects of climate change, the renaturation of ecosystems, the conservation of aquatic biodiversity, and technologies for sustainable aquaculture. Work is conducted in close cooperation with universities and research institutions from the Berlin-Brandenburg region as well as worldwide. IGB is a member of the Forschungsverbund Berlin e. V., an association of eight research institutes of natural sciences, life sciences and environmental sciences in Berlin. The institutes are members of the Leibniz Association. https://www.igb-berlin.de/en

<
Sonja Jähnig has been conducting research at the Leibniz-Institute of Freshwater Ecology and Inland ...
Photo: David Ausserhofer/IGB

Sonja Jähnig has been conducting research at the Leibniz-Institute of Freshwater Ecology and Inland Fisheries (IGB) since 2014. 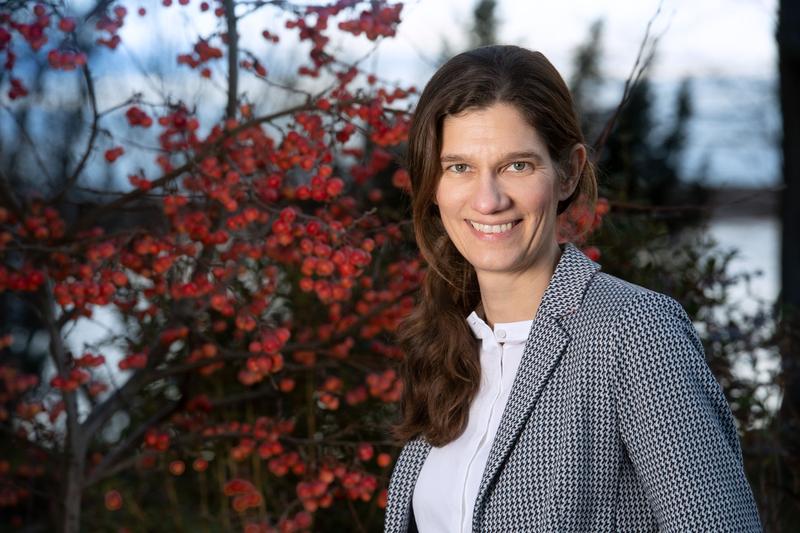