Melatonin controls the body clock – high melatonin levels make us feel tired in the evening. However, the hormone also plays an important role in animals’ biological rhythms. Artificial light at night – light pollution – can suppress the production of melatonin in fish, even at very low light intensities, a finding established by researchers from the Leibniz-Institute of Freshwater Ecology and Inland Fisheries (IGB).

Melatonin regulates the day-night rhythm in humans and vertebrates. Organs, tissue and cells set their internal clock depending on the level of this hormone. As a result, melatonin also controls processes such as reproduction and growth. Vertebrates and humans detect differences in ambient brightness via photoreceptors, e.g. on the retina of the eye. Bright light perceived by these receptors suppresses the production of melatonin, while the hormone level is elevated during the dark phase. Artificial light at night may disturb melatonin levels.

The team of IGB researchers investigated melatonin production in European perch. During the day, all fish were exposed to daylight. At night, lighting varied depending on the group: the control group spent the night in complete darkness, whereas the other three groups were exposed to light intensities at 0.01, 0.1 and 1 lux. After ten days, the scientists measured melatonin levels at three-hour intervals over a period of 24 hours. The result: even the lowest light intensity of 0.01 lux was enough to suppress melatonin production; higher light intensities led to an increasingly strong gradual reduction of melatonin.

“The astonishing thing is that the intensities of urban sky glow are enough to suppress melatonin production in fish,” stated lead author Franziska Kupprat from IGB. Large areas throughout the world are affected by this kind of light pollution. This is because light emitted by lighting installations radiates into the sky, and reflects off clouds and particles, creating significant sky glow that extends further than the actual light radius of the light source.

Light intensity had no impact on the rhythm of melatonin production. All specimens experienced an increase in melatonin formation during the course of the afternoon, peaking at night. “Previous studies have shown that higher intensities of night light, such as 10 and 100 lux, also affect the melatonin rhythm in perch. This is because the melatonin produced at night had declined to such an extent that it no longer differed to low values measured during the day,“ explained IGB’s Dr. Franz Hölker.

Fish spend much of their lives asleep, although this is not apparent because they have no eyelids. Like with all living things, fish need sleep to regenerate. IGB’s Professor Werner Kloas, leader of the study, explained the effects of disturbed melatonin levels: “Our previous research methods do not enable us to assess whether urban fish experience a lack of sleep due to light pollution. However, we assume this is the case because melatonin is an important factor influencing sleep in vertebrates, including fish. One thing for sure is that other body functions such as immune defence, growth and reproduction can be disturbed by altered melatonin production.“

<
The European perch is sensitive to light pollution.
Michael Feierabend

The European perch is sensitive to light pollution. 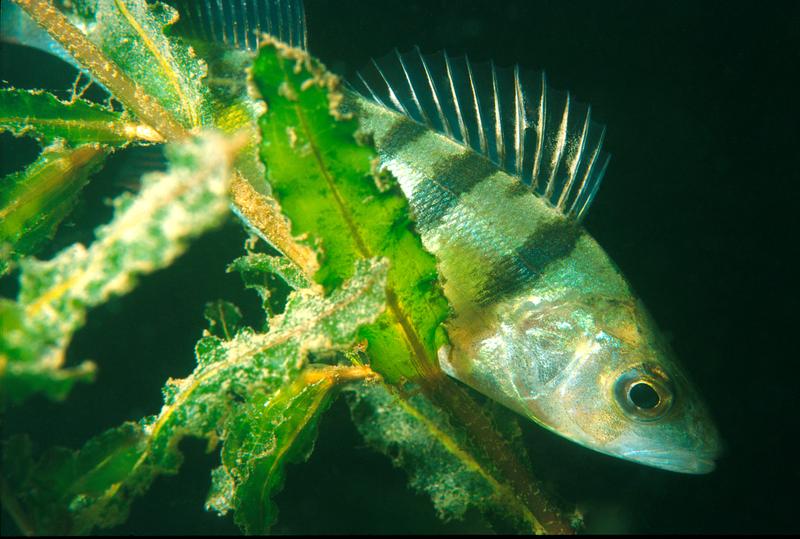