Heavy-load vehicle traffic is responsible for 6 percent of the CO2 emissions in the European Union. Solar electricity generated directly on the vehicle can improve this balance by 5 to 7 percent. In the “Lade-PV” project under the direction of the Fraunhofer Institute for Solar Energy Systems ISE, four industrial companies and two Fraunhofer institutes want to demonstrate the market feasibility of PV applications in the heavy-load transport. The aim is to develop an overall concept that makes the widespread use of integrated PV modules on electrical and other commercial vehicles (over 3.5 tons commercial load) possible.

In the coming three years, not only singular components, such as PV modules and power electronic units, but also manufacturing and production concepts will be developed within this project in order to establish an efficient supply chain between the branches involved. The practical implementation of the prototypes shall be demonstrated on an electrical heavy-load truck.

“Trucks provide lots of area with great sun exposure and electric-drive vehicles are equipped with large batteries. This combination presents an ideal situation for generating valuable on-board electricity with photovoltaics. This increases the driving range and all of that is provided with 100 percent renewable energy”, explains Dr. Harry Wirth, division director of Photovoltaics, Modules and Power Plants at Fraunhofer ISE.

Researchers at Fraunhofer ISE are developing PV modules that are both light and robust for two different cases of applications, i.e., subsequent on-roof installation (retrofit) and full-integration into the truck body. The requirements on the vehicle-integrated PV module are demanding: The modules shall have a space utilization level of over 90 percent, be vibration-proof, resistant to shear and bending forces and easy to install. In addition, the modules shall add a maximum additional weight of 2.6 kilograms per square meter to the vehicle. To manufacture these new, light-weight VIPV modules in series production, a production concept will developed and the company Sunset Energiekonzept GmbH will accordingly modify its existing production line. The module prototypes will be integrated into the bodies of electrical commercial vehicles by the TBV Kühlfahrzeuge GmbH, a company specializing in the design and production of refrigerated trucks.

Suitable material combinations will be tested and a concept for retrofitting truck bodies, including the cabling and integration of the power electronics, are to be developed. To connect the solar module into the existing bus systems of the commercial vehicle, power electronic components will be developed, tested and certified for use on the demo vehicle by the project partner M&P motion control and power electronics GmbH. Due to the limited installation space and the low weight requirements, new semiconductor technologies shall be used. Such components operate at high frequencies and thus have a more compact design.

The Fraunhofer Institute for Transportation and Infrastructure Systems IVI is developing an energy forecasting model for the truck. Dependent on the vehicle load and the PV electricity produced along the various routes, projections are made for the driving range, loading periods and the electricity production.

The demo vehicle is a Framo electrical truck equipped with solar modules. It will be tested in the daily distribution operation of the Alexander Bürkle GmbH & Co. KG company throughout the Freiburg region. As part of a measurement campaign, the irradiation potential of the routes travelled will determined. The development of the energy performance and the solar module stability will be regularly tested under real conditions.

As a final step, the consortium will draw up a workflow concept for the cost-effective end-to-end production of PV-active truck bodies, analyzing both the manufacturing costs and the economic efficiency for the user. “We not only want to develop the technology, but also demonstrate that trucks can use onboard PV to meet over five percent of their energy demand. Calculations show that four to six thousand kilometers additional driving range per year are possible. Vehicle-integrated PV (VIPV) is worthwhile for manufacturers and operators of solar electric commercial vehicles,” explains Christoph Kutter, project head at Fraunhofer ISE.

<
Electrical trucks and other commercial vehicles can save energy with solar energy.
© Schnitzler Werbung Freiburg GmbH

Electrical trucks and other commercial vehicles can save energy with solar energy. 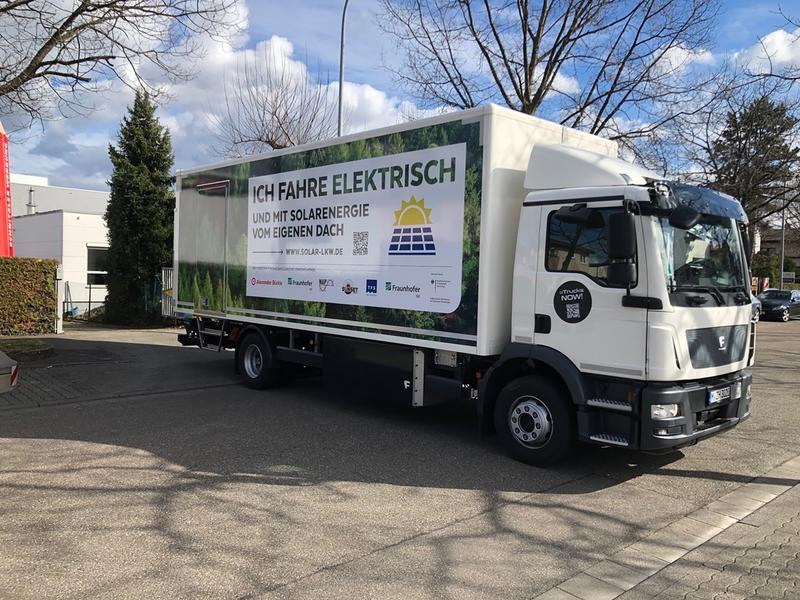