A new door to the quantum world: when an atom absorbs or releases energy via the quantum jump of an electron, it becomes heavier or lighter, according to Einstein’s theory of relativity (E = mc²). However, the effect is minuscule for a single atom. Nevertheless, the team of Klaus Blaum and Sergey Eliseev at the Max Planck Institute for Nuclear Physics has successfully measured this tiny change in the mass of individual atoms for the first time. In order to achieve this, they used the ultra-precise Pentatrap atomic balance at the institute in Heidelberg. The team discovered a previously unobserved quantum state in rhenium, which could be interesting for future atomic clocks.

Astonishing, but true: if you wind a mechanical watch, it becomes heavier. The same thing happens when you charge your smartphone. This can be explained by the equivalence of energy (E) and mass (m), which Einstein expressed in the most famous formula in physics: E = mc² (c: speed of light in vacuum). However, this effect is so small that it completely eludes our everyday experience. A conventional balance would not be able to detect it.

But at the Max Planck Institute for Nuclear Physics in Heidelberg, there is a balance that can: Pentatrap. It can measure the minuscule change in mass of a single atom when an electron in it absorbs or releases energy via a quantum jump, thus opening a new world for precision physics. Such quantum jumps in the electron shells of atoms shape our world – whether in life-giving photosynthesis and general chemical reactions or in the creation of colour and our vision.

An ant on top of an elephant

Rima Schüssler, now a postdoctoral fellow at the Max Planck Institute for Nuclear Physics, has helped build Pentatrap since completing her Master’s thesis in 2014. She is the lead author of a paper on an unexpected discovery made in a collaboration at the Max Planck PTB Riken Centre: In rhenium, there is a previously undiscovered electronic quantum state with special properties. Schüssler uses the following analogy to describe the degree of sensitivity with which Pentatrap can detect the jump of an electron into this quantum state via the mass change of a rhenium atom: “By weighing a six-tonne elephant, we were able to determine whether a ten-milligram ant was crawling on it”.

Pentatrap consists of five Penning traps. In order for such a trap to be able to weigh an atom, it must be electrically charged (i.e. become an ion). Because rhenium was stripped of 29 of its 75 electrons, it is highly charged. This dramatically increases the accuracy of the measurement. The trap captures this highly charged rhenium ion in a combination of a magnetic field and a specially shaped electric field. Inside, it travels in a circular path, which is intricately twisted into itself. In principle, it can be thought of as a ball on a rope, which is allowed to rotate in the air. If this is done with constant force, a heavier ball rotates slower than a lighter one.

In Pentatrap, two rhenium ions rotated alternately in the stacked traps. One ion was in the energetically lowest quantum state. When the second ion was generated, an electron was randomly excited into a higher state by supplying energy. In a sense, it was the wound watch. Because of the stored energy, it became marginally heavier and thus circulated slower than the first ion. Pentatrap precisely counts the number of revolutions per time unit. The difference in the number of revolutions yielded the increase in weight.

Using this method, the team discovered an extremely long-lived quantum state in rhenium. It is metastable (i.e. it decays after a certain lifetime). According to the calculations of theoreticians from the institute led by Zoltán Harman and Christoph H. Keitel, the University of Heidelberg, and the Kastler Brossel Laboratory in Paris, this is 130 days. The position of the quantum state also agrees quite well with model calculations using state-of-the-art quantum mechanical methods.

Such excited electronic states in highly charged ions are interesting for basic research as well as for possible application in future atomic clocks as researched by the working group of José Crespo López-Urrutia at the Institute in cooperation with the Physikalisch-Technische Bundesanstalt (PTB). For them, the metastable state in rhenium is attractive for several reasons. First, because of its longevity, it corresponds to a sharp orbital frequency of the electron around the atomic nucleus. Second, the electron can be excited with soft X-ray light to jump into this quantum state. In principle, such a clock could tick faster and therefore even more accurately than the current generation of optical atomic clocks. However, according to Ekkehard Peik, who is in charge of the “Time and Frequency” Department at PTB and who was not involved in the work, it is still too early to speculate whether the discovery could be suitable for a new generation of atomic clocks.

“Nevertheless, this new method for discovering long-lived quantum states is spectacular”, stresses the physicist. He imagines that atomic clocks working with such new quantum states could initially offer a new test field for basic research. Because the rhenium ions lack many mutually shielding electrons, the remaining electrons feel the electric field of the atomic nucleus particularly strongly. The electrons therefore race around the nucleus at such high speeds that their motion must be described using Einstein’s theory of special relativity. With the new atomic balance, it would also be possible to test with high precision whether special relativity and quantum theory interact as described by this theory.

In general, the new atomic balance offers a novel access to the quantum-like inner life of heavier atoms. Because these consist of many particles – electrons, protons, and neutrons – they cannot be calculated exactly. The atomic models for theoretical calculations are therefore based on simplifications, and these can now be checked extremely accurately. It might be possible to use such atoms as probes in the search for unknown particles, which can be detected only by the extremely weak gravitational force. This dark matter is one of the greatest unsolved mysteries of physics.

On the path to new physics

An important step towards the access of new physics with atomic-physical methods was also achieved with PENTATRAP [Phys. Rev. Lett. 124, 113001]. The Heidelberg researchers carried out mass measurements on a chain of five pairs of xenon isotopes. Using high-resolution laser spectroscopy on similar chains of other elements such as calcium and ytterbium, a linear relationship can be inferred from the small energy differences (isotope shift). Nonlinear deviations from this can, however, be an indication of new physics (further fundamental interactions, new particles, dark matter), which manifests itself under extremely precise observation – an alternative to high-energy experiments. Here too, close cooperation with theory (group of Zoltan Harman at MPIK) should be emphasized. The direct measurement of the binding energy of an electron in a highly charged ion shows a very good agreement with relativistic atomic structure calculations. This creates the basis e.g. for future high-precision tests of quantum electrodynamics.

Figure 1:
An extremely precise atomic balance: Pentatrap consists of five Penning traps arranged one above the other (yellow tower in the middle). In these identically constructed traps, ions in the excited quantum state and in the ground state can be measured in comparison. In order to minimize uncertainties, the ions are also moved back and forth between different traps for comparative measurements.
Photo: MPI for Nuclear Physics

Figure 2:
Measurements at space-like temperatures: Pentatrap is located in a large superconducting magnet. The inside of the vessel is cooled to a temperature near absolute zero so that disturbing heat movements of the atoms are frozen. Because individuals in the room would influence the measurements by their body temperature, among other things, nobody is allowed to enter the laboratory during the experiment. The system is remote controlled.
Photo: MPI for Nuclear Physics

<
An extremely precise atomic balance: Pentatrap consists of five Penning traps arranged one above the ...
Photo: MPI for Nuclear Physics
None

<
Measurements at space-like temperatures: Pentatrap is located in a large superconducting magnet. The ...
Photo: MPI for Nuclear Physics
None

An extremely precise atomic balance: Pentatrap consists of five Penning traps arranged one above the other (yellow tower in the middle). For detailed caption, see text. 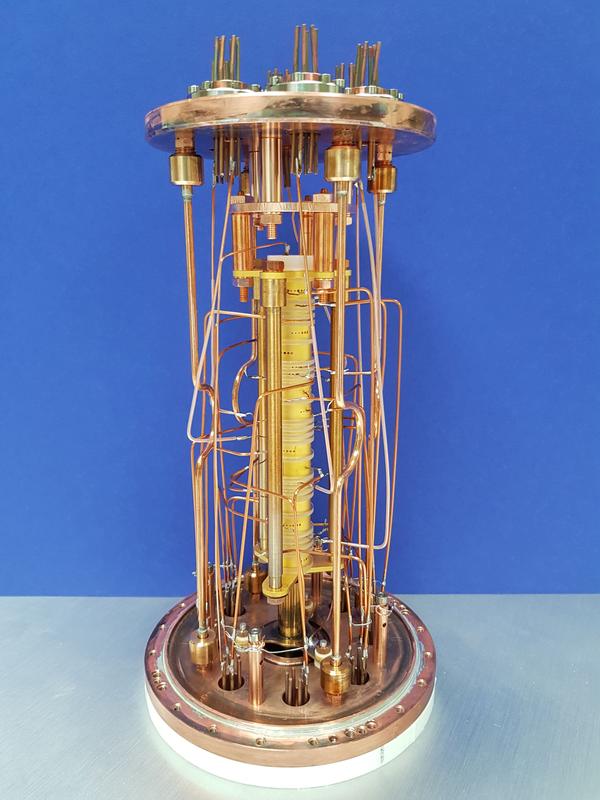 Measurements at space-like temperatures: Pentatrap is located in a large superconducting magnet. The inside of the vessel is cooled to a temperature near absolute zero. For detailed caption see text. 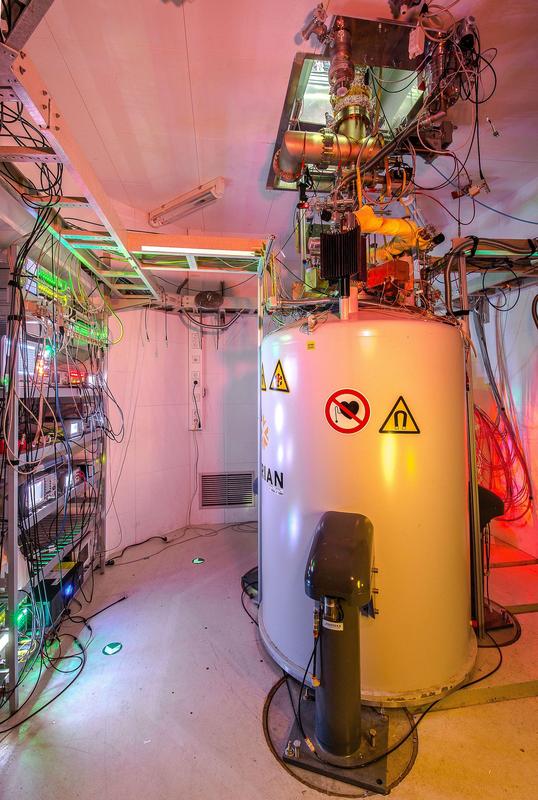