T6P - the “insulin” of the plants
Advanced Search ?

Home > Press release: T6P - the “insulin” of the plants

How a small molecule influences sugar metabolism in plants

In a process known as photosynthesis, plants use the energy of sunlight to produce sugar out of water and carbon dioxide in their leaves. The sugar is transported from the leaves to the other parts of the plant to provide carbon and energy for growth and the synthesis of storage reserves. Franziska Fichtner, John Lunn and colleagues from the working group of Prof. Dr. Mark Stitt from the Max Planck Institute of Molecular Plant Physiology in Potsdam-Golm, together with scientists from international research institutions, are researching a small molecule that, like insulin in humans and animals, regulates sugar metabolism and transport and the synthesis of storage reserves in plants.

T6P the “insulin” of plants
Insulin is a hormone that helps humans and other animals to regulate their carbohydrate metabolism. After eating sugary or starchy foods, blood glucose levels rise, triggering release of insulin. This acts as a signal for the muscles and other cells to take up glucose, and for excess sugar to be converted to storage reserves in the liver and fatty tissues. When blood glucose levels fall, another hormone, glucagon, triggers the conversion of these storage reserves back into glucose. Together, these two hormones maintain an optimal level of glucose in the blood. Plants also need to regulate their sugar metabolism, to ensure that they do not starve at night when photosynthesis is not possible, and to make the best use of their carbohydrate supply for growth and reproduction. However, plants do not have insulin. So how do they regulate their sugar metabolism, transport and storage?

How do plants regulate their sugar balance?
Researchers at the Max Planck Institute of Molecular Plant Physiology in Potsdam have been working on solving this riddle for a long time. John Lunn explains: “We discovered that a small molecule called trehalose-6-phosphate (T6P) plays a similar role to that of insulin in humans.” T6P is an intermediate in the synthesis of a sugar called trehalose. Trehalose is found in bacteria, fungi and lower animals and is used to transport and store carbohydrate, as well as being a stress protectant. Trehalose is also found in primitive plants, like mosses and algae, where it shares these functions with a chemically similar sugar - sucrose. During the evolution of higher plants, sucrose became the most common sugar and took over all the main functions of trehalose. This allowed T6P to evolve a new role in a process known as ‘neofunctionalisation’. Like the insulin response to high blood glucose in animals, T6P levels in plants rise as their sucrose levels increase. If the plant is producing too much sucrose during photosynthesis, rising T6P in the leaves diverts some of the newly fixed carbon to organic and amino acids. At night, when sucrose is made from starch reserves, high T6P inhibits starch breakdown if sucrose is being made faster than the plant can use it for growth. In the growing parts of the plant, the level of T6P signals how much sucrose is available for growth and accumulation of storage reserves. Franziska Fichtner adds: “We know that T6P also affects developmental transitions, such as shoot branching and flowering, which determine the future sugar requirements of the plant. For example, flowering leads to seed formation, which requires sugar and energy so that the seeds can grow and ripen. ” By linking development to the supply of sugar, T6P helps plants maximize seed yield without running out of carbon before seed production is completed.

Investigating the regulation of plant sugar balance with the help of mutants
The insulin-like function of T6P in signalling and regulating sucrose levels in plants is now well established. However, detailed knowledge of how and where T6P signalling operates was lacking. In their article, which has just been published in the renowned journal "The Plant Cell", Dr. Fichtner and her colleagues took an important step in answering these questions. T6P is produced by the enzyme trehalose-6-phosphate synthase 1 (TPS1 for short). The function of TPS1 was investigated in Arabidopsis thaliana, the model plant of many plant researchers. They used two different approaches to “tag” the TPS1 protein with either a fluorescent or enzymatic marker, allowing the location of the protein to be visualized under the microscope. "We were initially very surprised to find that the TPS1 protein is located in specific regions of the leaf where sucrose is moved into the phloem, which is the sugar transport system in plants" explains Dr. Fichtner. “This “phloem-loading zone” connects those parts of the leaf where sucrose is made to the growing parts of the plant where sucrose is consumed, and so is a strategically important site for monitoring how much sugar is being made and how much is being used” adds John Lunn. The scientists next asked which parts of the TPS1 enzyme are necessary for T6P signalling to work correctly. To do this, they modified the TPS1 gene in various ways and introduced the modified gene variants into an Arabidopsis mutant that is unable to grow properly because it has no TPS1. Some variants of the TPS1 gene allowed the plants to grow normally, but others did not. These experiments revealed that, in addition to the catalytic centre, other parts of the TPS1 protein are needed for T6P signalling to function properly. Some of these plants can be likened to insulin-deficient diabetic patients, as they are unable to regulate their sugar levels correctly. These plants will be used to study in more detail how sugar metabolism is controlled by T6P and why it is so disastrous for the plant when this system goes wrong.

Dr. Franziska Fichtner
Since January 2020
The University of Queensland
f.fichtner@uq.edu.au

Scheme of sucrose synthesis and transport in the leaf and localization of the T6P synthesizing protein, TPS1, in the shoot and root vasculature and shoot tip

<
Scheme of sucrose synthesis and transport in the leaf and localization of the T6P synthesizing prote ...

Scheme of sucrose synthesis and transport in the leaf and localization of the T6P synthesizing protein, TPS1, in the shoot and root vasculature and shoot tip 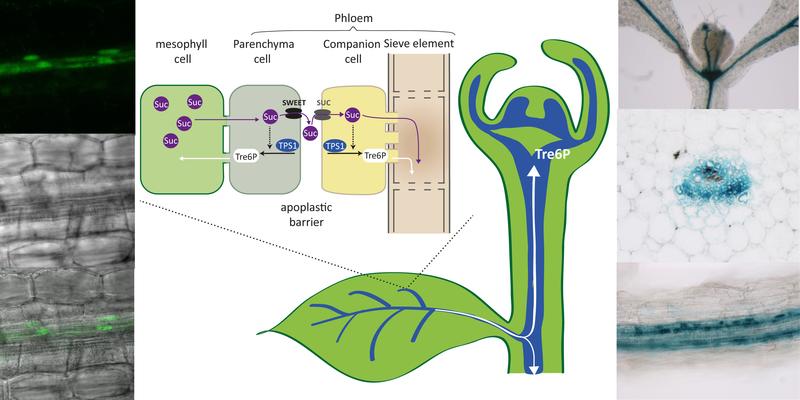